Thanks to one of our veteran writers and colleagues in the Crossings method, the Rev. Dr. Steve Kuhl, for contributing this piece a few years back:

THE INTERSECTION OF TWO FEASTS

John 2:1-11
Second Sunday after the Epiphany
Analysis by Steven Kuhl

1 On the third day there was a c, and the mother of Jesus was there. 2 Jesus and his disciples had also been invited to the wedding. 3 When the wine gave out, the mother of Jesus said to him, “They have no wine.” 4 And Jesus said to her, “Woman, what concern is that to you and to me? My hour has not yet come.” 5 His mother said to the servants, “Do whatever he tells you.” 6 Now standing there were six stone water jars for the Jewish rites of purification, each holding twenty or thirty gallons. 7 Jesus said to them, “Fill the jars with water.” And they filled them up to the brim. 8 He said to them, “Now draw some out, and take it to the chief steward.” So they took it. 9 When the steward tasted the water that had become wine, and did not know where it had came from (though the servants who had drawn the water knew), the steward called the bridegroom 10 and said to him, “Everyone serves the good wine first, and then the inferior wine after the guests have become drunk. But you have kept the good wine until now.” 11 Jesus did this, the first of his signs, in Cana of Galilee, and revealed his glory; and his disciples believed in him. 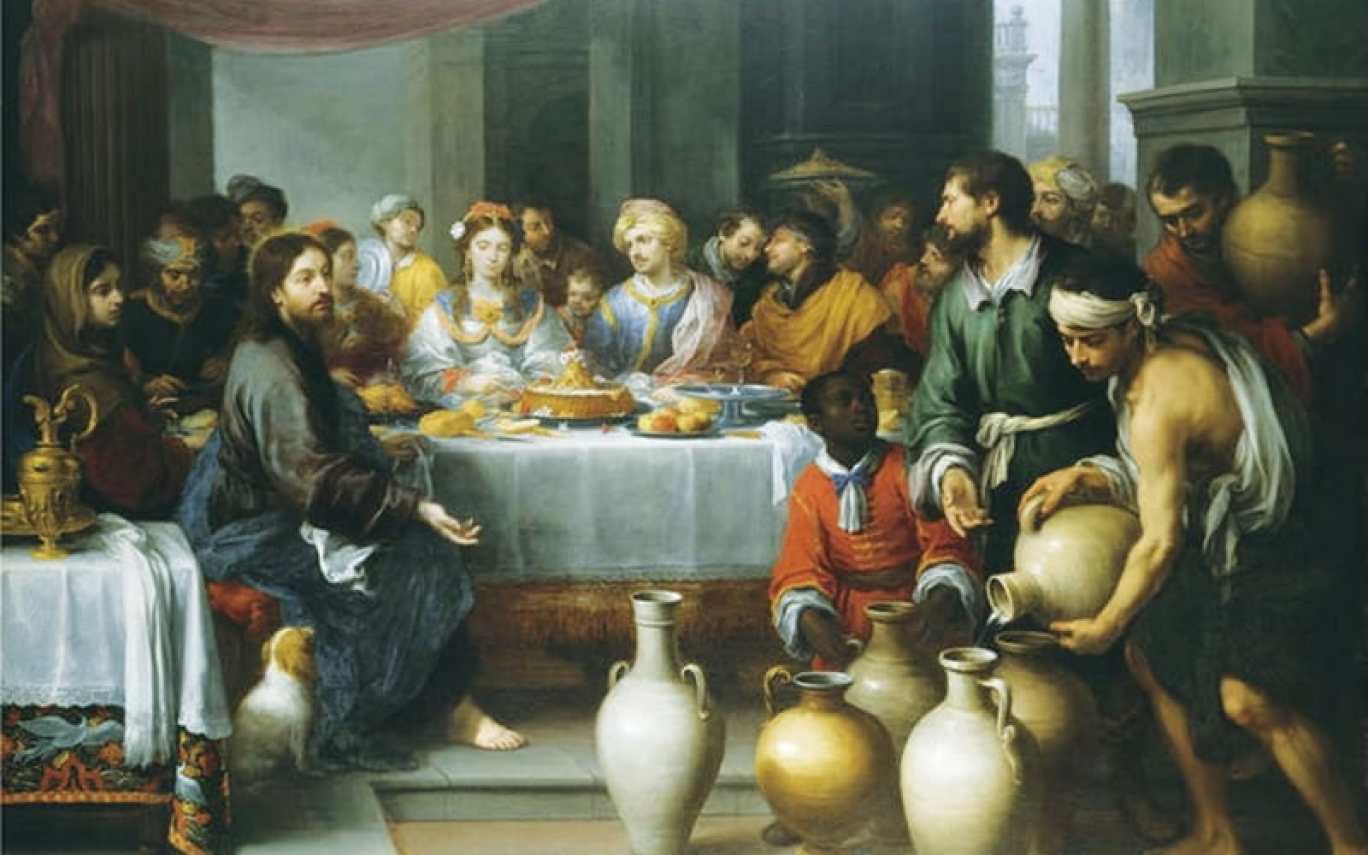 DIAGNOSIS: The Feast of the Old Creation–Running Out, Inferior

The joyous scene in this week’s text, the wedding feast in Cana of Galilee, is a scene that is repeated over and over again in every village, hamlet, and city throughout the world. Weddings are public–or better, creational events (cf. Gen. 2). They celebrate the fact of creation and our participation in it. They mark the fact that life originally had God’s blessing and that its continuation is rooted in that blessing. So what is the problem? This celebration and continuation of creation conceals the fact that we live as though the fact of creation–and the immediate joy we get from it–is the whole story about life. It is not. The truth is that this creation is old (John prefers the word “world” to designate this fact), meaning, it is impure (cf. v. 6), decaying, “running out” because of sin. In the text, the celebration is “running out of wine” (the symbol of God’s blessing, v. 3), and there is no hope that this old creation can sustain itself or us. True, the stewards of this wedding feast, this Old Creation, like the experts of our own day (i.e., scientists, economists, intelligent agents, etc.), know something about this. They know something about the dangers our excesses place on this old creation. But without some remedy, they weren’t about to tell.

The deeper problem is that we actually work at concealing the truth about the “oldness” of this creation, the sign of which, in this text, is drunkenness (v. 10). Drunkenness is a kind of faith–a misguided, false faith, to be sure, but nevertheless, a kind of faith born of sin that seeks to sustain our joy on the basis of a delusion or illusion. Drunkenness also signals our misuse of the blessings of the Old Creation (the wine of the Old Creation): a misuse that both makes them impure (cf. v. 6) and deludes us into thinking that we are okay. No one denies that the blessings of the Old Creation are good things from God. They are. But to misuse them (above all, by imagining that we deserve them or that they won’t run out) is to anesthetize ourselves from the truth about their temporal nature and, thus, to place our faith in and bind our fate to temporal things.

Step 3: Final Diagnosis (Eternal Problem): “The Wine Gave Out” (v. 2): The End of the Old Creation

The still deeper problem is the reason why the wine gives out, why this world, the Old Creation, is coming to an end. It is not simply a “natural event,” though we have to look elsewhere than this text to find it. The wine gives out because of God’s judgment/condemnation (cf. John 3:17-21) upon the sinful, delusional, drunken world: God’s withdrawal of his blessing from the creation, the curse of Genesis 3, as symbolized by the empty jars for the rite of purification (v. 6). They are empty not simply because there is no repentance, but because there is nothing in this Old Creation that can purify the delusional, drunken guests. Therefore, even as the celebration of Old Creation goes on, the truth of its impending end is all around. 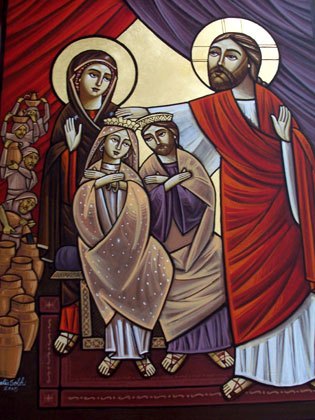 PROGNOSIS: The Feast of the New Creation-Overflowing, the Best

What makes this particular celebration of creation (the wedding in Cana of Galilee) different is that it has an unusual guest in its midst: Jesus. To be sure, at this point in the gospel, only his mother seems to be aware of his identity: that he is the source of hope, not only for creation’s guests, but for the whole, old, waning creation itself. As such, Mary knowing that is a symbol of the nascent church in the midst of the Old Creation and its celebrations, but more on that later (see John 19:26-27). Moreover, Jesus’ deed of turning water into wine is not itself the solution to the problem, but “a sign” of the solution that is yet to come. The problem is not that the blessings of the Old Creation are lacking. The problem is that the blessings of the Old Creation are “inferior” (v. 10) because they are insufficient to make purification for sin. They are neither self-sustaining nor guest-redeeming. Nevertheless, Jesus’ words, “My hour has not yet come” (v. 4), do signal the deed that is the solution, although at this point in the story it still remains to be done. It is his death and resurrection. (Note John’s sign-significant reference to all this happening “on the third day,” v. 1). In his incarnation, death and resurrection, Jesus takes the old dying creation to himself, purifies it through himself, and makes it new in himself. Jesus is that unique wedding guest who can turn the waning joys of the Old Creation into the eternal joy of the New Creation.

Step 5: Advanced Prognosis (Internal Solution): “His Disciples Believed in Him” (v. 11): Participating in the New Creation

Disciples participate in this New Creation (with its purification and blessing) by faith in Christ, crucified and raised. Faith is not an illusion or a delusion, it is not drunkenness or evasion. Rather, it is a clear-sighted, wide-eyed response to the fact that God in Christ has “revealed his glory” (v. 11) to save and redeem us through the cross. Faith in Christ sees what is “inferior” and what is “superior.” It distinguishes between the blessings of creation and the blessings of Christ. This it does not in order to pit one against the other but in order that the purposes of God in the Old Creation (and its blessings) and the purposes of God in the New Creation (and its blessings) might be honored, respected and enjoyed for what they are. Faith in Christ is that unique posture by which we believers “fill the jars” of our old lives with water-call it repentance-only to draw out of those jars the best of all possible wines-call it the sinner-forgiving, life-giving, joy-sustaining gift of Christ himself.

Step 6: Final Prognosis (External Solution): “You Have Kept The Good Wine Until Now” (v. 10): Celebrating the New Creation in the Midst of the Old

Although the New Creation with its superlative benefits comes late on the scene, it does not simply cast off the Old Creation or throw cold water on its celebrations. Although in the face of the impending wine shortage, the stewards of the feast in our text may have thought it was time to close the party, Jesus did not-and neither do we. Indeed, “that hour has not yet come” (v. 4)-although, all we will need for that hour is now provided us in Jesus Christ, crucified and raised. True, the New Creation has its own unique feast, the Eucharist. But those who celebrate that feast (the church, believers in Christ, brothers and sisters of Jesus, sons and daughters of Mary-the images in the text are many) never cease to heed the command to “go in peace” back into the Old Creation and to celebrate and serve it with gusto and “thanks to God.” Indeed, Christians are more equipped than anyone to live in, render service to, and give thanks for the life of the Old Creation. But we do so without any illusions or delusions concerning its transitory nature. We do so with Jesus’ words ringing in our ears: “fill the jars” with the water of repentance and then “draw out” the wine of forgiveness and eternal life. In a sense, Christians, like their Lord are also rather unique guests there too and like Mary, his mother, they are eager to point others to the reason for their hope-Jesus himself. Of him we are eager to say with Mary, “Do whatever he tells you” (v. 5). For the wine of the New Creation is the wine that purifies and that exists in great, unending abundance!