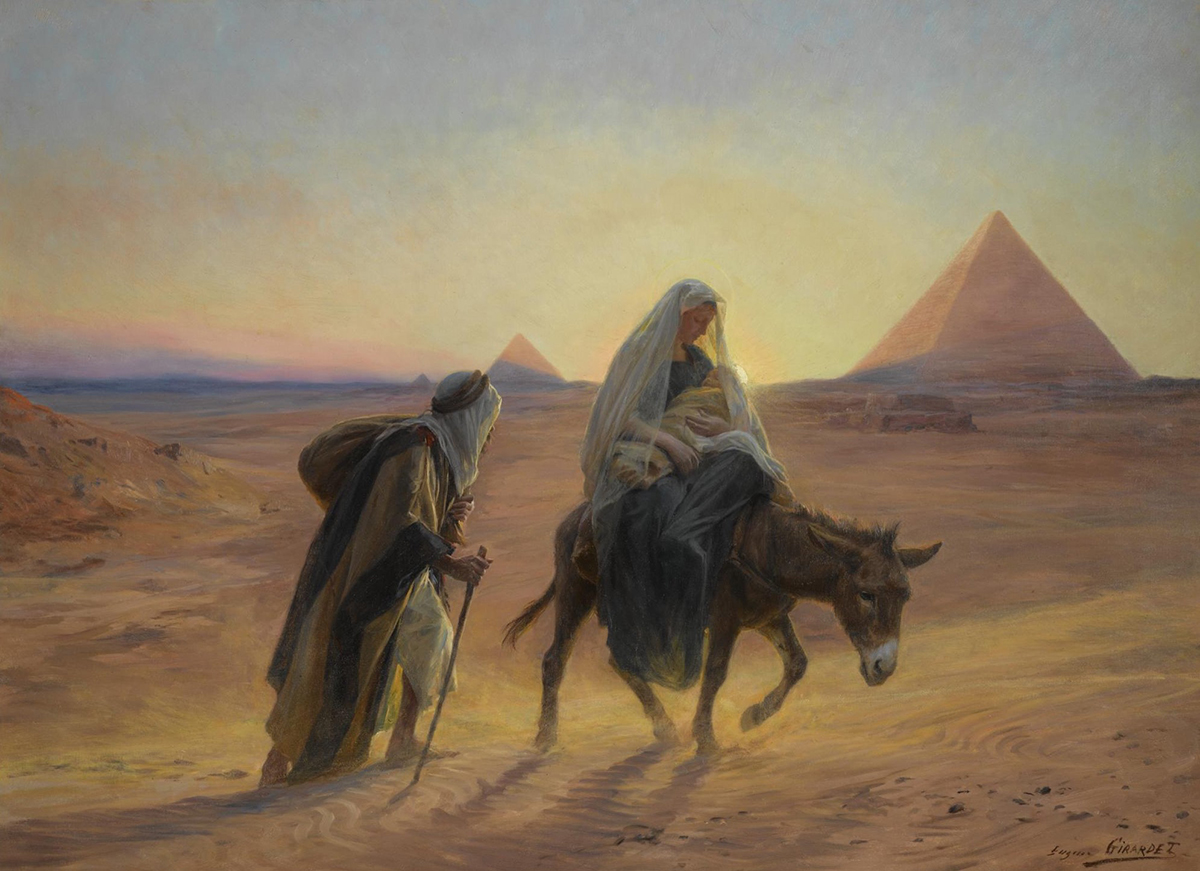 Is nothing sacred anymore? Here we are a few days after Christmas and we are talking about the slaughter of innocent children.

Herod the Great, the Roman puppet king of Judea, loved to build big buildings as a testimony to his ego. But Herod was also insecure, paranoid and utterly brutal. He was notorious for seeing a palace conspiracy around every corner and did not hesitate to murder anyone whom he thought could become a rival, including his own children.

When the Magi showed up in Jerusalem following a star and looking for a newborn king, he became even more suspicious. He pretended to admire this newborn king but privately planned to assassinate this potential rival. When the Magi refused to cooperate, he went into a rage and ordered all the children in and around Bethlehem two years of age and under murdered. When the slaughter ended, there was a sickening silence, broken only by the weeping of mothers. Perhaps some quoted the prophet Jeremiah who wrote these words when Jerusalem was destroyed and children were slaughtered by the invading Babylonian hordes in 587 B.C.

“A voice is heard in Ramah, wailing and loud lamentation; Rachel weeping for her children because they were no more.”

This story reminds us of the kind of world into which Christ was born. It was a cruel and dangerous world, inhabited by paranoid and jealous tyrants, like Herod, . . . . Hitler, Stalin, Saddam Hussein, Kim Jong Il, and the list goes on and on. You can add your own names to the latest list of cruel and brutal tyrants who only care about their own power and will do anything to preserve it.

No wonder so many mothers in this world are weeping.

Jesus came into a world just like ours where too many mothers are weeping for their children whose bodies far too often have been malnourished, stunted in the womb, with lives deprived of educational opportunities that would have made them prosper. This is a world where too many mothers have mourned the death of their babies at Auschwitz and Dachau, Uganda, Gaza, Baghdad, Syria, Sudan, let alone Bethlehem. These children never asked to be born, but crazed tyrants and terrorists murdered, slaughtered and butchered them anyway.

It is so unjust, unfair and unjustified. What kind of world is this?

Step 3: Final Diagnosis (Eternal Problem): What Kind of God Is This?

How can we continue to believe that God cares when God either refuses to end such suffering or is unable to do anything about it? What kind of God is this? Certainly not one worth believing in or worshiping. 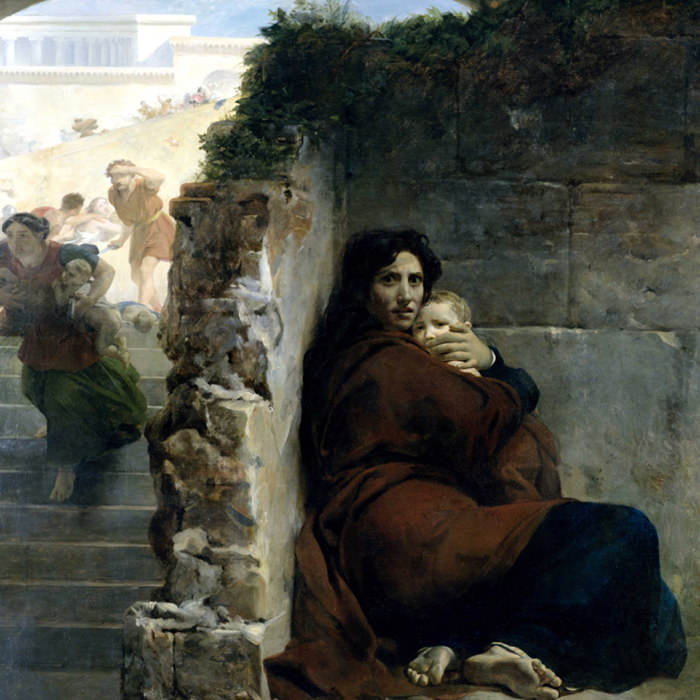 Jesus escaped his death by fleeing with his family into Egypt. But he did that not to escape suffering but to become further and further enmeshed in the mess that is this world. Jesus grew up and took on a mission that led him to join us and a world awash in tears. As a friend of sinners, outcasts, innocent victims and the babies brutally slaughtered at Bethlehem, Jesus goes to the cross to become a victim with all the other victims of this world.

That is what Christmas is for. God came to join us in the midst of our suffering to wipe away the tears. God so loved the world that he got right down into the dirt and decay of our lives so that we would not be alone.

There God sees Rachel’s tears, Mary’s tears, and our tears. There God sees tyrants and their thugs brutalize the innocent. God comes to shed Christmas tears with all the Rachels of Babylon and Bethlehem. Finally, he cries with them from the cross, “My God, my God, why have you forsaken me?”

However, that is not the end. “On the third day” this one who died with us is raised from the dead. His suffering, the suffering of the innocent babies of Bethlehem and the suffering of all the innocent victims of this world are not the last word. God’s love is the last word. God is not going to leave us gasping without hope. God will deliver us. God will wipe away the tears of every weeping Rachel.

That is how Matthew saw this horrible slaughter of the innocent babies of Bethlehem. He saw more in this tragedy than just the shedding of innocent blood. With the eyes of faith, he saw not just another random and senseless human tragedy. He saw the unfolding of God’s plan. He saw the fulfillment of the words of Jeremiah first uttered 600 years before when the prophet said that Rachel, the wife of Jacob and the mother of Israel, was mourning for her children carried off into exile by the Babylonians. Despite this tragedy, Jeremiah believed there was hope for the future. One day those exiles would return home from their exile. Israel had a reason to hope even through horrendous exile and suffering. They could believe in a gracious God even though their world was falling apart.

The escape of Jesus from the slaughter of those innocent babies in Bethlehem was not just a tragedy for those who died, but his deliverance was part of God’s larger plan of redemption. Because of the baby born in Bethlehem who would one day go to the cross to shed his blood, God’s suffering people need not despair. Suffering and death are not the last word for God’s people. Jesus says to us, “Blessed are those who mourn. Blessed are you when people persecute you…. Blessed are you whose lives are falling apart and whose hearts, eyes and lives are drowning in Rachel’s tears. I will wipe Rachel’s tears away.”

Because of the babe of Bethlehem, we know that God has joined us in the midst of everything that would crush our faith and tempt us to believe that God has turned away from us. Christ has given us a future that no one can ever take away. When our tears are flowing and grief is crushing, when our losses rip into our hearts and we cry with Rachel and the mothers of Bethlehem, Christ changes those bitter tears of grief into tears of hope. Those Christmas tears will become Easter tears. Even though the soil of Bethlehem is drenched in blood, Christ has been this way before us. He has transformed even the darkest of tragedies into one more step in the unfolding of God’s gracious plan.

We are not swallowed by our own sorrow and grief. Instead, we are able to hear cries of sorrow and see the tears of grief in the suffering world around us. We shed tears for the innocent Rachels begging for mercy and vindication. Unafraid and unintimidated by the tyrants and thugs, we plunge into this world with the same love that Jesus offered to the Rachels of his world offering them the promise that, because of Christ their tears of sorrow can become tears of joy.