LIGHT IN THE DARKNESS, PEACE WITHOUT END

2 The people who walked in darkness have seen a great light;
those who lived in a land of deep darkness—on them light has shined.
3 You have multiplied the nation, you have increased its joy;
they rejoice before you as with joy at the harvest, as people exult when dividing plunder.
4 For the yoke of their burden, and the bar across their shoulders,
the rod of their oppressor, you have broken as on the day of Midian.
5 For all the boots of the tramping warriors and all the garments rolled in blood shall be burned as fuel for the fire.
6 For a child has been born for us, a son given to us;
authority rests upon his shoulders;
and he is named Wonderful Counselor, Mighty God, Everlasting Father, Prince of Peace.
7 His authority shall grow continually, and there shall be endless peace for the throne of David and his kingdom.
He will establish and uphold it with justice and with righteousness from this time onward and forevermore.
The zeal of the LORD of hosts will do this.

So, is this weird coronation his glorious moment, the fulfillment of that angelic cradle song? Is this peace on earth—hanging here in the darkness together, he and we assorted thieves who have counted the last of our booty? Listen. He’s singing one of the old psalms. Shall we join him? We shall. We do. 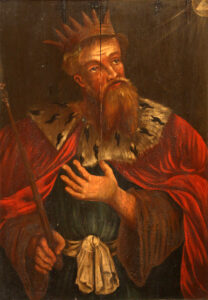 King Hezekiah on a 17th century painting by unknown artist in the choir of Sankta Maria kyrka in Åhus, Sweden. (Image produced by David Castor to the Wikipedia Project,
public domain)

Many of us can scarcely hear Isaiah’s familiar poem apart from its musical setting in Handel’s “Messiah.” But the music and light this oracle first celebrated actually mocks the songs, the light, and the reign of the son of God before whom we kneel at “Christmas.” Originally, the messiah this poem lauds wasn’t Mary’s newborn child in Bethlehem, but 25-year-old Hezekiah, the Lord’s anointed, as he ascended the throne of his father Ahaz. Deep darkness loomed. The powerful, ruthless Assyrians had just crushed and occupied much of the territory to the north. Now they marched toward Jerusalem. Are we doomed? No! The new king—our son and God’s as well—will save us. Soon we’ll be dancing and singing victory songs as we divvy up plunder and dispatch the corpses of our enemies just like old Gideon did when he slaughtered the Midianites. We shall overcome. God won’t let us down.

One can hardly tell the difference between God and the new king in this poem, which was largely the point in Isaiah’s day. The anointed king was God’s own son, served as God’s right arm, ruled on God’s behalf. Yes, he would be wonderful, wise, fatherly, and peace-loving, but he was also gibbor el (in the Hebrew)—not “Mighty God” of our English circumlocution, but “Warrior God.” Moreover, the ”zeal (kana) of YHWH Sabbaoth” will do all this—i.e., sets us dancing and sends our enemies to their flaming mass graves. This is el kana, the jealous God (Deut. 4:24) who brooks no rivals and spares no measure in holding onto what belongs to God—which is ourselves, God’s people. We trust God’s jealous love and God’s righteous rage on our behalf. O King, who rules in that God’s name, may you live forever! Trample and consume our enemies! Turn on the light!

Step 3: Final Diagnosis (Eternal Problem): The Valley of the Shadow

The darkness is deeper and more pervasive than we think. Isaiah’s poem dubs it tsal-maveth, which the KJV translates literally, both here and in Psalm 23, as “the shadow of death.” As the ancient prophet may or may not have known, we can never escape this kind of darkness by putting the light out of someone else’s eyes or having our anointed king do so. Our enemy’s death does not heal or make us whole (shalom). Light from the spoils-dividing bonfire soon flickers. When it dies, we stagger about in the dark again, often stumbling over and even into the graves of our enemies. 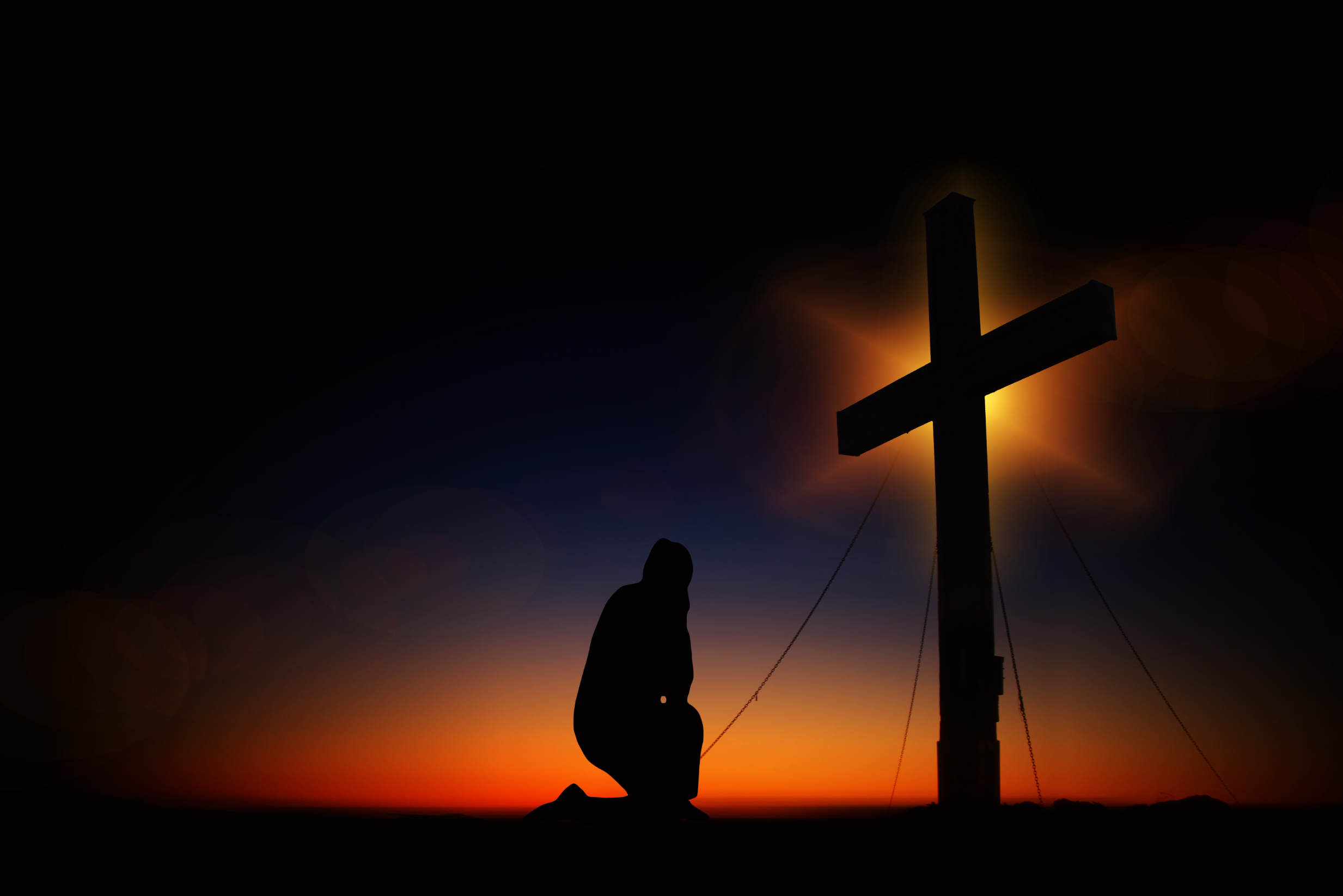 The Light of Christ (from Canva)

And precisely there, as we lie in the ashes, smeared with the blood of our momentarily successful raging, we find ourselves with him, another, latter-day son of David—anointed, crowned, enthroned, but hailed only with a coronation poem laced with taunts and proclaimed as ruler with a mocking meme: “The King of the Jews.” He, too, has walked into the shadow of death. He won’t escape it. He’s nailed there. But he says, “Come with me. Even now. Today. I promise you Paradise, the Garden of Eden, peace without end.”

Dare we trust him? Can a crucified guy keep such a promise? There is that story of his birth, we recall, and how the “glory of the Lord” lit up the darkness when the heavenly host sang of God’s glory and peace on earth. So, is this weird coronation his glorious moment, the fulfillment of that angelic cradle song? Is this peace on earth—hanging here in the darkness together, he and we assorted thieves who have counted the last of our booty? Listen. He’s singing one of the old psalms. Shall we join him? We shall. We do. At this point, he’s our last hope. Crucified with him, trusting him here in the darkness, our lives are bound to his. He says it’s good, indeed a gift, to be together, even here. And so it is.

We commend our lives to his care, and to the hands into which, with his last breaths, he sang his own life. And there—here—we find ourselves each morning when we wake anew to the light of God’s glory, the glory that shows itself not in enemy-stomping or righteous rage, but in mercy and compassion. We live his life now, giving our time and lives not only for the friendlies around us, but also for those who taunt us and mock our vision—his vision—of peace that has no boundaries. His light shines in the darkness. The shadow of death cannot overcome it.