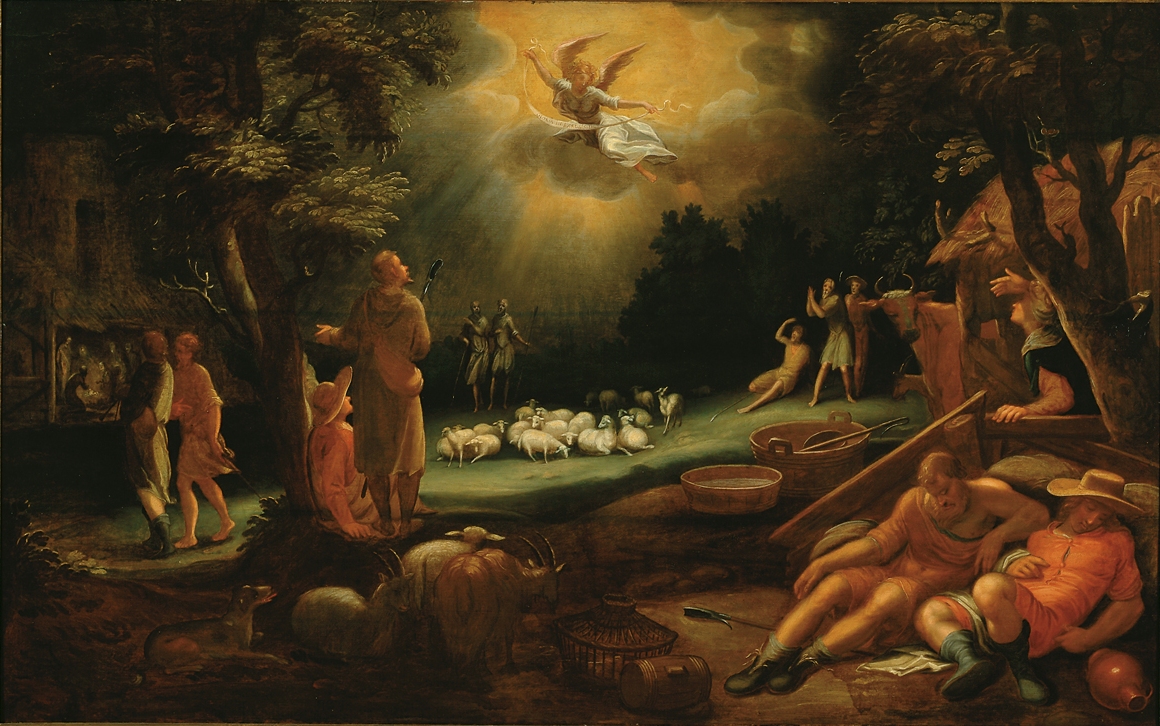 WHAT’S IN A NAME

Luke 2:15-21
The Name of Jesus
Analysis by Bruce K Modahl

15When the angels had left them and gone into heaven, the shepherds said to one another, “Let us go now to Bethlehem and see this thing that has taken place, which the Lord has made known to us.” 16So they went with haste and found Mary and Joseph, and the child lying in the manger. 17When they saw this, they made known what had been told them about this child; 18and all who heard it were amazed at what the shepherds told them. 19But Mary treasured all these words and pondered them in her heart. 20The shepherds returned, glorifying and praising God for all they had heard and seen, as it had been told them.
21After eight days had passed, it was time to circumcise the child; and he was called Jesus, the name given by the angel before he was conceived in the womb.

Better than bearing our sin, Jesus comes to bear our death. He defeats death as he comes newborn from the grave. He leaves our sins in the tomb.

Among those with ancestors from Spain and Portugal, Jesus is a common boys’ name. The Hebrew/Aramaic name is Joshua. The name may mean “God is salvation,” but it was a common boys’ name in Jesus’ day, as it is in ours. We call names such as Joshua theophoric: God bearing. A more apparent example is the name Christopher, bearer of Christ.

The name may be theophoric, but it is an ordinary name after all.

God has a track record of naming people. The names are ordinary enough. However, when God does the naming, the name always bears a promise. The promise to Mary was that the child she bears will be the Son of God. The shepherds passed on to her the promise they heard from the heavenly choir. The heavenly messenger promised Joseph that the child would save people from their sins.

On the one hand, the name is too ordinary. On the other hand, the story surrounding it has too many magic kingdom elements. It’s nice for children. It’s more of an embarrassment when talking with our erudite friends. When my childhood friend mocks the Christmas story, the best I can do is blush. Jesus said if we deny him before others, he will deny us before his Father.

Step 3: Final Diagnosis (Eternal Problem): Missing out on the Promise

Our secular landscape has been stripped of color; its contours flattened. All the Hallmark movies of the season bear our desire for promises kept. Without the promise and the Promised One we are destined for barren terrain, a land in which promises are made to be broken. 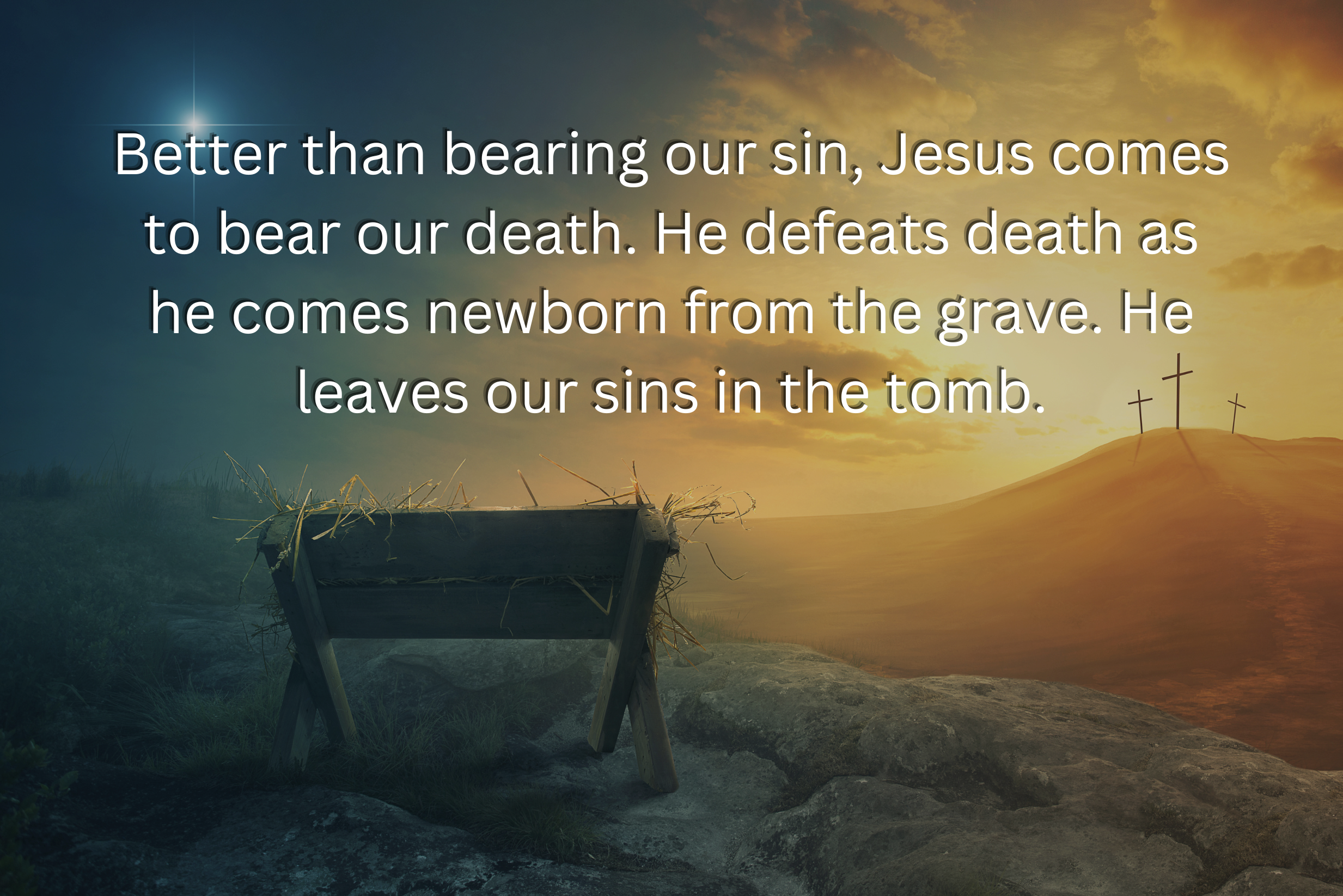 Born for us (from Canva)

This child’s name is not only theophoric, God bearing, he is God, born among us. That’s the promise fulfilled. God doubles down on the promise and the gift. The gift given at the first Christmas bears to us another promise. He will come again to fulfill what he started: a new creation. The new creation will not be ex nihilo, like the first. It will be ex vetere, out of what is old. The old barren landscape will be remade luxuriant.

One of the problems with a gift is we are inclined to discount the value of what is given us for free. We value more what we must work for and pay for. This gift may be free to us, but it comes at a high price. God the Father gives his Son to us to bear our sins, even our denial of him. It is as though all the mea culpas lodged under our names are transferred to him. When court is gaveled into session our ledger is clear; Jesus’ ledger is pages long. Better than bearing our sin, Jesus comes to bear our death. He defeats death as he comes newborn from the grave. He leaves our sins in the tomb.

Step 5: Advanced Prognosis (Internal Solution): Call on the Name of the Lord

Paul quotes Joel 2:32, “Everyone who calls on the name of the Lord shall be saved” (Romans 10:13). Paul addresses the church in Corinth as “those who are sanctified in “Christ Jesus, called to be saints, together with all those who in every place call on the name of our Lord Jesus Christ, both their Lord and ours” (1 Cor. 1:2).

On our behalf, parents, godparents, pastors, and congregation called on the name of the Lord when we were brought to the baptismal font. In baptism the Holy Spirit embedded our names in the Lord’s name. Our Christian name was called as we were baptized in the name of the Father, the Son, and the Holy Spirit. In baptism God names us. And with the name come promises. Fellow Text Study/Sabbatheology writer Chris Repp points us to the promises in the introduction to the baptism service in Evangelical Lutheran Worship (ELW).

The Holy Spirit brews faith in us, calling us by the gospel, enlightening us with his benefits, sanctifying, and keeping us in the faith. In God, named Father, Son, and Holy Spirit, we live, and move, and have our being (Acts 17:28).

Some suggest our prayer has no affect upon God. The affect is all on us. They say prayer draws us closer to God. Prayer realigns our priorities with God’s own. Certainly, prayer does these things. But does prayer have no impact on the outcome of the things for which we pray? I think it does have an impact. As we live in Christ, we are a part of the life lived between the Father and the Son in the Holy Spirit. Through Jesus, our voice is heard, and our petitions considered in the divine council. We pray also with the assurance that no matter the outcome God’s grace is sufficient for us.