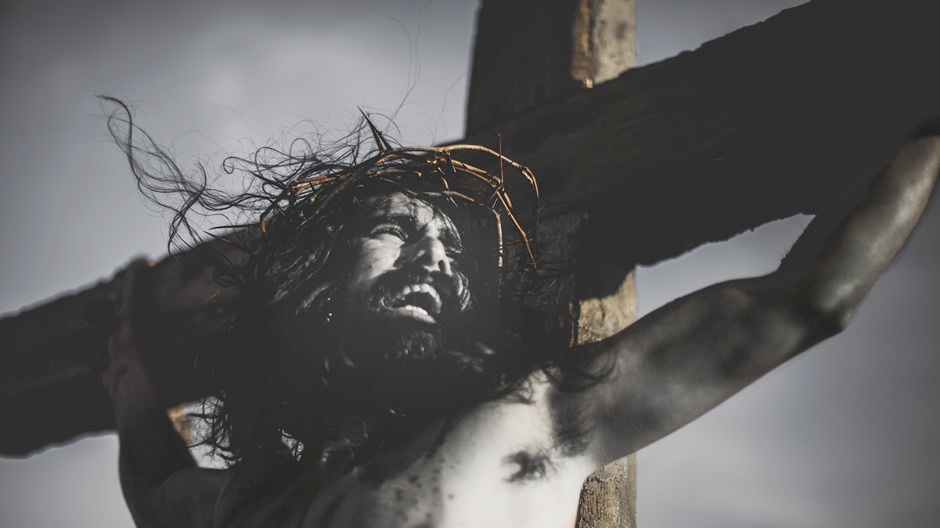 “When God is Silent.”

Those in the middle latitudes of the northern hemisphere—the majority of you, we imagine—are enduring the early winter miseries of long nights and raw, bitter days. These somehow heighten the contrast between our experience of the world as it currently is and the promises of the age to come that the texts of Advent are pouring into our ears right now.

It’s with this contrast in mind that we send you a sermon that was preached at the Crossings conference last January. It focused squarely on the conference theme, “When God is Silent,” and grappled with the discrepancy between everyday experience and the high expectations that God’s promises stir in us. The preacher was the Rev. Nathan Hall of the Lutheran Church of the Nativity in North Conway, New Hampshire. Of particular pertinence eleven months later is how Pr. Hall puts Christ crucified to work in addressing this conundrum. Look closely for that.

We should mention that Pr. Hall is both a member of the team that produces our weekly text studies and the most recent addition to the our Board of Directors. Thank God for that too.

by the Rev. Nathan Hall

33When it was noon, darkness came over the whole land until three in the afternoon. 34At three o’clock Jesus cried out with a loud voice, “Eloi, Eloi, lema sabachthani?” which means, “My God, my God, why have you forsaken me?” 35When some of the bystanders heard it, they said, “Listen, he is calling for Elijah.” 36And someone ran, filled a sponge with sour wine, put it on a stick, and gave it to him to drink, saying, “Wait, let us see whether Elijah will come to take him down.” 37Then Jesus gave a loud cry and breathed his last. 38And the curtain of the temple was torn in two, from top to bottom. 39Now when the centurion, who stood facing him, saw that in this way he breathed his last, he said, “Truly this man was God’s Son!”

Silence is hard to come by….

Perhaps silence is so hard to come by in part due to my career; my current church is full of people who keep wanting to talk to me for God knows what reason. Perhaps Silence is hard to come by because I am the father of a four year old and a two year old; the only way to find a quiet minute is to go to a conference all the way out in St. Louis where I get a full night’s uninterrupted sleep. My poor spouse….

But when I say that silence is so hard to come by, what I really mean is that I long for things to be quiet enough that I can hear.

I have excelled in recent years at bombarding my senses with voices. From the incessant blare of the car radio to the parasitic tenacity of social media. But with all the noise, where do we find quiet to hear the still small voice of God? That voice which can be heard in the quiet appears to be growing fainter all the time, at least for us westerners. We are no longer in tune to the spiritual vitality of our world. The breath of life no longer seems a mystery, pointing to divine inspiration. That ship sailed with the enlightenment, and has traveled further with each scientific advance.

But even in our churches, maybe especially so in my New England context, there is a diminishment. Gone are the glory days where we could expect a lively, committed, body of Christ for whom the weekly service was the highlight of the week. That ship has also sailed. People are just too busy. With it has gone the critical mass which once made the stories of scripture the story, off of which comedians, ethicists, writers, everybody would riff day in and day out. Drop a scriptural reference now and it either creates bewilderment or it goes unnoticed. Only in a gathering like this are you likely to get any traction. And through lack of practice, through cultural disengagement with what was once the story, the story of scripture, our minds are collectively untuned, unused, awkward. If we ever do get the moment of quiet, how could we hear God? 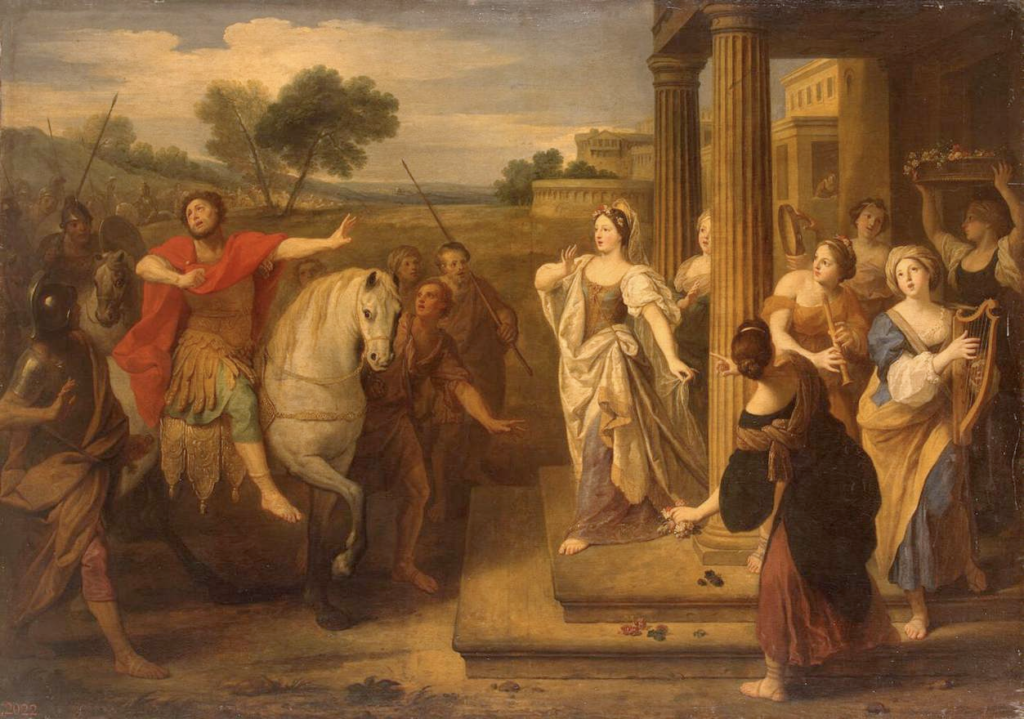 Perhaps we find ourselves in a world with so many different religious options that we cannot possible speak with the definitive voice saying that the God of the Hebrew Scriptures, who became incarnate the human, Jesus of Nazareth, is the true God. So from the plethora of religious options we have a world that is so open to everything that we just listen to everyone. Who are we supposed to listen to anyway?

“And now that you know all that,” would say God, “here is how you can live your best life now—”

—there once was an old couple. An aged wife and husband, who for years had longed to have a child. They tried and they tried, but with no luck. Yet they, unlike so many of us, were in regular communication with God. Time after time, God spoke and promised that the couple would have a child. And God promised that through that child there would be grand children, and great grandchildren as numerous as the stars. But time passed. The couple got older. Menopause set in. There was absolutely no possibility that they could have a child. Yet God did not keep silent. God kept promising and promising, and the impossible happened.

Then the God spoke again. God told the man to take this son, the promised child, to the top of a mountain and there sacrifice him. Astonishingly, disturbingly, the man begins to comply. He and the son climb the mountain. With great pathos the child asks, “Father, where is the lamb for a burnt offering?”

And suddenly an angel of the Lord speaks from a cloud and cancels the first order: “Do not lay your hand on the boy or do anything to him; for now I know that you fear God, since you have not withheld your son, your only son, from me.” There is a ram caught in a thicket, and the father offered it up as a burnt offering instead of the son.

This of course in the story of Abraham and Isaac.

And according to the NRSV, that story is wrapped up with this line: “it is said to this day, “On the mount of the LORD it shall be provided.” But the word translated as “provided” is really the passive form of the verb “to see.”

“On the mountain, the LORD will be revealed.” God will show up. 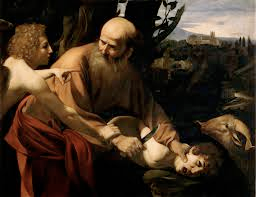 Why did God show up for Isaac and for Abraham, but not for Jephthah’s nameless daughter? Why did Isaac get a reprieve but this woman was murdered because of a rash, battle-giddy vow her father made to the Lord? Don’t you think the Lord could have at least sent an angel to say, do not raise your hand against your daughter? Look in the thicket. There is a ram. Sacrifice it instead. Isn’t that how the first born are to be redeemed? At least it’s how first-born males are redeemed. But perhaps even more troubling, why does this text seem to imply that Jephthah’s military victories were the direct result of God pleasure at this vow? I would rather God be silent and distant.

Maybe we westerners who have managed to deaden our perception to all spiritual voices are better off. Now if someone tried a stunt like the one Jephthah pulled, we would call it murder. If the person tried to say they had to do it because they made a promise to God, we would diagnose them with a psychiatric disorder, medicate them, and lock them away. But we are trying to hold two things together. On the one hand God is here. God is for you. God is acting on your behalf. On the other hand. God is silent.

Oddly enough—bizarrely enough—God’s answer is another death. This time, rather incomprehensibly, it is God that died.

One of my favorite authors, Dorothy Sayers, writes this in her book, Letters to a Diminished Church:

For whatever reason God chose to make humanity as it is—limited and suffering and subject to sorrows and death—God had the honesty and the courage to take his own medicine. Whatever game God is playing with creation, he has kept his own rules and played fair. God can exact nothing from humanity that he has not exacted from himself. God has gone through the whole of human experience, from the trivial irritations of family life and the cramping restrictions of hard work and lack of money to the worst horrors of pain and humiliation, defeat, despair, and death.1

And God in Christ, like Jephthah’s daughter, was left without a reprieve, even though he begged, “My Father, if it is possible, let this cup pass from me!” And from the cross he is abandoned as he cries. “My God, My God why have you forsaken me?”

It is rather astonishing that God would choose to sneak into the one place God cannot logically be. God managed to sneak into God-forsakenness.

God in Christ entered God-forsakenness. That is quite a paradox. Have you ever heard a more absurd notion? The powers of isolation and abandonment are rampant in the world, and God tricked them. The bible is full of tricksters: Samson, Jacob, Abraham. But God outdoes them all. By entering the hell of God-forsakenness, incognito. As a human.

But what good is that? To be really good news the gospel has to promise more than misery loving company. It is not enough to say that “everything is going to be ok, because at least God is suffering too.”

But the good news is in fact that God so loved the chaotic, wayward, forsaken world, that God could not leave it alone— but rather chose to save it. God’s saving work is not completed, but it will be. God promised a time where everything is set to rights. Even if right now we are living in the forsakenness of Holy Saturday.

For one thing, God has given us each other. When it gets really bad, and we cannot hold onto hope for ourselves, we can, as Luther wrote to Jonas Justus, hold on to belief and faith for each other. We can sit quietly with each other when silence is in season. We can sing with each other the singing is in season. And we can remind each other of the promise of Jesus’ resurrection—for you. We can speak that promise when we have been in the pits long enough to be dragged out of the dust.

God promises to help us on the way when we don’t even have the words we need. The Holy Spirit does not intercede with words. But with groans. Too deep for words, as St. Paul observes in Romans 8—

And when you come to take communion here tonight, remember that God is a trickster who has hidden God’s-self in, with, and under the bread and the wine so that God can pop out in the most unexpected places, be that when consuming such everyday food and drink, or when finding yourself at one of the crosses of life.

Silences happen. The world is in active rebellion against a God who would save it. Chaos is real. Estrangement is real. So may the Lord give us ears to hear. Mouths to taste and see. Eyes to perceive. And Friends who will hold Christ for us and before us. And may we be a blessing to others as we do the same.