Several months ago the History Channel had a show on Roman crucifixion. It explained all the nitty gritty details of crucifixion, especially its brutality and its ability to put the human body through incredible levels of pain and suffering. The Romans also used it as a very effective tool of state sponsored psychological terrorism. Dare to challenge Roman rule . . . . and you paid for it dearly.

One of the most vivid accounts of Roman crucifixion described what was done to the slave revolt led by Sparticus against the empire in 71 AD. After some initial success the revolt was brutally crushed. As a show of Roman power and a threat against anyone else to would dare to disobey, the empire crucified 6000 slaves along a 120 mile road leading into Rome. The bodies weren’t even removed after the victims died. They were left to rot and be scavenged by animals . . . for all to see . . . and be terrified.

After viewing this program the crucifixion of Jesus seemed surreal. It is difficult to believe that anyone, let alone the very Son of God, had to endure such brutality and pain. As you read the accounts of Jesus’ suffering in Matthew, Mark and Luke, the suffering and pain are clear. Jesus’ cry of dereliction, “My God, my God, why have you forsaken me,” clearly reflects the anguish and pain of Roman crucifixion.

And then we come to the Gospel of John. His portrayal of Jesus’ suffering is very different from the other Gospels. In John there are no cries of despair. Instead John presents Jesus on the cross as his finest “hour,” his moment of “glory.” Even his cry of thirst is not so much about a parched tongue or cracked lips . . . but the fulfillment of Scripture and the completion of God’s plan to save the world.

That message, filled with paradox and irony, is portrayed here in this painting, as only the great Salvadore Dali could do it. Entitled “Crucifixion (Corpus Hypercubus)” it reflects Dali’s deep Christian faith and his fascination with science and mathematics. Jesus is on the cross . . . but is he? He is fixed to the cross . . . but not fixed, almost seeming to levitate over the cross, projecting himself upward and outward. This is an act of defiance if not victory. Even the cross, this brutal tool of state sponsored terrorism cannot contain him.

But notice the cross . . . its perfect cubism, its geometric symmetry, its clean efficiency. Dali knows that in our world of terrorism . . . sin and evil are often far too clever to force their brutality directly upon us. The forces of sin and evil in our modern and even post-modern worlds are expressed more subtlety in the cold efficiencies of mechanized, sanitized and technologically dehumanized systems that in their presumptuous messianism proclaim a gospel of lies, distortion and death.

But even in this kind of world, God’s love cannot be thwarted. God so loved the world that He gave his only Son . . . to carry our sin, to suffer our plight, to endure our fate, and to bear His own judgment on this sin-sick world . . . and to suffer the consequences, . . . even death on a cross . . . for us and our salvation.

That is why that darkest of all days, that Friday long ago when the very Son of God was tortured and executed with brutal Roman efficiency at the “place of the skull,” . . . is the best of all days. It is a good day. It is a good Friday, THE Good Friday, because . . . as Dali so vividly portrays . . . God’s love rises above the gravitational pull of all that would drag down and swallow up all that is good. God’s love on that blessed and holy cross . . . rises buoyantly, triumphantly. Christ, lifted up and crucified, the ultimate expression of Divine Love, . . . draws the whole universe into His loving arms. 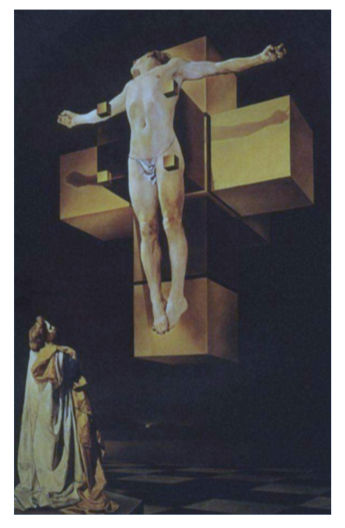