20Now among those who went up to worship at the festival were some Greeks. 21They came to Philip, who was from Bethsaida in Galilee, and said to him, “Sir, we wish to see Jesus.” 22Philip went and told Andrew; then Andrew and Philip went and told Jesus. 23Jesus answered them, “The hour has come for the Son of Man to be glorified. 24Very truly, I tell you, unless a grain of wheat falls into the earth and dies, it remains just a single grain; but if it dies, it bears much fruit. 25Those who love their life lose it, and those who hate their life in this world will keep it for eternal life. 26Whoever serves me must follow me, and where I am, there will my servant be also. Whoever serves me, the Father will honor.

27Now my soul is troubled. And what should I say — ‘Father, save me from this hour’? No, it is for this reason that I have come to this hour. 28Father, glorify your name.” Then a voice came from heaven, “I have glorified it, and I will glorify it again.” 29The crowd standing there heard it and said that it was thunder. Others said, “An angel has spoken to him.” 30Jesus answered, “This voice has come for your sake, not for mine. 31Now is the judgment of this world; now the ruler of this world will be driven out. 32And I, when I am lifted up from the earth, will draw all people to myself.” 33He said this to indicate the kind of death he was to die.

Last week at our staff calendar meeting, I informed our secretary that I would be missing today’s meeting, as I would be here, attending, as I said with a rather self-important air of worldly sophistication, “The 3rd International Conference of the Crossings Community.” “Really!” she said, duly impressed…until I told her I was driving to St. Louis. I felt a little like Dan Erlander, who when introduced at Holden Village as an international speaker, admitted he had once given a few lectures in Canada…

All of us gather here this morning, however….all of us – whether from a couple of hours away or a couple of continents away – all of us gather here because by definition, any community that sees itself as gathering under the cross, by definition, is international. What did Jesus tell those Greeks who came seeking to see him? (By the way, in earshot of Phillip and Andrew and all the other insiders?) He said to that “First” International Conference of the Crossings Community, that lifted up (and John underscores less we miss it, lifted up on the cross), he would indeed draw all people to himself. By definition, the cross community is international.

I don’t know about you, but that reminder diagnoses an all-too-easy national parochialism that defines, at least, me and my community on the southside of Indianapolis, the “heartland” of America, where a neighboring church hosts a wildly popular annual “God and Country Festival” on the weekend of the 4th of July, complete with – and I kid you not – a military fly-over as the climax of the outdoor worship service….

So, I come to the 3rd (or is it then the 4th?) International Conference of the Crossings Community, and I remember an early morning in Michigan City, early as well in my ministry, giving a tour of our school and church to a visiting evangelist from South Africa, who stopped dead in his tracks in the center aisle of St. Paul Lutheran Church, the coal-black color of his face almost draining away, as he pointed incredulously at the American flag in our chancel, and asked me why it was there, so close to the altar…. He could not understand this. Was not the Son of Man lifted up to draw all people to himself???

It was later, I think, that I came upon “I Am An African” written by South African poet Gabriel Setiloane. In this epic confessional poem, asked what an African believes, Setiloane first reaffirms the faith of his forefathers who knew God under different names, such as Uvelingqaki or Unkulunkulu. This leads to a further question:

“Tell us further, you African: what of Jesus, the Christ,
Born in Bethlehem: Son of Man and Son of God
Do you believe in him?”

And the answer in Setiloane’s poem is:

“For ages He eluded us, this Jesus of Bethlehem, Son of Man;
Going first to Asia and to Europe, and the western sphere . . . .

“Later on, He came, this Son of man;
Like a child delayed He came to us.
The White Man brought Him.
He was pale, and not the Sunburnt Son of the Desert.
As a child He came.

“A wee little babe wrapped in swaddling clothes.
Ah, if only He had been like little Moses,
lying Sun-scorched on the banks of the River of God
We would have recognized Him.
He eludes us still, this Jesus, Son of Man.
His words: Ah, they taste so good
as sweet and refreshing as the sap of the palm raised and nourished on African soil,
The Truths of his words are for all men, for all time.

“And yet for us it is when He is on the cross,
This Jesus of Nazareth, with holed hands
and open side, like a beast at a sacrifice;
When He is stripped naked like us,
Browned and sweating water and blood in the heat of the sun,
Yet silent,
That we cannot resist Him.

“How like us He is, this Jesus of Nazareth,
Beaten, tortured, imprisoned, spat upon, truncheoned,
Denied by His own, and chased like a thief in the night,
Despised , and rejected like a dog that has fleas,
for NO REASON.

“No reason, but that He was Son of his Father,
OR . . . Was there a reason?
There was indeed . . .
As in that sheep or goat we offer in sacrifice,
Quiet and uncomplaining.
Its blood falling to the ground to cleanse it, as us:
And making peace between us and our fathers long passed away.
He is that LAMB!
His blood cleanses,
not only us,
not only the clan,
not only the tribe,
But all, all MANKIND:
Black and White and Brown and Red,
All Mankind!

“HO! . . . Jesus, Lord, Son of Man and Son of God,
Make peace with your blood and sweat and suffering,
With God, UVELINGQAKI, UNKULUNKULU,
For the sins of Mankind, our fathers and us,
That standing in the same Sonship with all mankind and you,
Together with you, we can pray to Him above:
FATHER FORGIVE.”

What is it about the cross, that makes it so hard to resist being drawn to this Jesus, and I mean this Jesus, not the powerful and glorious one I invoke to bless my country, defend my church, sanction my life, ease my parochial concerns, but the one who says my Indiana grain of wheat/corn must first die, for fruit to be born, who bids me to hate my life in this world, who confronts me with the hard truth that me and my world and my country are not “#1”, and as I continue to insist and live as if it were so, there is a death sentence in that which does not lead to any kind of lasting, abundant, let alone eternal life…..

What is it about the cross, that makes it so hard to resist being drawn to this Jesus, this Jesus who invites me and people of every nation, tribe and culture to consider the transformational promise that the hour of his glory is when he looks like a loser, lifted high on a cross……?

Setiloane and John would suggest it is because there, on the cross, where God appears “just like us.” It is there on the cross where God meets us where we are most profoundly human, both victims and perpetrators of sin, brokenness and death. The cultural diagnostic details of our particular problems may differ, but ultimately we are all nailed there, nailed there in God-forsaken pain and judgement….

And we cannot resist him, this Jesus, for he alone makes us one, and he alone takes our dead grains and makes of us a living loaf, a forgiven and free “Bread for the World”, a truly International Conference of the Crossings Community. INI 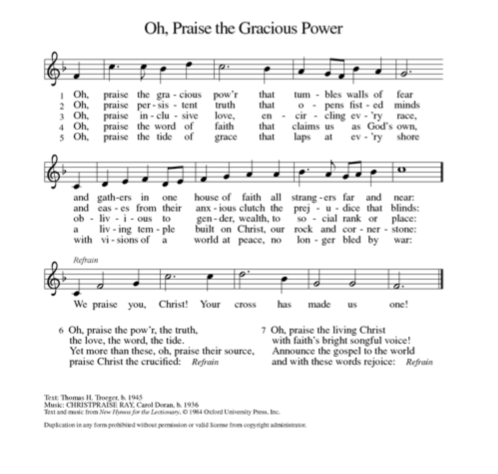