Churches across the U.S. are closed this month. Many have found ways to deliver fresh proclamations of the Gospel through livestream broadcasts. Others have not. Most if not all congregations will have people in regular attendance or more loosely on the rolls who don’t use computers, smart phones or other devices that connect them to the internet. They surely find the silence deafening by now.

Perhaps you know such a person. If so, show them some kindness for the Lord’s sake. Today’s post is a reflection on the heart of Matthew’s passion by Steven Kuhl. Next week we’ll send you an Easter sermon by Steve Albertin. We suggest that you print both of these and mail them to your disconnected friend(s). Yes, of course include a personal note. They’ll be thirsty for such things.

Meanwhile, peruse these offerings yourself. Share them with the dear ones you’re penned up with these days. They’ll feed you too, God grant.

One other suggestion: we hear that Volume 43 of Luther’s Works is being dusted off and cracked open across the land right now. It contains a pamphlet Luther published in 1527 entitled “Whether One May Flee from a Deadly Plague.” We urge you to read it as background to our next essay about the covid-19 pandemic. We hope to get that to you in the Second Week of Easter.

Who’s on Trial Here? A Study of Matthew’s Passion

The text is an excerpt from the trial and execution of Jesus. The trial dimension of the story is central and larger than we might think. Ironically, not only is Jesus on trial here, but so is the whole world—on trial before God, that is. For everyone will be judged by the judgment they make of Jesus. The issue is not whether he is guilty as charged—for Matthew, that is a complicated question, as we will see—but whether or not he is the Son of God, and that what he is doing has God’s stamp of approval. Therefore, the apex of the crucifixion episode is the joint “testimony” of the centurion and his troop of soldiers (27:54)—a testimony elicited not by faith, but fear, which can be turned to faith. More on that later.

Just prior to our text, the religious establishment has condemned Jesus for blasphemy since he did not deny that he was “the Messiah, the Son of God” (26:63f.) Of course, if it turns out that he is the Messiah, then the shoe is on the other foot; they will be the blasphemers. Such is the high stakes nature of the trial. Since the religious authorities are not allowed to carry out the prescribed punishment for blasphemy, death, they naturally send Jesus to Pilate, the key figure in the political establishment, who can impose that punishment. And that’s where our text begins. 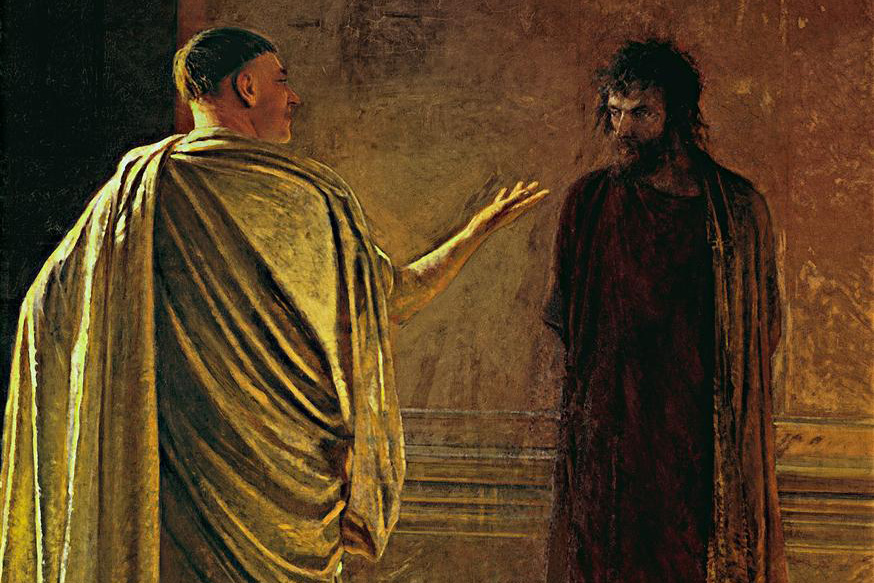 Again, Jesus arrives before Pilate already condemned for claiming to be the Messiah, the Son of God. This is the major charge against him (26:63-68, 27:40-43). But that verdict has a political as well as a religious dimension. Caesar claimed to be “Son of God,” and Rome executes self-proclaimed messiahs as enemies of the state. Therein lies the problem for Pilate. There is no evidence that Jesus is leading a political revolution (Jesus Seminar, take note), or that he thinks about the idea of “Messiah” the way the Zealots do or the Maccabees had. Indeed, Jesus thinks of “Messiahship” and “kingship” in radically different terms than Pilate does. For him it is not a matter of grabbing the reins of law or civil justice that Rome presently hold in Palestine through its principal agent, Pilate. His goal rather is to take hold of the reins of mercy. Matthew calls this “the good news of the Kingdom” (4:23), for which Jesus is God’s principal agent.

To highlight this contrast, Matthew presents the often ruthless, expedient, and corrupt Roman establishment, with Pilate as its face, at its self-acclaimed ideological best as the defender of justice under the law. The Gospel by contrast is not the law at its civil best, punishing lawbreakers and defending the innocent, but the good news of God’s mercy for sinners, those for whom the law at its best spells doom. In his capacity as the defender of justice, Pilate sees through the Jewish establishment as disingenuous; they are “jealous” (27:18) of Jesus’ religious popularity among the people (v. 17). But Pilate also has other concerns. First, he is charged with maintaining public order and does not want a riot on his hands over this Jesus character (27:24). Second, his wife has premonitions that Jesus is “innocent” and begs him to “have nothing to do with this man” (27:19).

But Pilate can’t yield to her pleading. As the established civil authority, he must render judgment. To be sure, he tries to dodge this bullet through a legal loophole: giving the people the option of releasing either Jesus Barabbas (a notorious insurrectionist, whose name, ironically, means “Son of the Father”) or Jesus the Messiah (known as one who “saved others” (v. 42), and accused of blasphemy for claiming to be the Son of God). Nor is Jesus himself of any help to Pilate. For when Pilate asks, he doesn’t deny the charge that he is “the king of the Jews.” Even for Pilate there is no getting around having to make a judgment about Jesus. And don’t think that Pilate’s pronouncement of his own innocence exonerates him (27:24). It doesn’t. And don’t think that the cry of the crowd, “his blood be on us and our children” (v. 24), gives him an out. It doesn’t. Try as he may to pass the buck, the truth is, the buck stops with him. But not only with him, but with every one of us.

So, when all is said and done, Jesus is condemned for his claim to be the Messiah, the Son of God, the King of the Jews. And now the stage is set for him to face the consequences due for this: the death sentence, crucifixion. But even while he hangs on the cross, the larger trial goes on. There seems to be no satisfaction gained from what has just happened, even though the whole world, religious and political, has gotten its way. For those who carry out the sentence are driven to taunt and mock him, challenging him to prove his claims. So do the criminals who are crucified with him. So does every passerby (v. 39). I take that to include even those of us who “pass by” through reading this story. No one is exempt from having to pass judgment on Jesus. Either he is the Messiah, the Son of God, or a liar and blasphemer. And the stakes couldn’t be higher. For the judgment with which we judge him determines the judgment with which we are judged. (See 7:2.)

The tension mounts as darkness fills the land from noon to three in the afternoon. Then, at three o’clock, the most decisive question of the whole trial is asked—and asked by none other than Jesus himself: “My God, my God, why have you forsaken me?” (27:46). Could that be true? Is Jesus God-forsaken? Everyone standing around the cross seems to be interested in an answer. Will this be the moment of dramatic rescue? Will Elijah come and save him? But no definitive answer is forthcoming—yet.  Of course, if they—were we—to remember and believe how the psalm Jesus quotes (Ps. 22) ends, they would have their answer. Indeed, if they but believed what Jesus has said earlier, they would have their answer (see 16:21, 17:22-23, 20:18-19, and especially 26:31-32.) But that would take believing that Jesus is the Messiah, the Son of God, the one about whom the Psalm was written; and as of yet, no one has figured this out, even though it is key to understanding what God is doing for them in this moment.

Finally comes the end—or what looks like it. Jesus cries again with a loud voice and breathes his last. Jesus is dead (27:50). But wait. All of a sudden, strange events take place. Apocalyptic-like events. The curtain in the temple is torn in two (a sign that the divide between God and humanity is gone), the earth is shaken and rocks are split (a sign that the earth will release the dead) and the bodies of the saints that had fallen asleep are raised and appear to many (a sign that the good news will be proclaimed throughout the world). “Apocalypse,” in the teaching of Jesus, means the “unveiling” or the proclamation of the good news of salvation to all people. Not only does Jesus teach this explicitly when his disciples ask him about apocalyptic matters (cf. 24:14), but he puts it into action decisively when he commissions his disciples before his ascension (28:16-20). 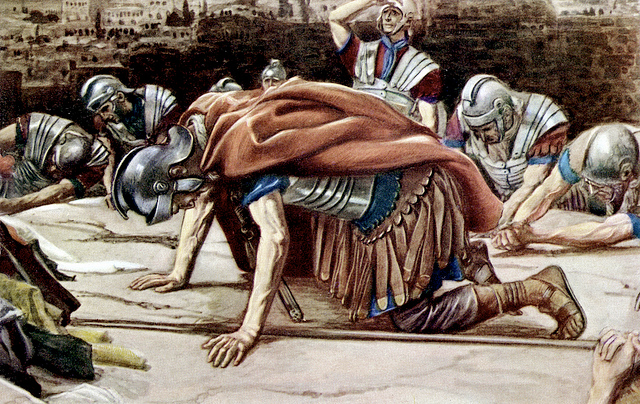 But the most amazing sign that a new world is emerging is seen in what happens next. The centurion and his execution team have second thoughts about the man on the cross: “Truly this man was [and continues to be] God’s Son!” they conclude. (The Greek word which the NRSV translates “was” is the imperfect form of the verb “to be” and connotes past and continuing identity.) Significantly, Matthew tells us that this confession emerges from “terror” (27:54). It is, in other words, a confession of guilt. In short, what has been “unveiled” to them in this apocalyptic moment is that they have been on the wrong side of history where Jesus is concerned.

Still, with regard to Jesus, this kind of fear is not without hope. For it can be transformed into what Matthew calls repentance. How? By the proclamation of the forgiveness of sins in Jesus’ name. Forgiveness is the very thing Jesus came into the world to do, the very thing for which Jesus has been condemned as a blasphemer, but the very thing that God will vindicate by raising him from the dead. After the resurrection, this Crucified One will return, by his Father’s approval, to those who are on the wrong side of history and invite them to cross over into the promise of his resurrection, into his new history, marked by the forgiveness of sins and the testimony born out of repentance and faith: “Truly this man was and continues to be the Son of God.”