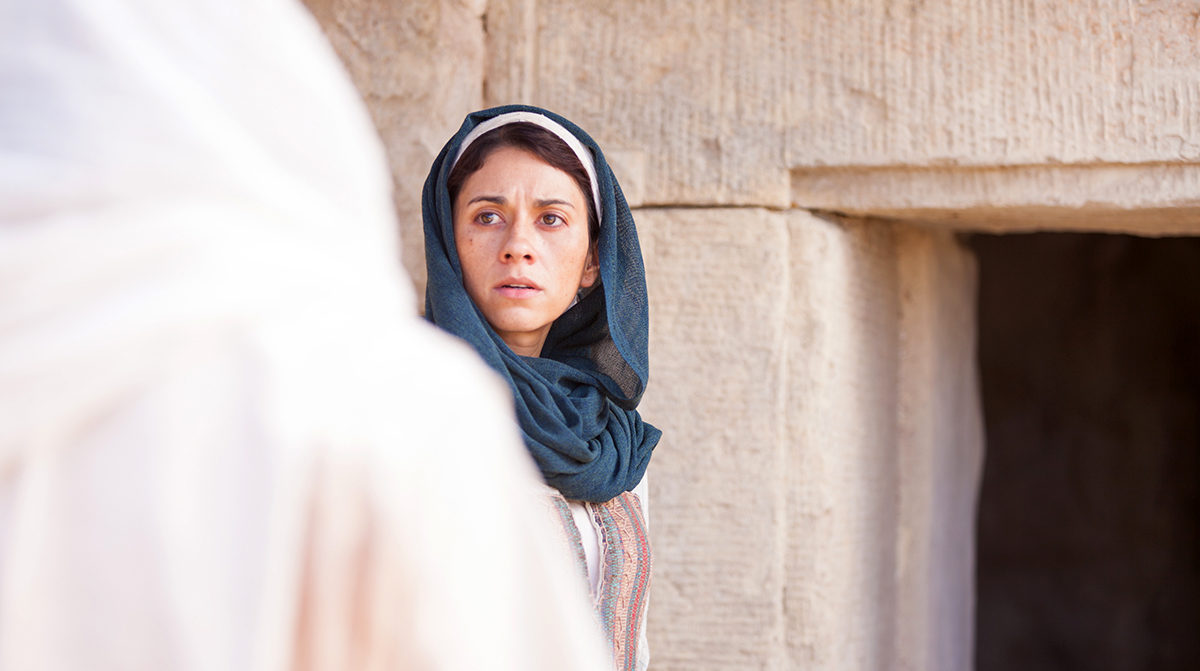 Our gift for this first week of Easter is a gem of insight from Steve Kuhl into St. John’s account of Easter morning. It offers a splendid starting point for further listening, thinking, and praying as we grapple in coming Easter weeks with our daily vocation as witnesses to the resurrection of our Lord Jesus Christ. We suspect you’ll be putting it to good use already next Sunday, when we meet up with Thomas.

Faith as Evidence of the Resurrection: A Theme in St. John’s Easter Account 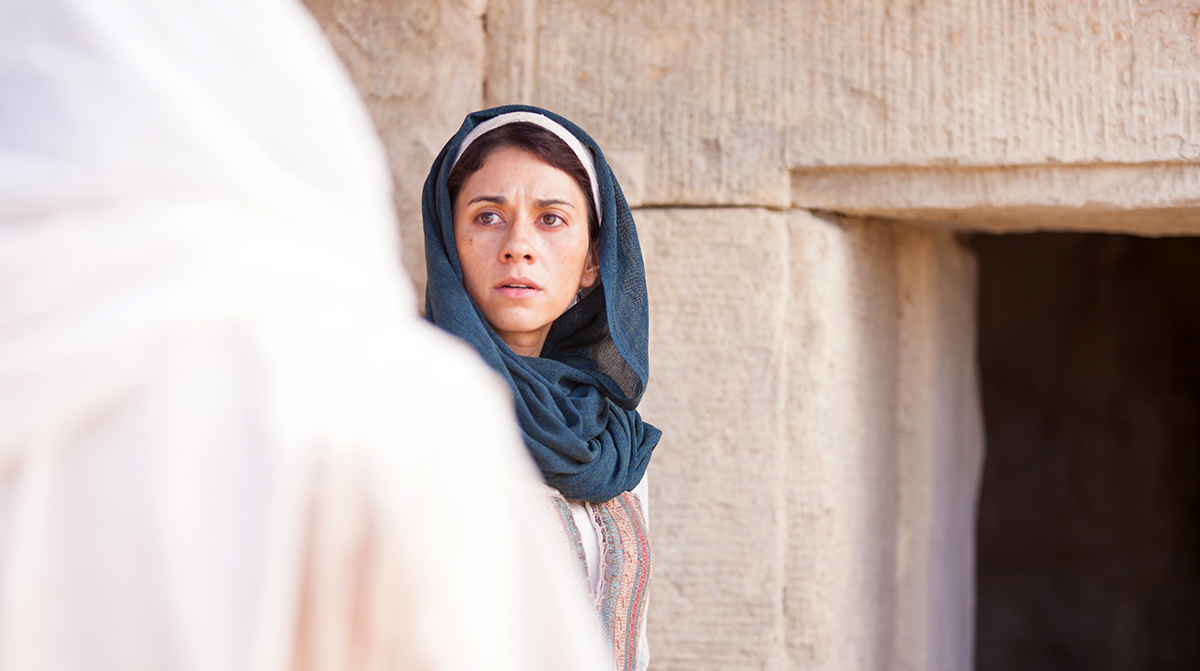 Like the other Gospel writers, St. John does not give us a simple journalistic report of what happened on Easter morning (John 20:1-18). Instead he shapes his account to address questions and issues that were important in his own time and for his beloved community. Like a symphony, his account has both major and minor themes intertwined and running through it.

In all four Gospels, women are the first to go to the tomb on Easter morning. That seems to be a fact. But unlike the three synoptic accounts, where two or more women are mentioned, John speaks only of Mary Magdalene. That’s because Mary’s rise to faith is an important part of the resurrection story. Significantly, Mary is only mentioned one other time by John. There she is standing near the cross with Jesus’ mother, his Aunt Mary (wife of Clopas), and the Beloved Disciple (19:25). She is an eyewitness to his death.

John begins with Mary coming to the tomb while it is dark (v. 1). In John, light and dark are not only optical phenomenon, but also indicators of a state of mind, so to speak, as when we say we are in the dark about something, lacking in understanding. (See also Nicodemus, who came to Jesus “by night,” 3:2.) Here, Mary’s state of mind was consumed by grief over what she saw on Friday: the fact that Jesus was dead (cf. 11). That he is “the resurrection and life,” as he said he was (cf. 11:25, 14:18-9), was completely out of mind or, more accurately, not yet believed. Therefore, when she saw that the stone was rolled away, she did the expected: she ran to Peter (whom John’s hearers know to be the lead figure among the disciples) to tell him that the body had been taken and she doesn’t know where it has been now laid. At this point in the story, Mary is an example of despair, not faith.

This sets the stage for John’s further exploration of the “resurrection of faith in the resurrection of Jesus.” This he does by setting up a race to the tomb between Peter and “another disciple” who is the Beloved Disciple (20:4), that inconspicuous model disciple who stands in the background of John’s Gospel. Significantly, the only “evidence” we have of the resurrection so far is the “empty tomb” itself. But with John, such physical evidence is always more than just physical evidence. It is also a “sign” of something greater, the way, for example, the turning of water into wine (2:11) or the giving of sight to the man born blind (9:1-41) or the raising of Lazarus (11:1-44) were all “signs” of something greater. The problem is not for want of evidence, “signs,” the problem is for want of “insight,” which is impossible without faith.

Although the Beloved Disciple arrives at the tomb first, he stops short of even looking in. But when Peter arrives, he does; and, to be sure, it is empty. But as Peter looks in John tells us he sees even more “evidence.” He saw the linen wrappings lying there and the face cloth wrapped up neatly. Remember how Jesus had to order the unbinding of Lazarus from the burial linens (11:44)? Not here. As David Kysar notes (John: Augsburg Commentary on the New Testament, p. 297), this evidence says 1) that the body was not hastily removed and 2) that John thinks of the resurrection as an event in which the body is so transformed that he passed through the burial linens without disturbing them the way, for example, the resurrected Jesus will later pass through locked doors (20:19).

But central here for John is the contrast between Peter and the Beloved Disciple. Difference number one is this: The Beloved Disciple, unlike Peter, went into the tomb, saw the same “evidence” that Peter saw, and “believed” (vs. 8)! No such faith is ascribed yet to Peter. To use Kysar’s characterization of the three persons who went to the tomb on Easter Sunday: Mary viewed the evidence as tragic, Peter as uncertain, and the Believed Disciple with faith. But more, the Beloved Disciple is the model of Easter faith for the reader: He “believes-without-seeing” in the resurrected Lord; and to believe in the Resurrected One is to have the power of his resurrection in your life: forgiveness, belonging, and eternal life. This Jesus spoke about both in the upper room and in his post-resurrection appearances.

Still, John has no intention to disparage either Mary or Peter. Rather, he wants to incorporate their movement from despair and uncertainty to faith as part of the evidence of the resurrection for us, his readers. And that’s what happens next. After Peter and the Beloved Disciple depart from the tomb, Mary remains there in her grief (20:11). For whatever reason, she too now looks into the tomb and, behold, two angels are there. Their function is minimal. They simply inquire into her grief. They don’t even tell her that “Jesus is risen,” as in the Synoptics. Instead, Mary turns around and sees Jesus. But even then, she does not recognize him. She is so darkened by her grief and unbelief that she thinks he is the gardener, hoping he might know where the body is laid. She is so held captive by the power of death that she cannot imagine the power of Jesus’ resurrection.

Only when Jesus calls Mary by name is her grief lifted and her first impulse is to grab onto Jesus for dear life. But Jesus stops her. Here John is giving us a complex lesson about the nature of Easter faith for Mary and those who knew Jesus before his death and resurrection. Mary’s attempt to grab Jesus was more than an act of affection. It was a sign of her desire to recapture the good old days before Jesus died and rose. But resurrection is not about going back or recapturing the past. The past must die. Resurrection is about moving forward to something different, new and better. For Jesus, then, resurrection necessarily means his ascension or return or departure back to his God and Father. Mary still needed to “grasp” that. 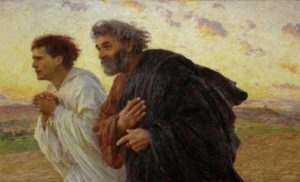 This return is necessary because it is the way Jesus completes the circuit of our salvation or, as he said in the upper room, “prepares a place for us in his Father’s house” (14:2-3). Through the whole circuit of his incarnation, death, resurrection and ascension Jesus makes it possible for his God and Father to become our God and Father, that is, for us to become children of God (1:12). True, in completing the circuit, he will no longer be directly accessible to them—or us— through the senses as he once was. But he will be accessible in a new and better way: everywhere and always through the Spirit who makes the resurrection of faith in the resurrection of Jesus possible.

How do we know this? Because, by the power of the Spirit, believers will proclaim the good news of the resurrection of Jesus Christ, always and everywhere, making new believers. When did this all begin? On that first Easter with Mary when Jesus told her to go and tell his “brothers” (presumably the eleven apostles, all men) all that Jesus had just told her. She did it! And ever since, the Spirit and disciples have been in cahoots making new believers by proclaiming the good news of Resurrected Jesus—and normatively without the necessity of seeing the risen Lord first. Although Mary’s and Peter’s way of coming to faith is not the norm of “believing-without-seeing” that characterized the Beloved Disciple or us, aren’t you glad that God—Father, +Son, and Holy Spirit— has made it part of the evidence of the resurrection? Even so, in your delight over their “believing-with-seeing,” don’t overlook the fact that your own “believing-without-seeing” is also, in its own right, evidence of the resurrection too.