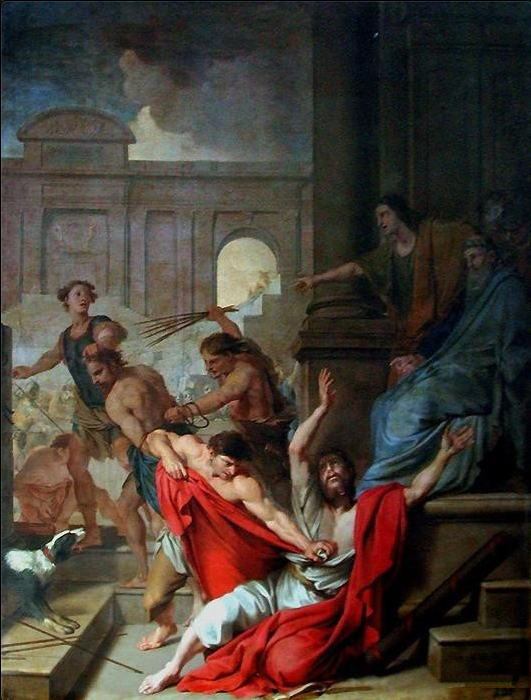 16One day, as we were going to the place of prayer, we met a slave-girl who had a spirit of divination and brought her owners a great deal of money by fortune-telling. 17While she followed Paul and us, she would cry out, “These men are slaves of the Most High God, who proclaim to you a way of salvation.” 18She kept doing this for many days. But Paul, very much annoyed, turned and said to the spirit, “I order you in the name of Jesus Christ to come out of her.” And it came out that very hour.

19 But when her owners saw that their hope of making money was gone, they seized Paul and Silas and dragged them into the marketplace before the authorities. 20When they had brought them before the magistrates, they said, “These men are disturbing our city; they are Jews 21and are advocating customs that are not lawful for us as Romans to adopt or observe.” 22The crowd joined in attacking them, and the magistrates had them stripped of their clothing and ordered them to be beaten with rods. 23After they had given them a severe flogging, they threw them into prison and ordered the jailer to keep them securely. 24Following these instructions, he put them in the innermost cell and fastened their feet in the stocks.

25About midnight Paul and Silas were praying and singing hymns to God, and the prisoners were listening to them. 26Suddenly there was an earthquake, so violent that the foundations of the prison were shaken; and immediately all the doors were opened and everyone’s chains were unfastened. 27When the jailer woke up and saw the prison doors wide open, he drew his sword and was about to kill himself, since he supposed that the prisoners had escaped. 28But Paul shouted in a loud voice, “Do not harm yourself, for we are all here.” 29The jailer called for lights, and rushing in, he fell down trembling before Paul and Silas. 30Then he brought them outside and said, “Sirs, what must I do to be saved?” 31They answered, “Believe on the Lord Jesus, and you will be saved, you and your household.” 32They spoke the word of the Lord to him and to all who were in his house. 33At the same hour of the night he took them and washed their wounds; then he and his entire family were baptized without delay. 34He brought them up into the house and set food before them; and he and his entire household rejoiced that he had become a believer in God.

Author’s Note: Life without faith in Christ is a life without trust in God’s unconditional love for us. Though it might seem we are free from the shackles of “religion,” in actuality, we are prisoners to “the law.” Without trust in God’s love for us, we’re always striving to earn our worthiness from others, from our egos, and from the seemingly wrathful God we’ve decided to ignore or flee from. This is a life of bondage because we can never live up to the laws or demands of others, our egos, or a tyrannical God. However, when we have trust in God’s love for us through Christ, we are free from earning our worth. And even if we’re shackled and behind bars, we are free as free can be, singing God’s praise, as Paul and Silas were as they served time for breaking arbitrary human laws.

In Christ’s resurrection, we are given new life and restored to God’s shalom. This is the God who Paul met on the road to Damascus, and it is the God who showed him true freedom even as he sat imprisoned in the depths of the dungeon.

Step 1: Initial Diagnosis (External Problem): Under the Boot of the Law

The jailer symbolizes all of us who attempt to live life by the law. He’s not a bad guy. He does his job well. But, as we see in verse 27, he’s spiritually imprisoned under the law (both the laws on the books and the demands in his own mind). He thinks he can actually meet the law’s demands. He bases his worth on his performance. When the earthquake hits and his prisoners are free to escape, his self-salvation project literally blows up in his face. He sees that he’s fallen short of the law and he sees no other option but to die. You and I do operate this way too. We’re chained to our own numerous self-fulfilled salvation projects that always fall short (be they political rightness, wealth, consumerism, optimized health, parental prowess, etc.). We can never justify our own existence and so find ourselves imprisoned to a life sentence under the boot of the law.

When we try to live life by the law, we go through life as spiritual prisoners. Though we may not literally be behind bars, we carry around an “inner jailer” or “accuser” (aka Satan) who constantly reminds us that we have way further to go. Those carrots are dangled in front of us no matter how hard we strive and no matter what we accomplish. We might feel short bursts of accomplishment, but they don’t last long. And when things blow up, we’re brought to our knees; sometimes we even want to cease existing. This is the anfechtungen (spiritual suffering) that Martin Luther wrote about that tortured him when he was a monk. Only the Gospel can free us from this imprisonment.

When we don’t have Christ’s Word and Sacraments of unconditional love (yes, even when we’re at our lowest) we live under a God of wrath. God is not one whom we can trust. Rather, God is someone we need to run like hell from. God is an abstract booming figure in the sky who only seeks to punish us. We might be able to squelch that voice when we’re living our #bestlives, but when things come crashing down, which they inevitably do, we feel like we’re in hell and that God has put us there. 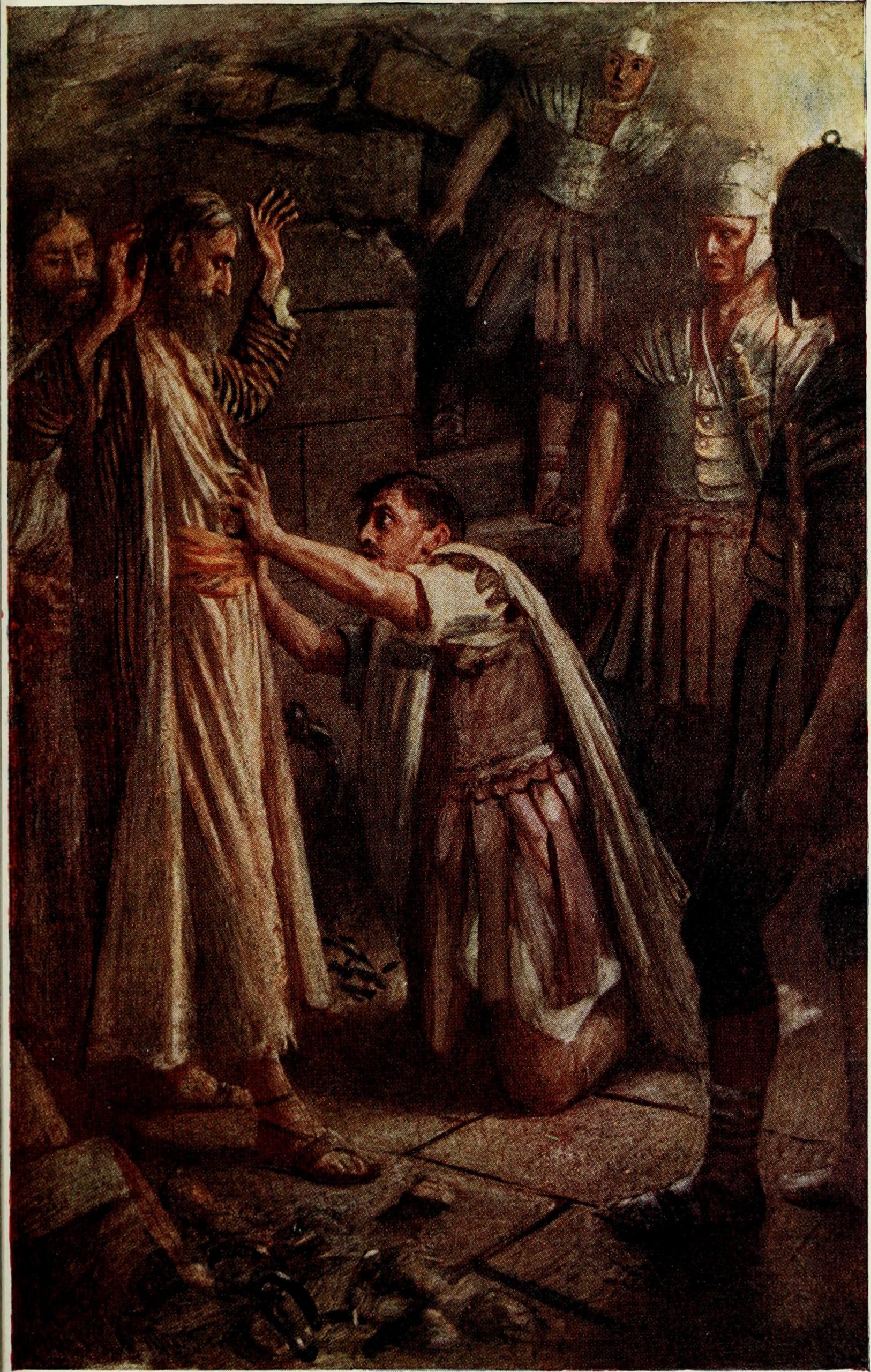 St. Paul and the Jailer, from a religious tract (1909) found on Wikipedia

Step 4: Initial Prognosis (Eternal Solution): Rightness and Worth for Free

God’s love is given, not earned. The law cannot cause what it demands. Only God’s one-way love can. This is what God shows us by taking on flesh in Jesus. God comes to give us (and even those we most despise) rightness and worth for free. The problem is, we respond by killing him. Still God refuses to stay dead. So, in Christ’s death, God creates a solution: we also die. And in Christ’s resurrection, we are given new life and restored to God’s shalom. This is the God who Paul met on the road to Damascus, and it is the God who showed him true freedom even as he sat imprisoned in the depths of the dungeon (v. 24).

When we receive God’s unconditional love, not because of what we’ve done (or haven’t done) but because of who God is, we can’t help but live in God’s shalom. No longer do we begrudgingly follow arbitrary laws from our society, or out of fear of a wrathful God. The flow of God’s unearned love washes over and through us, and into the lives of others.

The slave-girl rightly recognized the power at work in Paul and his band of merry Christians (v. 16).  Freed by God’s love for us in Christ, we become “slaves of the Most High God who proclaim a way of salvation.” But unlike being a slave to the law, being a slave of Christ sets us free. We are liberated from the drummed-up demands of self and others. Freed in Christ, we can sing praises late into the night as we sit shackled to the demands of this world. And maybe, just maybe, the other prisoners will listen (v. 25).