Luke 16:1-13
Fourteenth Sunday after Pentecost
Analysis by Lori A. Cornell

1Then Jesus said to the disciples, “There was a rich man who had a manager, and charges were brought to him that this man was squandering his property. 2So he summoned him and said to him, ‘What is this that I hear about you? Give me an accounting of your management, because you cannot be my manager any longer.’ 3Then the manager said to himself, ‘What will I do, now that my master is taking the position away from me? I am not strong enough to dig, and I am ashamed to beg. 4I have decided what to do so that, when I am dismissed as manager, people may welcome me into their homes.’ 5So, summoning his master’s debtors one by one, he asked the first, ‘How much do you owe my master?’ 6He answered, ‘A hundred jugs of olive oil.’ He said to him, ‘Take your bill, sit down quickly, and make it fifty.’ 7Then he asked another, ‘And how much do you owe?’ He replied, ‘A hundred containers of wheat.’ He said to him, ‘Take your bill and make it eighty.’ 8And his master commended the dishonest manager because he had acted shrewdly; for the children of this age are more shrewd in dealing with their own generation than are the children of light. 9And I tell you, make friends for yourselves by means of dishonest wealth so that when it is gone, they may welcome you into the eternal homes.

10Whoever is faithful in a very little is faithful also in much; and whoever is dishonest in a very little is dishonest also in much. 11If then you have not been faithful with the dishonest wealth, who will entrust to you the true riches? 12And if you have not been faithful with what belongs to another, who will give you what is your own? 13No slave can serve two masters; for a slave will either hate the one and love the other, or be devoted to the one and despise the other. You cannot serve God and wealth.”

Money and wheat (from Canva)

“Jesus is the very friend we need and want when the bill for life needs to be paid. Not only does he cheat death, but he satisfies the One to whom we owe everything.”

Luke never gives us a clue as to why this manager thinks he can play fast and loose with his boss’s money, but that’s what the man does. And, when reprimanded by the boss, he gambles one more time, hoping to hedge his bets by gaining back a bit of what he has failed to collect, and returning the proceeds to the man to whom it originally belonged. Sounds like some sort of parabolic pyramid scheme. But the scene is only made more perplexing when we hear the boss commend this manager for making the best of a bad situation (never mind that he created the bad situation for himself).

One has to wonder whether the boss actually appreciated just how reprehensible his employee’s behavior was. (This is not to mention how Jesus lifts up his shrewdness as admirable.) It was simply a last ditch effort by the man to ingratiate himself both to the boss and the boss’s debtors. The manager forgave a portion of their debt, and thereby relieved the debtors of having the boss come after them personally. But the manager returned the proceeds to boss, potentially thwarting a worse disaster than losing his job.

This life may offer the possibility of making the best of a bad situation; shrewdness can have its rewards in this world. But can it win us a place in “the eternal homes”? We can’t possibly live certain that we’ve got a place in heaven. Not unless God chooses to change the rules! 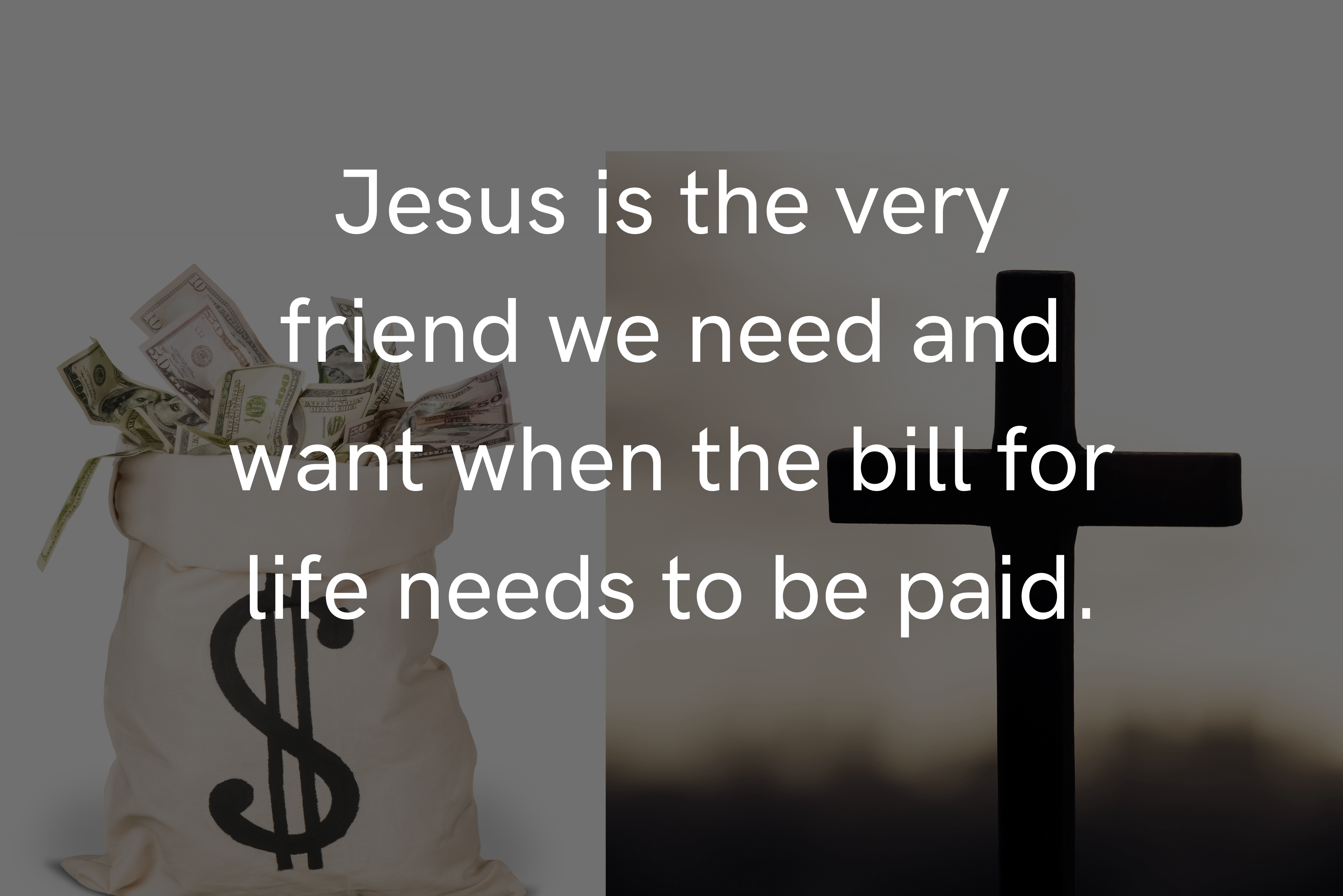 Bill for life (from Canva)

We use the phrase “cheating death” to describe experiences in which someone has a brush with death but survives. But the truth is that even when we survive potentially fatal circumstances, death still gets the last word. That’s true for every one of us. It was true for Jesus too. When there was a debt to be paid (for all that we owe to God), he paid the price himself on the cross. The difference is that his shrewd choices not only saved him, and got him commended by the Father, but he received prime seating in the eternal homes (at the right hand of the Father). And from that prime spot he has chosen to cheat death for us and give us a place with him.

Jesus seems to be telling us that it’s smart to have good connections. And seeing what this Shrewd Savior accomplishes, we realize that the best connection is to Jesus himself. While we can never fully pay the debt that we owe to the Boss, Jesus the Manager knows how to get the job done, and to make peace between us and the Boss. Jesus is the very friend we need and want when the bill for life needs to be paid. Not only does he cheat death, but he satisfies the One to whom we owe everything.

Christians often have a reputation for being naïve. It’s not that we don’t know how to be shrewd, we’re just too concerned about appearing dishonest (especially to God). But what if Jesus’ own shrewdness (call it a risky investment that paid off) instead opens up the possibility for us to be smart about life-about handling money, about reaching out to strangers, about finding new ways to share the good news about God? The risk Jesus took at Calvary was made to free us up to think outside of the box, to develop ministries in store fronts, and pubs, and dance clubs—where the children of this generation can be found. It’s about time we got smart!