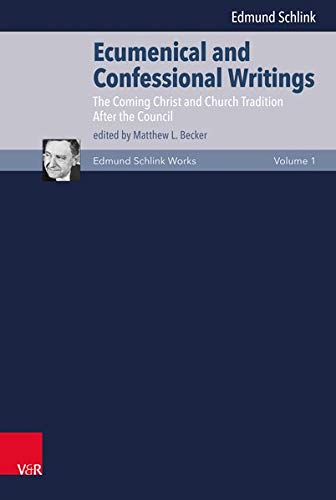 Back in the 1970’s, the nascent libraries of America’s earnestly Lutheran seminarians were likely to include two books by the German theologian Edmund Schlink. One discussed the Lutheran confessions. The other focused on the doctrine of baptism. Both had been issued in translation by Concordia Publishing House which, for a time, had shown some interest in introducing the best of Germany’s confessional thinkers to English-speaking readers. So had Fortress Press.

That interest appears to have evaporated in subsequent decades—or so one concludes from a quick scan of current offerings at both CPH and Fortress. Enter a lone warrior, Matthew Becker of Valparaiso University. Matt has spent much of the past many years on a projected five-volume project to make the bulk of Schlink’s work available in English. The first of these volumes was issued in 2016 by Vandenhoeck & Ruprecht, Schlink’s German publisher. The second became available for purchase a month and a day ago. 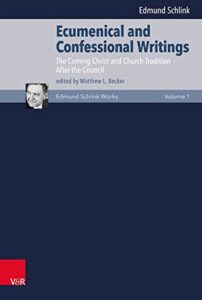 Today we send you an abridgment of Matt’s announcement, on October 12, of the second volume’s pending publication. It will give you a basic idea of what the book addresses. For a fuller picture of its contents, go to the original announcement. It appeared on his blog, “Transverse Markings.”

We thank God this Advent that Matt counts himself as a member of the Crossings community. That’s another reason for encouraging your attention to his work, and your support of it too. Perhaps you buy the book in question, or you recommend it to someone with a serious stake in what God gives the church to hear and think, to trust and say, and after that to act on. Yes, the price will make you blanch. When it does, remember that people pay far more for fleeting things of far less value. In any case, there’s a payment plan option, as you’ll see at Amazon.

A further thought along these lines. Could be there’s someone you’d like to honor and surprise with Matt’s book this Christmas—only, you say, Christmas is now too close. In that case, here’s a suggestion. Make the present on the Twelfth Day of Christmas, January 5. That’s the day before Epiphany when we recall the Magi showing up in Bethlehem. The Magi were the scholars of their day, as was Schlink in his (1903-1984). Those Magi pioneered the ecumenical embrace of the Gospel that Schlink devoted his life to. Matt the translator is now doing the same. For him—for them: thanks be to God again.

I’m pleased to announce the publication of Edmund Schlink’s Ecumenical Dogmatics. It is coming out in hardcover in two half volumes (1277 pages total). The work is really the equivalent of four 320-page volumes of church doctrine. It is the culmination of Schlink’s many decades of ecumenical work and teaching, principally at Heidelberg University, where he established an ecumenical center after World War II.

Ecumenical Dogmatics reflects Schlink’s deep understanding of both Western and Eastern traditions of Christian doctrine and practice. He was the principal Lutheran participant in the World Council of Churches (WCC) in the 1950s, ‘60s, and early ‘70s. He also served as the official observer from the German Protestant Church at Vatican II, where he became a leading spokesperson for the non-Roman observers. He has influenced many American Lutheran theologians, especially Walter Bouman, Won Yong Ji, Robert Jenson, Carl Braaten, Eugene Skibbe, and others.

Schlink’s dogmatics is the most significant summary of Christian doctrine written between Karl Barth’s Church Dogmatics and Wolfhart Pannenberg’s Systematic Theology. Indeed, his work contains material that is found in no other dogmatics text with which I am familiar. While Schlink is most known among Americans for his Theology of the Lutheran Confessions and his little book on baptism, his Ecumenical Dogmatics was his opus magnum. It has never been translated into another language until now. In its German form, it has continued to be an important resource for university theology students who are preparing for their exams in Christian doctrine. I’m hoping that the book will be read by American pastors, seminarians, and graduate students, but given the editorial notes that are unique to the American Edition, I think even lay people will find its content accessible and edifying.

Pannenberg (who was Schlink’s assistant for many years) wrote the preface. One of the two forewords was written by Schlink’s long-time friend, the Roman Catholic theologian Heinrich Fries. The other foreword was written by another of Schlink’s friends and WCC associates, the Greek Orthodox theologian Nikos Nissiotis. The afterword is by one of Schlink’s last assistants, Michael Plathow. In addition to serving as the principal translator (assisted by Hans Spalteholz, Robin Lütjohann, Mark Seifrid, Ellie Wegener, and Ken Jones), I wrote the 25-page introduction and all of the editorial notes (more than 500 of them).

The abiding strength of the work is the way in which Schlink brings theological insights from all of the principal church fathers and subsequent key theologians (both Eastern and Western) into conversation with one another. He identifies points of convergence and areas of ongoing disagreements. He also suggests ways forward for overcoming the differences and historic conflicts.

While Luther is clearly Schlink’s most important non-biblical influence, other thinkers who receive significant attention include Irenaeus, Augustine, the Cappadocians, Cyril of Jerusalem, John of Damascus, Gregory of Palamas, Anselm, Aquinas, and Calvin. They also include Schlink’s most important 20th century contemporaries, e.g. Barth, Rudolph Bultmann, Karl Rahner, Fries, and the principal Orthodox participants in the WCC. (Rahner was also a friend, as were Joseph Ratzinger—later Benedict XVI—and Hans Küng, who also make appearances in the book). Thus the book is not only a contemporary summary of the Christian faith but also an excellent resource for gaining a deeper understanding of the history of Christian doctrine. There are more than 2000 Scripture references, but Schlink also draws heavily upon the Lutheran confessional writings and other historic confessions in the history of the churches.

I hope that the book might be used in ecumenical study groups or as a text that invites theological dialogue among pastors and other church leaders. It could serve as a discussion starter for a set of pastoral circuit meetings. I also hope that at least a few professors of systematic theology will use the book in their teaching, and perhaps will even assign it as a text for their seminarians or graduate students. And I do think that the work could serve as a kind of “refresher course” in Christian doctrine for pastors and other church leaders.

The book is now available from its publisher, Vandenhoeck & Ruprecht Verlage, and from Amazon. If someone wants to order a review copy, it will be available through V&R’s American distributor in Bristol: tel. 860-584-6546.

Whatever proceeds I receive from the sale of the book will be given to charities, e.g., Bright Stars of Bethlehem, the Red Cross, Habitat for Humanity, as well as local Lutheran congregations.

If you’d like to see a sampling of the table of contents, go to my blog page.