To those of you receiving and reading these words in other parts of the world, this is the ubiquitous American greeting for today, the fourth Thursday in November, commonly called Thanksgiving Day. Wikipedia ranks it as the second most widely observed of American holidays, the first being Christmas, though it exceeds Christmas in the number of travelers it draws to roads and skies in a determined effort to get home. The day was established as a national holiday in 1863 through a proclamation issued by Abraham Lincoln, though penned by his Secretary of State, William Seward. It extols “bounties…which are of so extraordinary a nature, that they cannot fail to penetrate and soften even the heart which is habitually insensible to the ever watchful providence of Almighty God.” This, mind you, was written in the middle of the Civil War. Would that Seward’s perspective were one that all of us could share in the midst of the current pandemic.

Most Americans are enduring a quieter Thanksgiving than usual today—or at least we hope so. Word has gone out from public health officials at every level to forgo the travel and avoid the big family gatherings that most all of us look forward to. “Show up today; leave Grandma sick tomorrow.” That’s more or less the message. Though in times as fractious as these we won’t be surprised if half the land ignores it. God grant that they don’t. Hospitals in America are already groaning from the spike in infections this month. Let all of us mingle our prayers of thanksgiving with prayers for repentance on a nation-wide scale.

With this we segue to the meat of our offering today, a reflection by Richard Gahl on the folly of churches that ignore the obvious. And with this as teaser, we urge you to read on.

Reflections on an Observation by Lesslie Newbigin 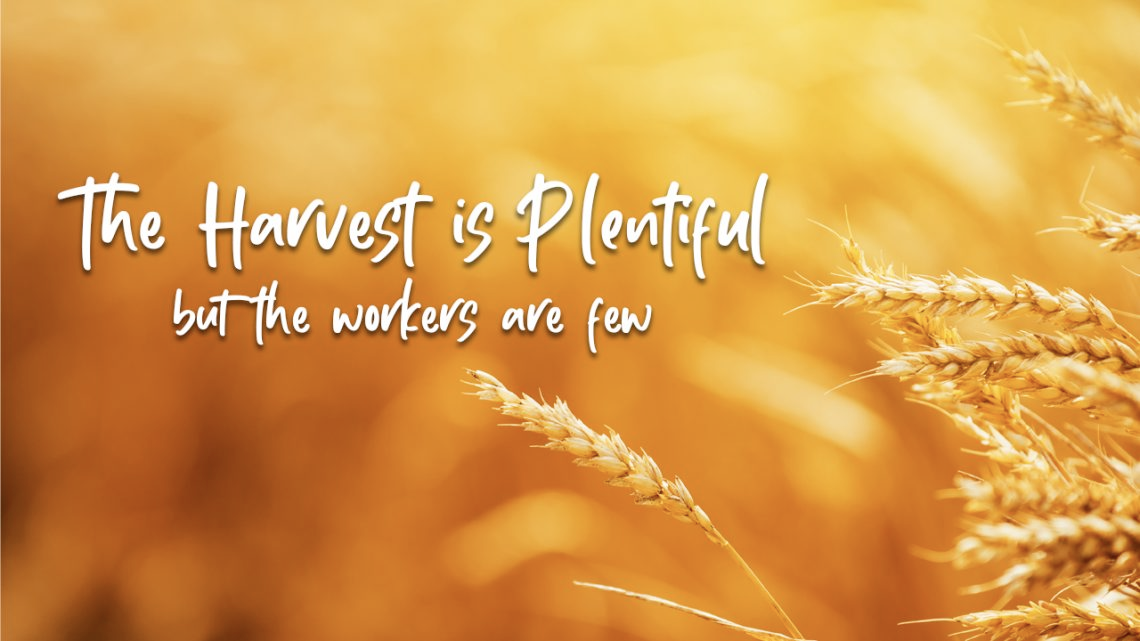 In the sixth of the 1952 Kerr Lectures at Trinity College, Glasgow, the late great British missiologist Lesslie Newbigin identified three indicators that a given church body or congregation is failing to grasp the truth about the Church’s essential nature as a missionary movement. SCM Press published these lectures in 1953 under the title The Household of God: Lectures on the Nature of the Church. This old diagnosis raises a question: has anything changed in the last sixty-eight years?

Newbigin begins his diagnosis with Emil Brunner’s famous assertion: “The church exists by mission as a fire exists by burning.” He then observes “the attitude among the majority of churchmen [sic], that while missionary work is an admirable thing to do within reasonable limits, it is not something without which the church simply falls to the ground.” In other words, many churches regard mission as “admirable” but by no means essential. Newbigin disagrees and comes down forcefully on the side of essential. 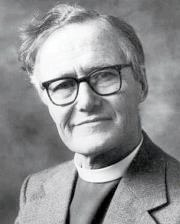 Newbigin’s Three Indicators of a Failure to Grasp Mission

Commentary, with a giant mea culpa!

A. My first call was to a start-up congregation of about 50 people in Huntertown, Indiana that was currently meeting in a store front of a small town in semi-rural America. The call included the additional charge to initiate a second congregation in the Leo-Grabill area about ten miles to the east. The Missouri Synod’s Indiana District provided financial assistance for these efforts. Looking back, I realize that I saw the “mission strategy” as recruiting existing Lutherans who had moved into this area from nearby Ft. Wayne and reorganizing them into the two congregations. Identifying property and constructing first-unit facilities was to take place as quickly as possible. In January and June of the fourth year both congregations dedicated church buildings. Each group numbered around 150. When I look back on those years, we were a “mission” because we received financial assistance from the regional judicatory, not because we were intentionally seeking out people who had not heard the Good News of Jesus Christ. Mea culpa!

B. What changed—and when? After sixteen years of serving congregations in Huntertown and Pennsylvania, we moved to Cleveland, Ohio where I took up an executive position in the LCMS’s Ohio District which included oversight of Missions. An unexpected bonus was intentional twice yearly meetings with district-level colleagues from widely varied geographical and cultural locations across the United States and Canada. We would gather in places as far apart as New York City and Vancouver, British Columbia to learn from each other. At a gathering in Phoenix I heard for the first time that the United States was the fifth largest mission field in the world. This raised a lot of questions. How could it be? Wasn’t everybody connected with a church? What might this mean for my responsibilities with the 160+ congregations of the Ohio District?

C. At one of those early “network” meetings a person from the national office asked me in public what I was doing about the six million unchurched people in Ohio. He then introduced all of us to the work of the Glenmary Sisters in Baltimore. Every ten years this religious order painstakingly matched the U.S census county by county with the reported adherents of every religious group they could information about. Bahai, Mormon, Muslim, Jehovah’s Witness, Jewish, Amish—all were included in data that grew in perspective with each new census. Now I knew how suspect the “adherent” numbers were for Ohio’s LCMS congregations. In a normal year 20% to 30% of membership failed to appear in church even once. I knew that in any given year about 25% of the congregations would fail to submit an annual report, which meant the out-of-date numbers were being repeated year after year. Still, it was information. With a little effort one could see that there was a significant population around every congregation that had no church connection. And of course the national executive was wrong about Ohio. The number of the unchurched was not six million but seven and a half million! So it was time to work at changing the culture and practice of congregations so that they would into the calling of every congregation to be an outpost of God’s mission in their community. Intentional information-sharing visits were scheduled with every one of the thirteen circuits. Individual congregations were selected for special attention as part of a district-wide strategy.

D. Of course, not everybody caught on. Two or three years into our concerted “mission outposts” messaging a letter landed on my desk from one of our pastors who stated very forcefully that his was not “a mission congregation.” True, they did not receive financial assistance from the district. But scarcely a dent had been made in the culture that defines a congregation’s calling as a matter of taking care of its own members. There was much more work to do. 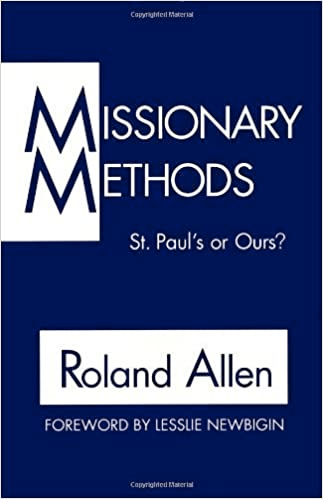 E. Newbigin holds up two sets of congregational practices: caring for members and intentionally connecting with those who have not learned to trust Jesus. To suggest that intentionally reaching out follows after the needs of the members have been met makes for the situation where there is always one more member to care for immediately (especially during a pandemic). In my firm view it is not an either/or. It has to be a both/and. Perhaps one describes it better as a creative tension. Perhaps this month the congregation focuses on the church family. Next month efforts are made to connect with unchurched neighbors and potential hearers of the Gospel in the community. And I know it is easy to write this and so difficult to work out on a day by day basis.

F. Fortunately, Newbigin provides a big clue for understanding the “failure” which consolidates existing gains before moving on to new locations. He points us to Roland Allen’s classic Missionary Methods, St. Paul’s or Ours (first published in 1912 and revised in 1927) in which Allen, who served in China, questioned how it was that Paul could have a new congregation up and running, as in Ephesus, in a matter of two or three years, while much current work was taking two centuries. Treating new converts in mission fields as mature adult Christians capable of making their own decisions is difficult. I know examples of church bodies that even today require the seminaries of so-called partner churches to clear a list of visiting lecturers with “Jerusalem” first ,and intervening when a partner church desires to do something the senior partner does not approve of.

The goal of these posts: To reestablish a sense of urgency in congregations to reach out to those not yet trusting Jesus. This was Newbigen’s diagnosis of failure in 1952-3. It is pretty much the same issue in 2020. Using the metaphor from Emil Brunner, it is high time to get our fire relighted. There are vast numbers of people all around our congregations who have not learned to trust Jesus. “As my Father sent me, even so I am sending you.”

It is essential to note that a major difference in 2020 is the world-wide coronavirus pandemic. I am haunted about the ways to do mission where face to face conversations are very difficult and social distancing is the safe way to keep down the spread. Yet to relegate mission to second place after other churchly matters are attended to is, as Newbigin says, a failure. We are living in a unique and fraught situation in which those who neither know or trust the Christ cannot have their opportunity to hear the Good News postponed. The question become a puzzling “how.” This is not a time for heaping up guilt on the heads of the people of God. At the very least it is a time for creative, prayerful conversation. May the Lord of the Church bless us with wisdom in these hard pandemic days.