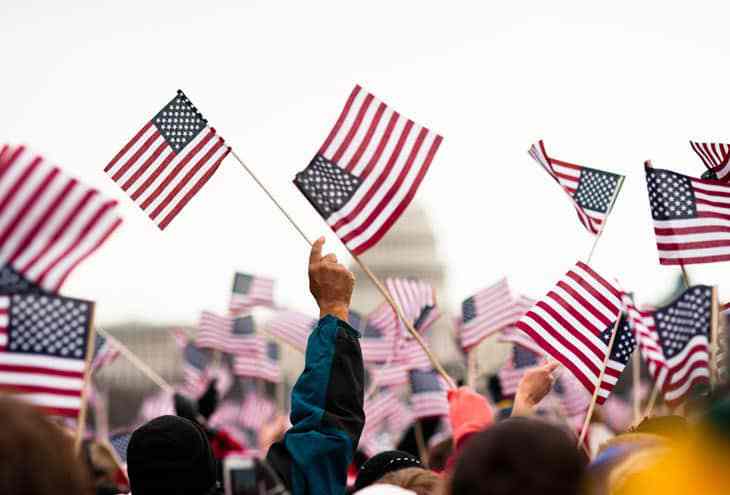 Tumult followed a political rally in North Carolina last week. It prompted our editor to vent.

Peace and Joy, notwithstanding

The current occupant of the Oval Office instigated another flood of impassioned ink last week. The man has a knack for this. Possessed of a middle-school mindset, sulky and devious, he exults in it too. Or so I guess. How could he not? Nothing bespeaks power more vividly than the sight of every grownup in view frothing at the mouth for the five hundredth time over the latest flagrant transgression of yet another bedrock standard of decency, their sputtering compounded by the knowledge that there’s not a thing they can do to restrain the brat from a five-hundred-and-first transgression. Indeed, the more they sputter, the likelier it is that he’ll flip them the bird again, a gloating leer on his face as he does it.

The irony is that the adults have no responsible choice except to sputter, and thus to egg the man on. No matter. It simply must be shouted loudly in the land that you’re not allowed to speak of dispatching fellow citizens, to say nothing of elected representatives of the people, to the “shithole countries” they came from. (I conflate transgressions here in the confident assumption that the folks who chanted “Send ‘em back” at the Greenville rally made the same conflation automatically.) Stop it, already! Such talk is a great gob of spit hurled in the face of Lady Liberty, a point the other foam-flecked adults have been underscoring these past few days in lengthier, more erudite ways.

This too has got to be shouted, and even more stridently: such talk is a sin against Christ. It incites rebellion against the Father at whose right hand Christ sits. The spirit that animates it is the antithetical enemy of the Holy Spirit. Kyrie eleison.

Not that, in my limited scanning, I have caught anyone else saying this. Nor do I expect to hear it said, and certainly not to the degree of bluntness it requires. Those writing and speaking in secular venues won’t say it at all. They dare not. If deprived of the requisite faith, they cannot say it in any case. The very notion that such a thing merits saying will strike them as risible. It will not cross their minds to waste time on such a thing.

Few baptized adults will think to say it either. It’s as if we too have forgotten that Christ has a stake in our civic conduct.

I squirm with shame as I write these words. Every other Christian grownup in America should be squirming too. I don’t suppose that many are. Again, and all the more, Kyrie eleison.

This sense of shame hit me in earnest last Friday when I read David Brooks’s lament about the president’s misbehavior. In responding to it, he extolled the idea of America at its best. Long ago, in my adolescence, this idea thrilled me too. Then I grew up and started paying attention to another vision of which the American dream is but the palest of imitations:

“After this I looked, and there was a great multitude that no one could count, from every nation, from all tribes and peoples and languages…. They cried out in a loud voice, saying, ‘Salvation belongs to our God who is seated on the throne, and to the Lamb!’” (Rev. 7:9-10).

No one in this crowd is chanting “Send ‘em back.” They are saved from such iniquity. With hearts forever fixed on the Lamb, they can’t begin it imagine it. Standing there they drink in the sights and sounds of humanity in its multihued, polyglot glory. Wherever they turn, the see sisters and brothers. They laugh with joy.

This is the promise that prophets and apostles pitched. Of all the threads that run through the Bible from beginning to end, it’s about the thickest. In Abraham “all the families of the earth shall be blessed (Gen. 12:3). On account of Abraham’s seed “all flesh shall see the salvation of our God” (Luke. 3:6, paraphrasing Isaiah 40:5). In Christ’s death the wall of hostility between your crowd and ours has been knocked down, and “through him both of us have access in one Spirit to the Father. So, then you are no longer strangers and aliens, but…members of the household of God.” (Eph. 2:14, 18-19). And in this interim, when we see as in a mirror, dimly, some getting it and others not, those who do get it will practice the love of God in Christ that “bears all things, believes all things, hopes all things, endures all things,” emphasis on the word “all” (1 Cor. 13:7, 12). For the neighbor’s sake they will “deny themselves and take up their cross and follow [Jesus]” (Mark 8:34); and with Paul they will rejoice in their sufferings, completing in their flesh “what is lacking in Christ’s afflictions” to wrap that neighbor in the promise too (Colossians 1:24, as heaps of Christians heard this very Sunday). 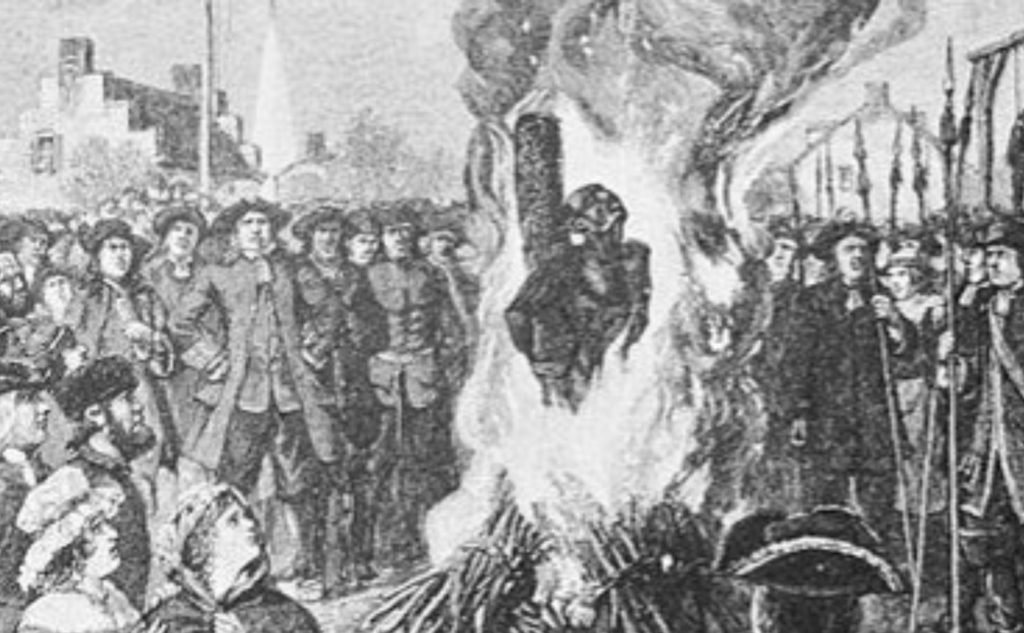 If only the church was comprised through and through with people who took this stuff seriously. It isn’t. It never has been. And so, the vision languishes. Enlightenment thinkers dropped it in the garbage four hundred years ago and conjured replacements. The tune Brooks hummed the other day was one of these. Again, it doesn’t hold a candle to the real thing. Yet who but a few mad holdouts will dare any longer to tout the original, expecting unpersuaded others to give it a second look? There’s too much history of Christian mobs spitting gobs of putrid ugliness at the prodding of their own powermongers, no one pausing to notice how the face it’s landing in belongs to Christ, their putative Lord. Or if someone dares to point this out, they bay regardless: “Slaughter the Saracens!” “Burn the heretics!” “Enslave the Africans!” “Kill the Jews!” Last week’s “Send ‘em back” is kiddie play by comparison.

The ugliest of all the chants is “Send ‘em to hell!” To this day disguised versions of that keep welling up from every corner of the church, including those that fancy themselves beyond such thoughts. You can catch it in the haughty sniff by which the uber-righteous dismiss the cretins they disagree with. They believe wrongly. They choose poorly. They act deficiently. They stood with the other side in the last election. They’re incorrigible, immune to our wisdom. They’re not worth our time. To hell with them.

I’m all too aware that what I’ve written so far could be heard as one such sniff. God help me if it is. Or in awareness of the sin infecting us all, better that I put it this way: God help me to the extent that it is: so written, so heard. God help you too. “Count on me,” says Christ, who hears our prayers.

After that comes the daily call to fasten eyes on our Lord’s back and follow his lead. A few Sundays ago, lots of this year’s Christians listened in church to the first episode in Luke’s great account of Jesus’ peregrination to Jerusalem. Ugliness erupts—immediately, as Mark would add were he the writer. A village of Samaritans—those people! —lets it be known that Jesus isn’t welcome to spend the night. “Torch ‘em,” says James and John, doubtless hoping that others in the entourage will join in. Jesus abruptly chews them out. Then he keeps going. Strangely, even shamefully as some might argue, he hasn’t dismissed those brothers two who lusted for their little holocaust. They’re still in his company (Luke 9:51-56). I hear them muttering as they shuffle down the path behind him. It will take a while for the light to dawn, some days or weeks or after Easter, I’m guessing. That’s when, looking back, they’ll start to get what God in Christ is for and about. In Luke’s great summation, “The Son of Man came to seek out and to save the lost” (19:10). “The lost” is a huge, encompassing term. It includes churlish, xenophobic Samaritans; also, stupid power-mad disciples, riddled through and through with appalling notions of what is appropriate or even righteous. Still more to the point, it includes every member of the mob that chanted “Crucify him!” in Pilate’s courtyard. Or those other mobs so quick to dump him in the garbage today.

This is the foundation of the great vision the Bible pitches. This very day the Holy Spirit pushes us not only to see it in our minds’ eyes but to grab hold of it with our hearts, and after that to act on it. Somewhere in that crowd around the throne James and John are swapping jokes with the Samaritan village elders who told Jesus to beat it. A few yards away some former fans of “the Squad”—insufferable in their moral certainty, and this even in the estimation of the insufferable Maureen Dowd—are rubbing shoulders with former fans of the insufferable Donald Trump. One finds them there because Christ the Lamb suffered them all, and suffered for them.

Who then will we not suffer today even as we dare them to call them out?

But this is our Christian shame, that so very few over all the years have picked the cross up and dared in love to do this, enduring the ugly scary other whose views and habits they can’t abide. Because of this the great vision has withered. No one finds it plausible let alone compelling, not even the diehard churchgoers whose ears get washed in the Word every Sunday. One thinks of the old joke about the guy getting his first tour of heaven who wonders what the big brick enclosure is all about. Answer: “That’s where we keep the [Catholics/Lutherans/Fill-in-the-Blank] so they can keep pretending they’re the only ones up here.”

And in lieu of the vision we get the wistful hope that America might be able somehow still to pull off a pathetic simulacrum of what Christ could not, if only we can get our wits together. One more time: Kyrie eleison.

America needs nothing less than a Christ who will set aside our crimes against him.

I pray that Christ will suffer me today, and cover my shame, and forgive my sins, and endure my unbelief. I pray he does that for us all. In fear and trembling I trust he’ll do that. He promises to. So much the better if, before the sun goes down, he shoves someone in my face who it hurts to love. I need the practice.