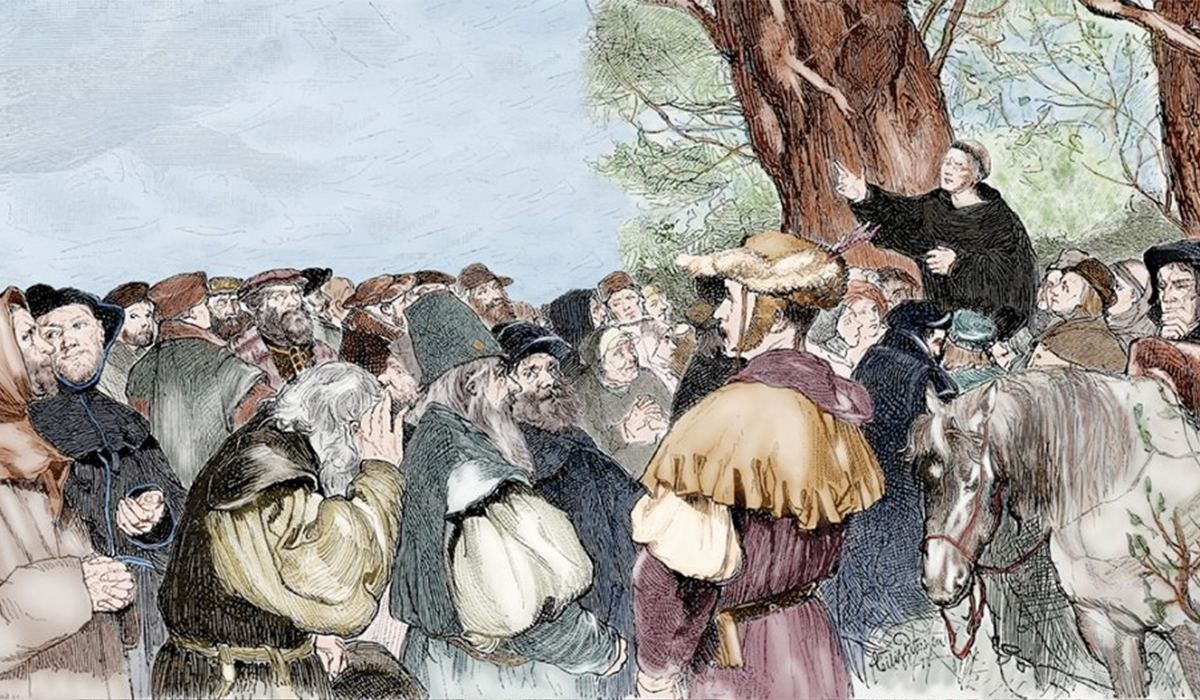 On this 502nd anniversary of Martin Luther’s 95 Theses, we remind you of the first of them:

“When our Lord and Master Jesus Christ said, ‘Repent’ (Mt. 4:17), he willed the entire life of believers to be one of repentance.”

Such is the speck of a pebble that launched the continental rockslide we know in retrospect as “the Reformation.”

By way of comment on the present validity of Luther’s assertion, we pass along a portion of the sermon our editor preached twice this past Sunday in an ELCA congregation that continues to celebrate the Reformation. (Not all do, for some reason.) One of the groups that listened included a large number of people who aren’t Lutheran, or even “churched” at all. Hence the pitch of his remarks.

God grant a steady, day-by-day repentance to us all. Our Lord and Master Jesus Christ knows only too well how badly we need him.

“Repent! Believe the Gospel!”: God’s Word for Lutherans and All Christians Today

(plucked from a Reformation sermon by Jerome Burce; title added after the fact) 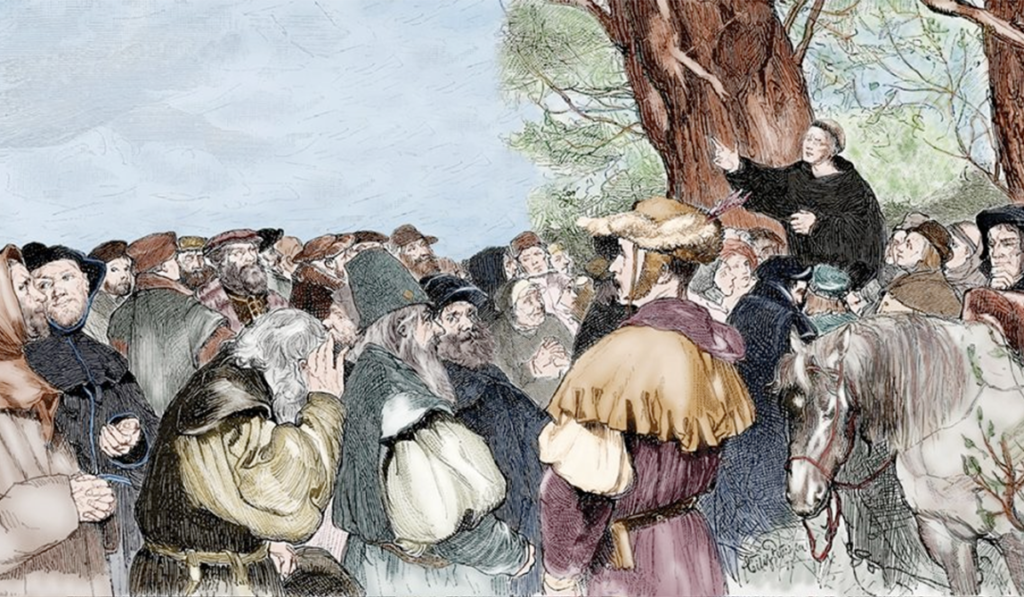 “If you continue in my word,” Jesus said—if you trust what I am telling you—”then you will know the truth, and the truth will set you free.” Free above all from the pressure of having to prove that you’re good enough for God and fit for the future that God has in mind for his children. It means you’re also free, at least where God is concerned, from having to prove that you’re a whole lot better than other people are. Instead of that, you get to love those other people. Imagine that.

I’m glad we do that, by the way. We ought to do it, and I pray to God that we Lutherans will be stubborn, and dig in our heels, and will always have the good sense to keep celebrating what happened in that little German town all those hundreds of years ago. And here’s why—because like everyone else we keep missing the main point, the one that God used Luther and his colleagues to lift up.

The main point is this: it’s not about me and what I do. It’s about Christ Jesus, and what God does in Christ Jesus to give all of us the life, the future, that God wants us to enjoy forever, beginning right now.

Not that you have to celebrate the Reformation to hear the point being made. In all those other churches out there, the ones without a Lutheran label, today is an ordinary autumn Sunday, except in the Southern Hemisphere where it’s an ordinary spring Sunday. Anyway, in lots and lots of those churches people are listening this morning to a Gospel text that takes us to the very heart of what the Reformation was about. It’s a little parable from St. Luke’s Gospel, a story Jesus told. A lot of you know it well. It goes like this–

He also told this parable to some who trusted in themselves that they were righteous and regarded others with contempt: 10‘Two men went up to the temple to pray, one a Pharisee and the other a tax-collector. 11The Pharisee, standing by himself, was praying thus, “God, I thank you that I am not like other people: thieves, rogues, adulterers, or even like this tax-collector. 12I fast twice a week; I give a tenth of all my income.” 13But the tax-collector, standing far off, would not even look up to heaven, but was beating his breast and saying, “God, be merciful to me, a sinner!” 14I tell you, this man went down to his home justified rather than the other; for all who exalt themselves will be humbled, but all who humble themselves will be exalted.’ 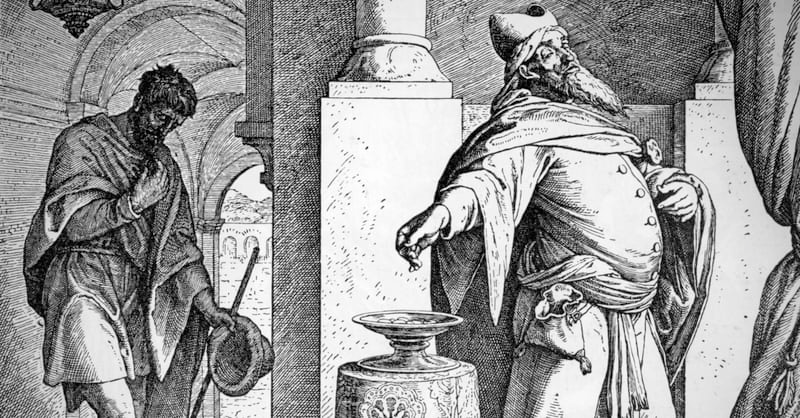 There are a number of things I want us all to notice here. They all cut straight to the big points Luther made.

So first, notice how this story is about how to wind up justified; that is, how do you go to the point where God claps his hands and says, with a great warm smile on his face, this person is all right.

I’m a pastor, of course. I’ve spent a lot of time in meetings with other pastors. Lutherans in America are bunched in two main groups, with a handful of smaller ones. I was raised in one of the main groups, the Missouri Synod. That’s where Messiah started off too. These days we’re in the other main group, the Evangelical Lutheran Church in America. 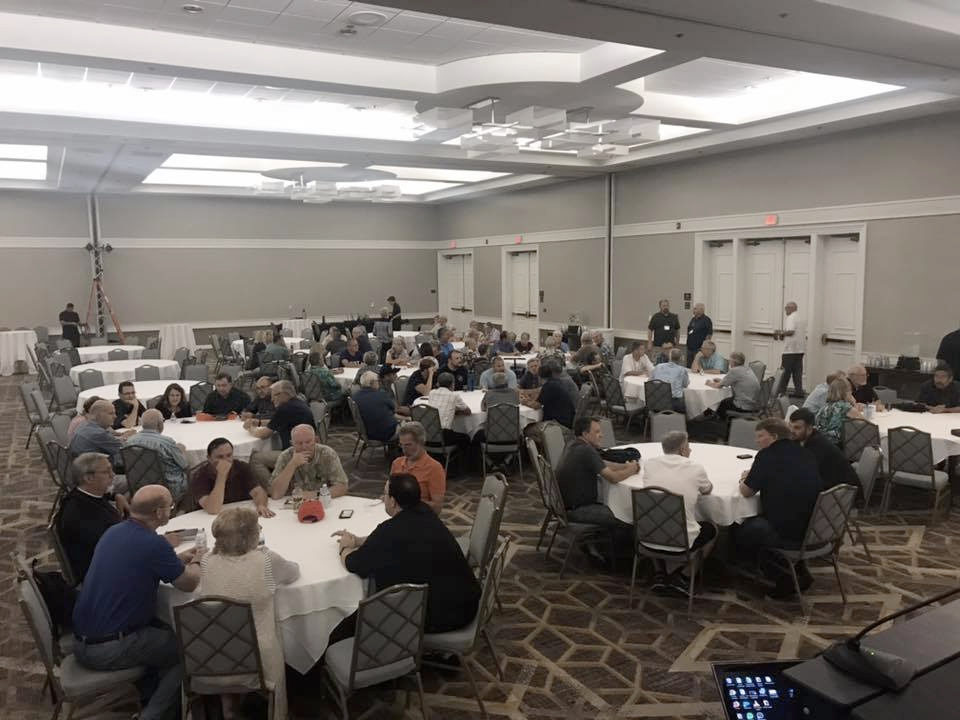 So here’s how it goes when pastors meet. At some point in the meeting somebody might mention the other main group. It’s like saying Democrat in a meeting of diehard Republicans, or Republican in a meeting of diehard Democrats. You know what happens. Just like that the room fills with scorn—contempt even. You can see it on the faces, you can hear it in the voices: a bunch of grown up people saying “Eew.” What God catches, of course, is the Pharisee’s prayer rising up from every heart: “Lord, I thank you that I am not like other Christians, and especially not like those other so-called Lutherans. I take the Bible seriously. I know the Gospel. I value sound doctrine. I preach social justice; I do my best to practice it too. Big bennies for me!

I wish I could tell you that I’ve ever spotted a pastor at one of those meetings sitting in a corner with his head bowed, saying “Lord, be merciful to me a sinner.” I haven’t; or if there was, I didn’t notice. I was much too busy feeling all puffed up and righteous myself, I suppose.

There is no pastor I have ever known who is righteous, no not one. That certainly includes the one I stare at in the mirror every morning.

The same is true for every Lutheran I have ever known, and yes, for every Christian, whatever the label or flavor. There’s not a one of us who can avoid the Pharisee’s big mistake. “Lord, I thank you that I am not like other people: rogues, scoundrels, unbelievers, or even like those other so-called Christians. I go to church every Sunday, or at least twice a month. Or maybe it’s like this: I trust you enough to skip church, knowing that I don’t have to go. In any case, I dig deep at stewardship time. I serve on committees. I help the poor. I hit yes when the check-out computer at the grocery store asks for an extra five bucks for the seasonal food drive. Bennies for me.

Sorry, says Jesus. You’re not impressing God. Anything but.

And having said that, now comes the good part. That’s where Jesus says, “whoever exalts herself will be humbled, and whoever humbles himself will be exalted.”

No one has ever exalted himself more than Jesus did. My goodness, he went around referring to himself as “The Son of Man,” as in the chosen one.

No one in turn was ever humbled more than Jesus was. My goodness, he died on a cross, surrounded by crooks, mocked by the multitude, tarred by our sin, our arrogance, our stupidity. God hid his face from Jesus—he left him “forsaken”—on that day he died.

What did God do next? He turned right around and lifted Jesus up on Easter Day. Then he exalted him even higher, far higher than any other flesh-and-blood person has ever been or ever could be. Today he sits at God’s right hand with the final say on what happens to every other human being who has ever lived, or ever will live. That includes Jeremiah and Paul and John. It includes Luther, and all of Luther’s opponents. It includes me. It includes you, your children too.

From Jesus, the Lord Jesus, comes a promise: “where I am, you will be also.” In other words, when God has torn me down because I need to be torn down—God can’t stand me as I am—then God will lift me up and make me like Jesus is: good and true and perfect, the kind of person that God, to say nothing of the rest of you, can live with forever. And God will do all this for Jesus’ sake. It’s who Jesus is that finally matters where any of us are concerned. As St. Paul says, let the person who boasts boast in the Lord.

And that’s the Gospel—God’s good news for us to hear and celebrate this Reformation Sunday, and not just now, but on all the Sundays that follow.

There will be never be a day when a person in this room doesn’t need to hear this.

There will be never be a day when Christ will decide to keep his mouth shut and stop saying it.

And now, tell this to your children. Share it with your neighbors. Treat the people you meet this week, whoever they are—however they are—as people Jesus died for, and lives for, this very day.