The Ten Commandments as a Resource for Daily Life 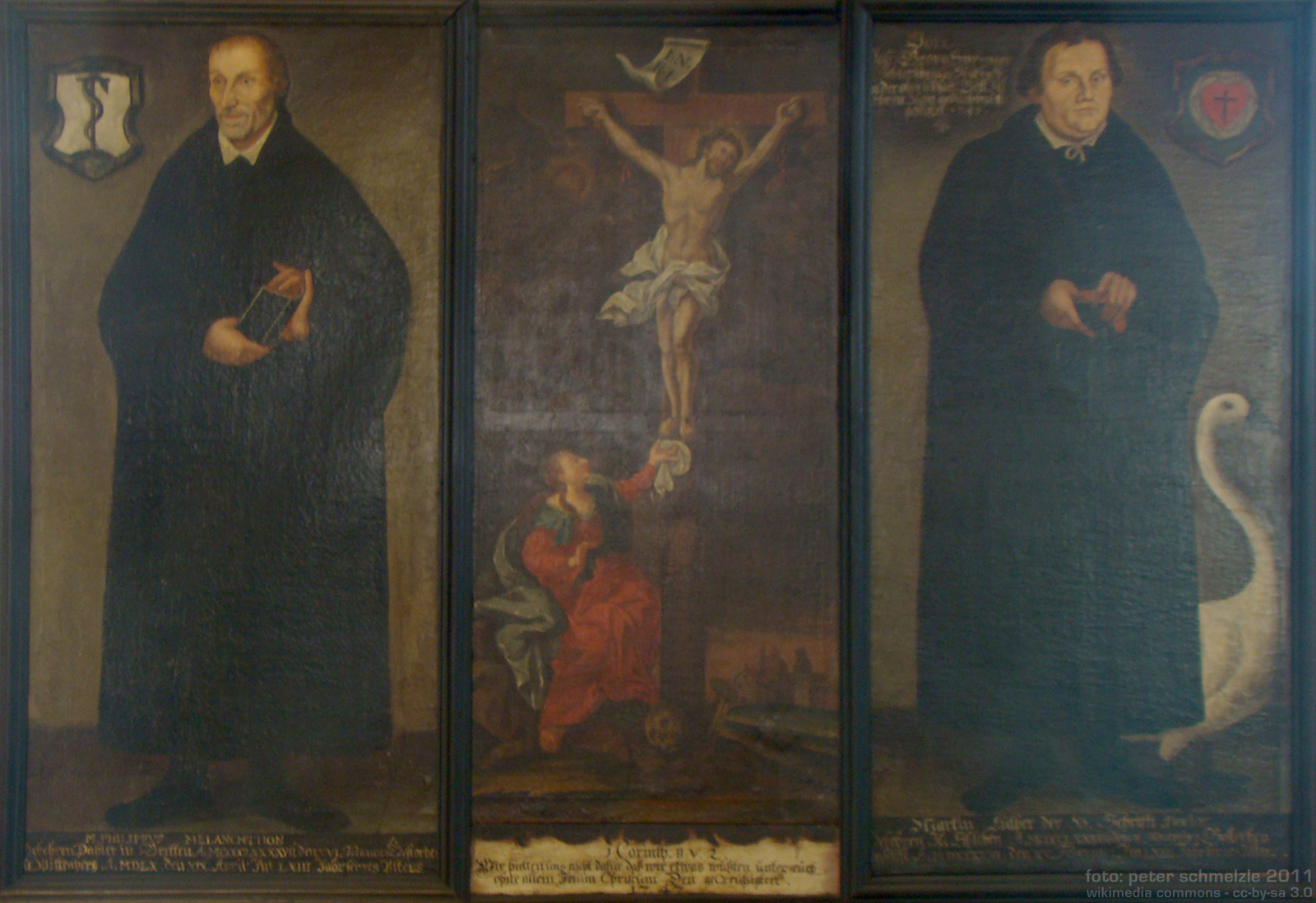 Martin Luther, Philipp Melanchthon and depiction of the crucifixion, historical painting in the Kreuzkirche in Bretten, painter unknown. Found on Wikipedia

Each month, many in the Crossings network gather via Zoom for Table Talk. Those who gathered in April were encouraged to read two articles from the Crossings library, both by Ed Schroeder and both about the “third use of the law.” Following the thought of Werner Elert, Ed clearly and forcefully rejects this view of the law. Table Talk participants benefitted from a thoughtful and engaging presentation by the Rev. Dr. Martin Lohrmann. Mining the writings of Luther, Melanchthon, and the Formula of Concord, Martin suggested that the Ten Commandments provide a useful resource for Christian faith and practice.

Following his Table Talk presentation, Martin wrote the following essay so that Thursday Theology readers could benefit from his research and insights. Martin Lohrmann teaches at Wartburg Seminary and serves on the editorial board of the Lutheran Quarterly. Among his many publications is Book of Harmony: Spirit and Service in the Lutheran Confessions (Fortress 2016).

Relational Uses of the Law: Insights from Luther, Melanchthon, and the Formula of Concord
by Martin Lohrmann

For a movement based upon justification by faith alone apart from works of God’s law, the Lutheran Reformation has many fascinating things to say about the diverse ways that the Ten Commandments speak to Christian faith and practice. In this article, I’d like to describe how Martin Luther, Philip Melanchthon, and the second-generation reformers who wrote the Formula of Concord (1577) valued lifelong engagement with the Ten Commandments as part of a healthy relationship between God and believers. I especially hope to show that the Lutheran theological category often called “uses of the law” expresses relational encounters with God’s word more than it attempts to make strict definitions.

To emphasize the Ten Commandments as a relational resource for daily faith, I will begin in an unusual place: a devotional writing by the later Luther called “A Simple Way to Pray” (1535), which Luther wrote in response to his barber asking him about how to pray. Here Luther described how he used the catechism—including the Ten Commandments—in his daily prayers. He wrote, “I divide each commandment into four parts, thereby fashioning a garland of four strands. That is, I think of each commandment as, first, instruction, which is really what it is intended to be, and consider what the Lord God demands of me so earnestly. Second, I turn it into a thanksgiving; third, a confession; and fourth, a prayer.” [1] Luther then gave examples for how to pray each of the commandments in this way before concluding, “These are the Ten Commandments in their fourfold aspect, namely, as a school text, song book, penitential book, and prayer book. They are intended to help the heart come to itself and grow zealous in prayer.” [2]

This passage shows Luther listing not a traditional two or a controversial three but four prayerful uses of God’s law. His list includes what theologians typically call the first and second uses, as his view of the commandments as instruction describes a Lutheran first (civil) use of the law: the practical need to protect the innocent and punish wrongdoing. Luther’s words about the law inspiring confession describe what Lutherans call the second (theological) use of the law: to expose sin and drive us to Christ, who alone is the righteousness of God.

Beyond these two uses, Luther shows that the law’s instruction remains valid for believers justified by faith in Christ as a source for knowing the will of God and living it out in heart, mind, soul, and body. This loving concern that grows out of faith is what distinguishes it from the first use, which focuses primarily on outward actions. In faith, we really do pray that we might honor God above all else and love our neighbors as ourselves! Further, the commandments serve as positive catalysts for giving thanks to God and for discerning specific prayer requests as we call upon God for all good things. These are also not part of the first use of the law as typically defined. In this text, therefore, Luther presented four ways that he literally “used the law” in prayer and daily life. Certainly not telling his barber that justification happens through the law, Luther nevertheless commended the many ways that the commandments support healthy Christian lives of faith.

Luther’s view of the law as both leading to true repentance and guiding the works of love that are performed in faith is helpful for understanding the “three uses of the law” developed by Philip Melanchthon. Intra-Lutheran controversies about the role of the law had started in the later 1520s, around the time when Melanchthon was writing the “Instructions for the Visitors of Parishes in Electoral Saxony” (also called the Visitation Articles), which served as a guide for officials visiting Saxon churches and implementing church reforms. Luther wrote the preface for the Visitation Articles and supported Melanchthon’s views in those debates.

Confronted with the recent lawlessness of the Peasants’ War and preachers who believed that Christians who knew the gospel did not need the law, [3] the Visitation Articles affirmed the need to instruct people in the Ten Commandments. Following a way of talking about “faith and love” as leading from repentance to saving faith and love for neighbors, which Luther developed in the 1520s and retained in following years, [4] Melanchthon described “repentance and faith” as the first two elements of Christian life. [5] Then, having emphasized that faith alone justifies, Melanchthon wrote,

The third element of Christian life is the doing of good works: To be chaste, to love and help the neighbor, to refrain from lying, from deceit, from stealing, from murder, from vengefulness, and avenging oneself, etc. Therefore again and again the Ten Commandments are to be assiduously taught, for all good works are therein comprehended. They are called good works not only because they are done for the welfare of our neighbors, but also because God has commanded them, and so they also are well pleasing to God. [6] 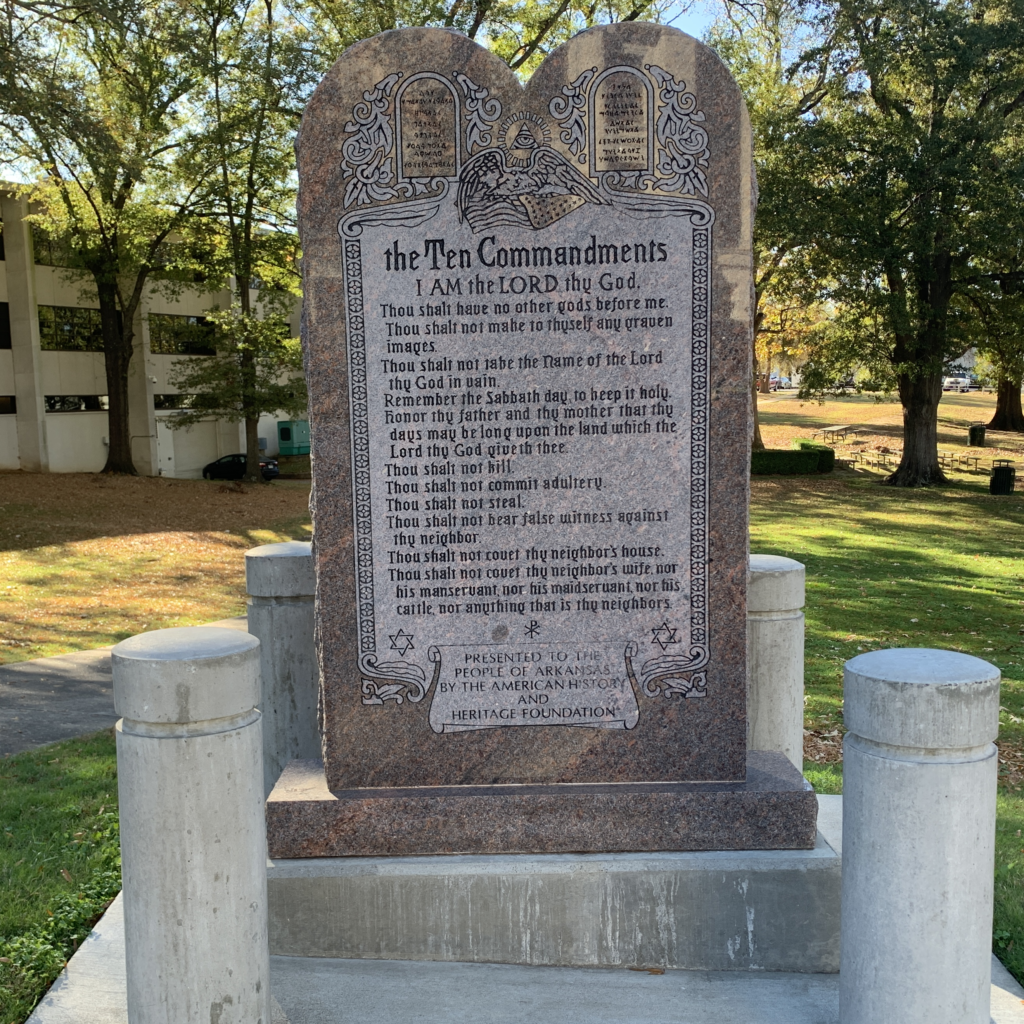 Melanchthon affirmed the law’s goodness in revealing God’s good will for us. In a world of chaos and violence, it is good that the law curbs sin. Theologically, although the law kills our sinful selves, it is also ultimately beneficial that the law reveals our sin and drives us to Christ. Third, Melanchthon noticed that the good works that spring from faith are nothing other than faithful Christians living into the two tables of the Decalogue through faith: trusting God above all else and loving our neighbors as ourselves. [7]

Melanchthon did not start explicitly naming a “third use of the law” until the middle 1530s, as external factors continued to push him to clarify the relationship between justification by faith and good works. Although such terminology might seem to be an innovation, by recalling Luther’s relational views of “faith and love” and Melanchthon’s Visitation Articles, we can see where this “third use” language is a way to highlight the positive use of the commandments in faith and not an innovation. It is therefore possible to appreciate both Melanchthon’s efforts towards theological precision and Luther’s more nebulous trust that people of faith will do good works simply because that’s how God works on us, in us, and through us.

In light of these relational and dynamic experiences of the law, I interpret the Formula of Concord’s article on the “three uses of the law” as purposefully ambiguous. We have gospel freedom when it comes to talking about the law! We absolutely need to avoid turning the gospel into a law or the law into salvation or a source of self-righteousness. At the same time, we know that gospel faith leads us to trust in God and love our neighbors—blessed effects of Christ’s free gift of grace which are none other than the two tables of the law.

Based on the blessings that Luther and Melanchthon sought to convey through the rich wrestling with God’s word (including the law), the Formula of Concord’s ambiguity regarding the uses of the law can be claimed as a theological strength. Its authors knew that labels are less important than affirming the mysterious radical change that happens on a daily basis through faith in Christ and the work of the Holy Spirit. While the Formula gives careful, nuanced descriptions of the law’s true and false roles in Christian life, the only explicit condemnation the Formula makes on this point is against those who teach that the law has no place in Christian faith, practice, or preaching. [8] Its openness to those who number or describe the “uses of the law” differently demonstrates a great Lutheran ability to tolerate diverse ways of talking about and living out our common faith in Christ.

The two articles by Ed Schroeder on the third use of the law that were commended for your consideration on this topic contain statements that I agree with and things that I don’t agree with. [9] In light of article 6 of the Formula of Concord, that’s okay! Whether you prefer to talk about two uses of the law, three uses of the law, four devotional uses of the law, “new obedience,” “fruits of the spirit,” “gospel imperatives,” or something else, the point is to know the Good Shepherd who actively and daily preserves this world, leads us to the gospel, and guides us along good paths of freedom and love.

[3] On Melanchthon’s concern that the Ten Commandments be retained as part of sharing the Christian message of repentance and faith, see LW 40:274-275. For his connection between the Peasants’ War and the Decalogue, see LW 40:286.

[7] Luther said something similar again as he concluded his discussion of the Ten Commandments in his Large Catechism: “For where your heart has such an attitude [of trust] toward God, you have fulfilled this commandment and all the others” (Book of Concord 430.324). 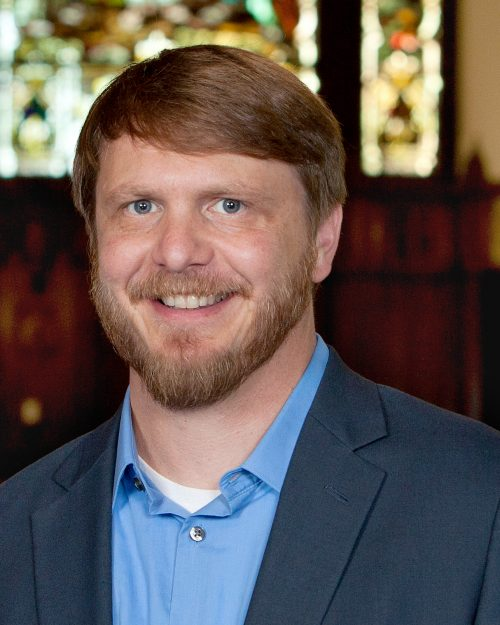