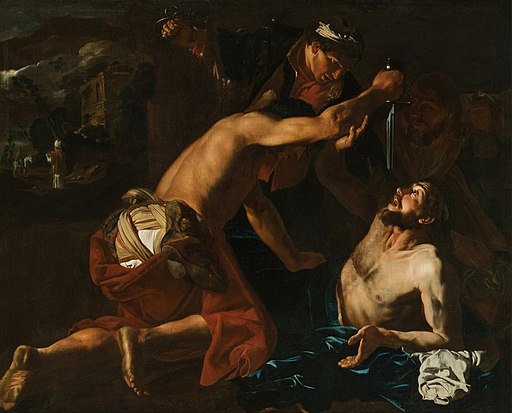 Our food for thought this week is a gift from the Rev. Dr. Steven Kuhl—a homily on the parable of the Good Samaritan from the 5th Sunday after Pentecost. As you’ll see, Steve focuses on the narrative sleight-of-hand that gives this parable its subversive power. When the self-justifying lawyer asks “Who is my neighbor?” he casts himself in the role of savior—walking down the road of life, glancing left and right, deciding whom he must help to earn God’s favor. But the story Jesus tells in response doesn’t follow a man on that kind of walk; it follows the man who ends up in a ditch, while others pass him by. In so doing, it recasts the listener in the role of one needing to be saved. And, as Steve argues, that role reversal is the key without which we’d never be able to “go and do likewise.”

This Sunday’s Gospel reading is a very familiar parable of Jesus: the parable of the Good Samaritan. Indeed, this parable is so familiar that the term “Good Samaritan” has become a shorthand designation for a person who goes above and beyond the call of duty to help someone whom we might not have expected them to help. And as noble as that idea is from a secular point of view, it is not exactly what Jesus means by the parable. For Jesus, being a good Samaritan, a good neighbor, isn’t exceptional. It’s just who he is and the neighborhood to which he is calling us. Let me explain.

The context of the parable is important. A lawyer (or expert in the law of God) had asked Jesus a question about what God expects from us to gain eternal favor, eternal life with God. As the text puts it, he desired to “justify” his existence; he wanted confirmation that he was a “good person,” and not only in the eyes of other people but also of God. So Jesus asked him, “What does the law say?” The man said that the law says, “Love God above all things and love your neighbor as yourself.” Jesus said, “That’s right. Do this and you will live.”

But the man’s own answer, the answer that the law gives, bothered him. It seemed too expansive. He knew (he thought) who God was, and he thought he could love God above all things; but he wasn’t so sure about who his neighbor was. For he believed that there were some people who simply weren’t worthy of his love, of being regarded as neighbors—people like tax collectors and sinners. So he asked the question: not “Who is God?” but “Who is my neighbor?” For he was sure that he knew God, and could regard God as worthy of his love—how big of him!—but he wasn’t so sure that he knew who his neighbor was, who were those worthy of his love. And he was hoping that Rabbi Jesus might have an answer that would limit the neighbor to those people who were like him, those who were worthy of his help, thinking, perhaps, that that is what the qualifier “as yourself” meant on the love-of-neighbor command. 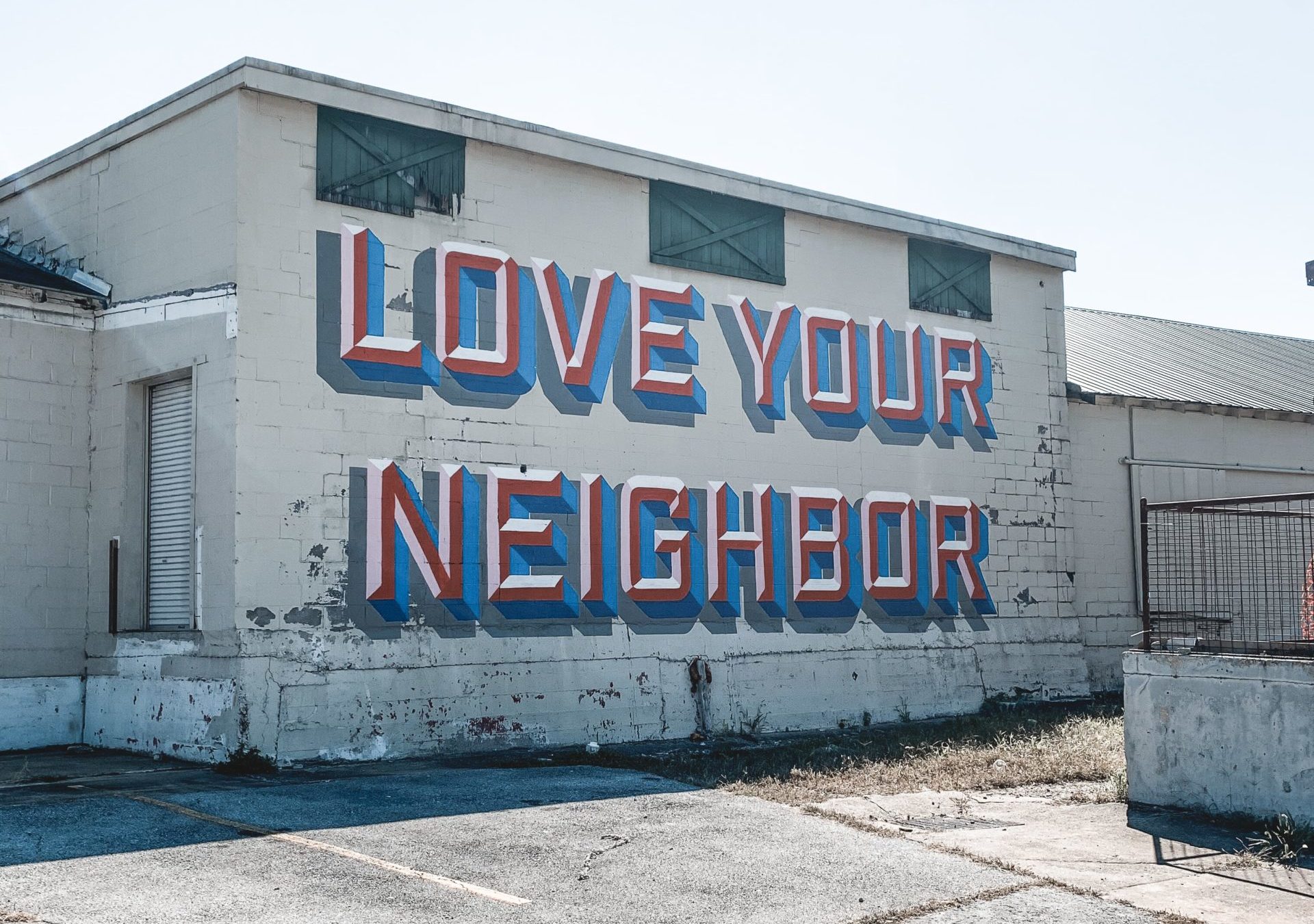 It is to this bothersome concern on the part of the lawyer that Jesus here tells the parable. And in one sense, Jesus does not relieve the man’s anxiety, at least not as the man was hoping, namely, by limiting the term “neighbor” to only those who are like him and who on that basis can be regarded as worthy of his help. Jesus’ parable, of course, in no way accommodates the scribe’s perspective or hope. But it does offer him a new, alternative, penitential perspective on himself, so he could entertain a more inclusive and expansive view of neighbor.

How does the parable do this? It does it, first of all, by bidding the lawyer—and us—to identify with the man who was beaten up on the road by thieves, and not with either those fellow Jewish kinsmen who passed the man by or with the good Samaritan who gave him aid. By doing so, Jesus wants us first of all to see ourselves as people in need of help and to define our “neighbor” as the one who comes to our aid. The Samaritan is thereby a neighbor to the man, even though they are as different as night and day, as different as Jew and Samaritan, lawyer and tax collector, black and white, young and old, male and female, gay and straight, Republican and Democrat. Who is my neighbor? First of all, the one who gives me help. Therefore, to whom am I called to be a neighbor? To anyone who needs my help. 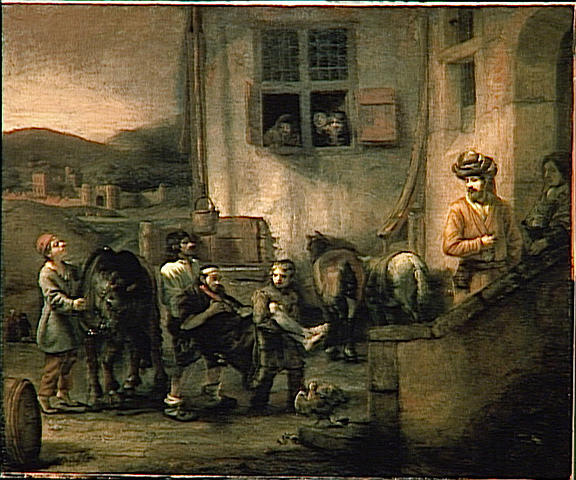 Therefore, the first meaning of the parable is this: Jesus is the “Good Samaritan.” Jesus is the good neighbor, because he has come for one purpose: to give help to whoever needs it. Above all, Jesus has been giving help to “tax collectors and sinners” by forgiving their sins and inviting them to be part of his neighborhood, the community of disciples that we call the church, the community that is like the inn where Jesus the Good Shepherd places us to be cared for and tended to no matter how different we might be from one another.

Unfortunately, as we have already seen earlier in Luke’s Gospel, for being this kind of a neighbor Jesus has been receiving all kinds of criticism from those, like the lawyer and the scribes and the Pharisees, who don’t see their own need for forgiveness. Indeed, they will become so offended by Jesus for extending neighborly mercy to sinners that they will accuse him (the Son of God) of blasphemy (of not loving God) and nail him to the cross. But as we will see, as will be revealed when God raises Jesus from the dead, the truth is that they don’t only not know who their neighbor is, but they don’t know who God is either—at least not as God wants to be known through Jesus as opposed to his law.

Unfortunately, that criticism of Jesus is their loss. For in truth, the lawyers, scribes, and Pharisees are not as different from the tax collectors and sinners as they might think. For in truth, they are as much sinners as are the tax collectors and sinners. The only difference is this. The lawyers, scribes, and Pharisees are able to use the veneer of their religious and cultural respectability to hide the truth about their sin, whereas the tax collectors and sinners can’t. But who are they fooling? Perhaps some people, certainly themselves, but certainly not Jesus and the God and Father who sent him. As a result, because they cannot see a need for a saving neighbor like Jesus—one who has come into the neighborhood of sinners to give his life for their salvation—they cannot “go and do likewise.” They can’t be loving neighbors to others as Jesus has been a loving neighbor to them.

Blessed are those for whom Jesus is their good neighbor, their Good Samaritan. For not only are their sins forgiven, the inheritance of eternal life promised, and justification before God secured, but they also value Jesus’ calling to be good neighbors, to “go and do likewise,” to love and forgive others as Jesus has loved and forgiven them. Welcome to the neighborhood of Jesus. 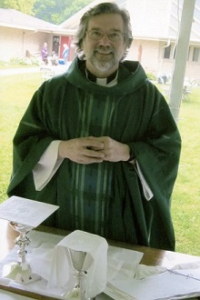