When Jesus Is Wrong?

He entered Jericho and was passing through it. A man was there named Zacchaeus; he was a chief tax collector and was rich. He was trying to see who Jesus was, but on account of the crowd he could not, because he was short in stature. So he ran ahead and climbed a sycamore tree to see him, because he was going to pass that way. When Jesus came to the place, he looked up and said to him, “Zacchaeus, hurry and come down; for I must stay at your house today.” So he hurried down and was happy to welcome him. All who saw it began to grumble and said, “He has gone to be the guest of one who is a sinner.” Zacchaeus stood there and said to the Lord, “Look, half of my possessions, Lord, I will give to the poor; and if I have defrauded anyone of anything, I will pay back four times as much.” Then Jesus said to him, “Today salvation has come to this house, because he too is a son of Abraham. For the Son of Man came to seek out and to save the lost.” 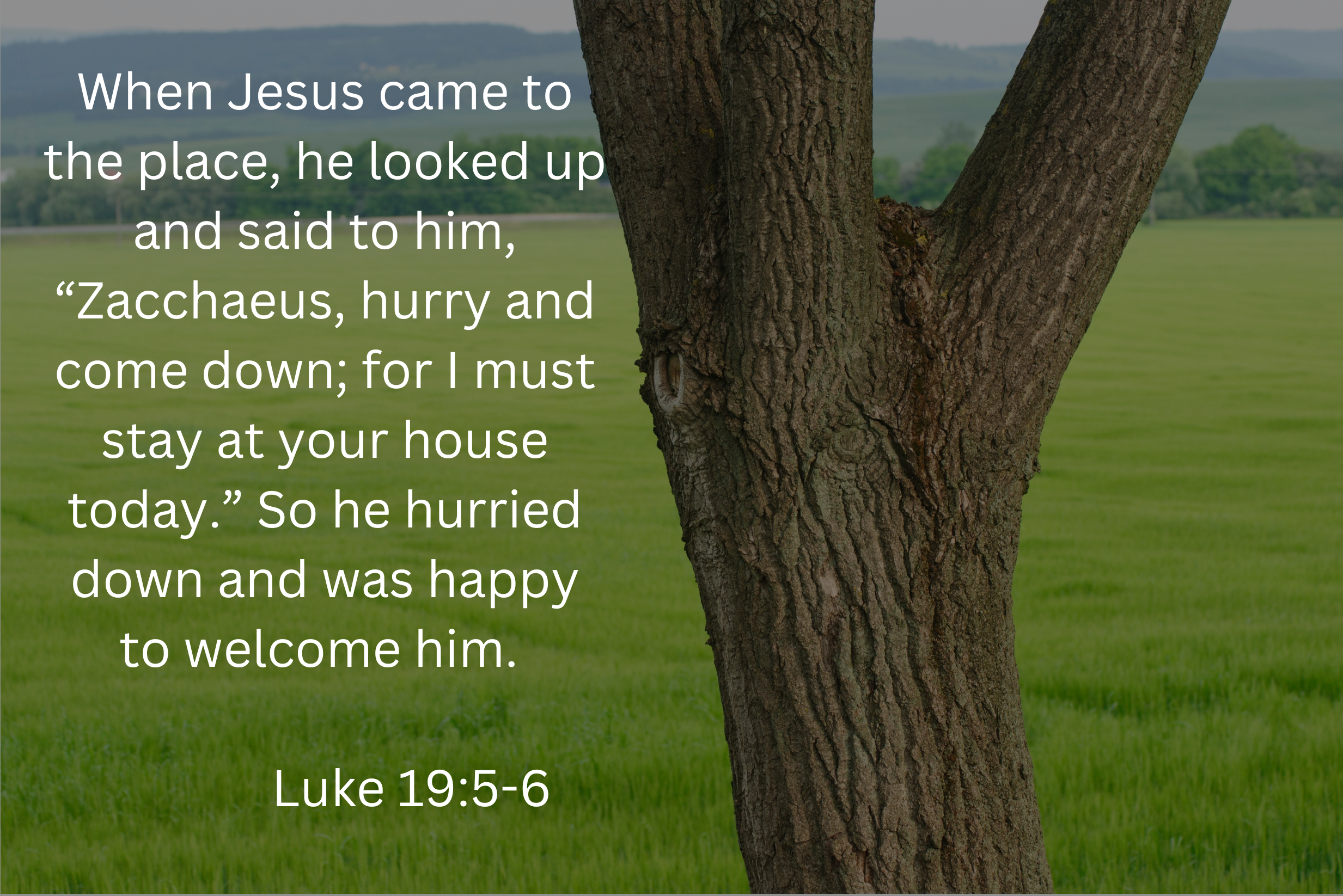 Jesus abandons the system of rewards and punishments we call Law. He seeks out the lost to heal. He does not go to Zacchaeus as a reward, but to show everyone that God aims to redeem even the worst.

DIAGNOSIS: Jesus Got It Wrong

Step 1: Initial Diagnosis (External Problem): Others Get It Wrong

Zacchaeus is a chief tax collector who is rich. He made his wealth by extorting it from other people. How many lives did he destroy? He is not a good person. Calling him a sinner is generous. And yet Jesus, the most perfect person of all, chose to honor Zacchaeus by staying with him. None of the other righteous people, or even those with lesser sins, were chosen by Jesus.

How often in our lives do we see that Jesus screwed it up? These aren’t the poor, down-trodden people who just need a leg up that Jesus is staying with, it’s someone who got rich by stealing from other people. People who are undeserving by our metrics.

Everyone who sees Jesus give attention to Zacchaeus starts grumbling because they’re jealous. Why didn’t Jesus choose them instead? Aren’t they more righteous than this tax collector? If there’s no reward for good behavior, why weren’t they extorting and stealing too? If anything, you get rewarded for it!

We know jealousy is wrong. But does that stop us from feeling it when we see bad people get rewarded for their actions? If we start rewarding everyone who is a sinner, crime will be through the roof. Mug a person in the day, have Jesus over for dinner that night. Jesus’ incentives are all messed up!

The people grumbled, but there is no record of one person calling out Jesus for getting it wrong. Nor is there record of people claiming he was not a prophet because he couldn’t find one holier than Zacchaeus. They know better than to wage open rebellion against God by challenging Jesus. 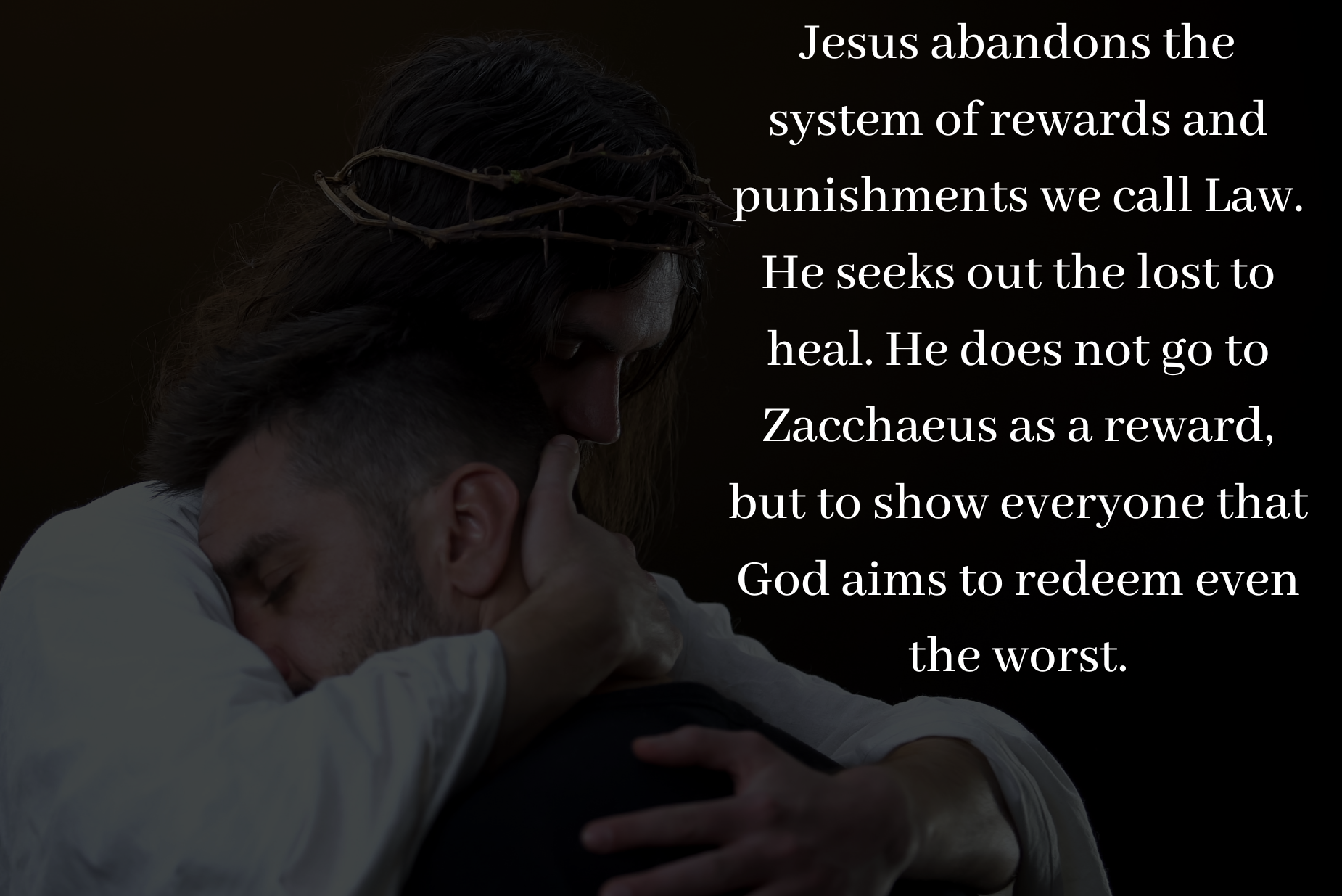 Jesus abandons the system of rewards (from Canva)

PROGNOSIS: Jesus Got It Right

God’s jealousy is so great, that God will seek out and save the lost children of Abraham. Jesus will go to Jerusalem, where his reward for being the most righteous person on earth is crucifixion. He will die.

But God will not let death steal one of his children from him. God is too jealous for that. God raises Jesus from the dead and promises the same mercy for all sinners.

Jesus proclaims that “today salvation has come to this house” (v. 9). Jesus abandons the system of rewards and punishments we call Law. He seeks out the lost to heal. He does not go to Zacchaeus as a reward, but to show everyone that God aims to redeem even the worst.

Jesus’ proclamation aims to change jealousy to celebration. In place of the grumbling, he effects a change of heart in his listeners. Celebrate the win of finding one who was lost! Instead of feeling jealous, we are empowered to go out and witness to the work of Jesus in finding the lost. Even someone as lost as Zacchaeus!

Faith creates a reprioritization in our hearts. It is not following the system of rewards and punishments for behavior, but we are now playing in a much larger game: salvation of souls. In that game, we can celebrate the massive win Jesus pulled off.

Jesus got it right.

Step 6: Final Prognosis (External Solution): Others Get It Right!

The effect of Jesus staying at Zacchaeus’ house is seen in the declaration from Zacchaeus that he will restore the people he wronged and give half of his possessions to the poor. Even if Zacchaeus fails to follow through on his promises, he recognized it is a fitting response to Jesus’ mercy.

Celebrating what Jesus has done lets us lift up the times others get it right. We are freed to celebrate others and help rescue and restore people without relying on the system of rewards and penalties we call Law. Importantly, his actions are outside of the Law—Zacchaeus declares what he will do to try to bring others wholeness. He did not redirect attention to how the Romans (or the Jews) could raise wages for the poor, release prisoners, or otherwise change their system of rewards and penalties. Instead, he works outside the system, and without regard for that system to effect good.