Where the Law Holds No Sway

Some of the Sadducees, who say there is no resurrection, came to Jesus with a question. “Teacher,” they said, “Moses wrote for us that if a man’s brother dies and leaves a wife but no children, the man must marry the widow and raise up offspring for his brother. Now there were seven brothers. The first one married a woman and died childless. The second and then the third married her, and in the same way the seven died, leaving no children. Finally, the woman died too. Now then, at the resurrection whose wife will she be, since the seven were married to her?”
Jesus replied, “The people of this age marry and are given in marriage. But those who are considered worthy of taking part in the age to come and in the resurrection from the dead will neither marry nor be given in marriage, and they can no longer die; for they are like the angels. They are God’s children, since they are children of the resurrection. But in the account of the burning bush, even Moses showed that the dead rise, for he calls the Lord ‘the God of Abraham, and the God of Isaac, and the God of Jacob.’ He is not the God of the dead, but of the living, for to him all are alive.”

The law can only arbitrate the old. It cannot unleash the new.

Resources are dwindling. Prices on food, gas, education, health care and so many other goods are skyrocketing. Lakes and riverbeds are drying out. Wealth is increasingly concentrated in the hands of fewer people. Supply chains are strained. Labor is scarce. Our society’s potential that once seemed limitless has increasingly been ground to a halt in the wake of a pandemic, climate change, and growing international instability. As a result many people express fear of the future and distrust in their leaders and social institutions. When it comes to the future many of us have become Sadducees thinking about the resurrection, expressing doubt that good things can possibly await us.

Our own resources dwindle too. Our money, time, energy, relationships, jobs, abilities to make commitments to ourselves and others are always in limited supply. If we don’t acknowledge this, we learn it at our peril. There’s only so much we can do, and it seems like there is even less that we can give. Some of us try to maintain households and raise children, others attempt to manage finances on a fixed income, many might be caring for an ill loved one, some might even be juggling the responsibilities of a new job or doing two people’s work while waiting for a position to be filled. And how many of us thought that we would learn a new language or instrument and become expert at baking pastries during lockdown only to find our willpower eaten away by our Netflix queue? We start turning toward strategies and methods known as “life hacks” to maximize our efficiency and optimize our outputs. We all talk about a new exercise or tricks or shortcuts that we learn. Life drains us with its demands and limitations. When we face these limits too often we try and stretch ourselves out.

When things are scarce decisions have to be made about how things are to be divided and to whom they go. If necessity is the mother of invention, scarcity is the mother of the law. The law is the referee which arbitrates life’s limitations. The law is not only a temporary remedy for our own sins and limitations but often serves as the real-world way that we deal fairly with finite resources. Both contemporary law and Biblical law deal with how property is fairly distributed and how a person makes restitution after an act of negligence. So much of the law deals with death, loss, and divisions. The domain of the law is the proper amount for a fair wage, the best way to crush your personal goals, or the restitution you are owed when your neighbor’s oxen trample your petunias.

The Sadducees bring up the institution of levirate marriage to Jesus. This institution explicitly deals with the problem of a man dying and the legal need for him to have a legitimate heir for his property and his family to have protection in a patriarchal society. They imagine that life under the resurrection will continue in the same way that life is before the resurrection. For them the resurrected life would merely be a continuation of the life we already had. A longer extension. An extension where human contracts and institutions would continue. A future in which the law would still be summoned as a judge to deal with complexities. They can only think about the future in terms of the law that makes them see new problems to such an extent that they can’t see new possibilities. The law can only arbitrate the old. It cannot unleash the new. 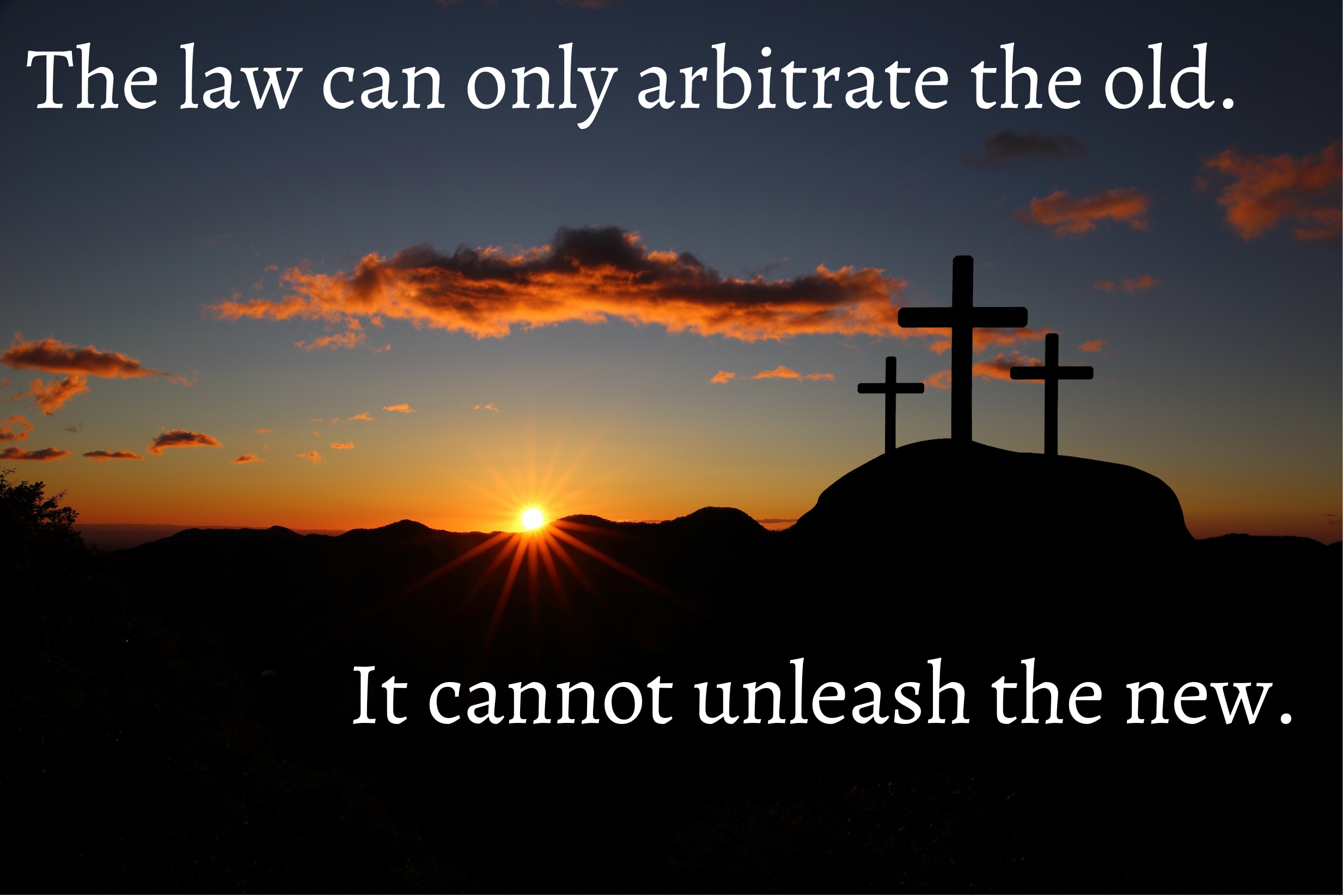 The Limits of the Law (from Canva)

The law is a kind of triage to deal with limited goods and bad situations. But when the disease is cured the medicine is no longer needed. Jesus presents a vision of resurrection that is beyond the legalistic calculus under which marriage contract remains valid. It’s also beyond the horizon of our own modern scientific incredulity that necrotic tissues and organs might be revived. The resurrection for Jesus is a new reality when the daily realities of things like marrying and being given in marriage fade away into a new age. Whose spouse we are does not matter because of whose child we are. Living as children of God we no longer live under death, the ultimate limitation. With the new age comes the abundance of new life – a new life especially beyond the old age where a woman’s value was in whose “property” she was in a patriarchal marriage contract. God is now again the giver and disposer of all things without the limits imposed by death.

The abundance of the resurrection is the new wineskin where the Sadducees foolishly pour the old wine of legal remedies. For this reason, they fail to see the resurrection for what it is: utter good news from one end to the other. Resurrected life is about quality as much as quantity. It’s not more of the same. It is not a continuation of life under our terms. This new life is given to us on God’s terms, in which every need is met, every tear wiped away, and where we live as children fed, clothed, and loved. The law can only administer a just minimum. The resurrection is the promise of God’s living maximum.

God’s gift is a life that empowers us instead of drains us. It comes in a powerful way. We might hear Jesus make an argument by rhetorical sleight of hand when he invokes the story of the burning bush. We might smile at his clever mashing together two verses to make an argument that if God is a living God then God cannot be the God of dead people like Abraham, Isaac, and Jacob. But he tags it with a promise we might miss if we read too fast: “For to him all are living.” We are all alive “in him.” When God becomes our God, we are given life. Gods of fire are not present in ashes. Sun gods aren’t present at night. The living God is not present in dead things. When God is present, we are alive. This happened to Abraham, Isaac, and Jacob through their faith, and even more through God’s faithfulness to them.

Life is no longer something that we possess. It’s not an abstract quality that we have to make the most of, do our best with, and only live once (sorry Drake). God becomes our life by creating us, sustaining us, strengthening us, feeding us with his body and blood, dying for us, and rising with and for us. Everything becomes a gift, freely given, with the eyes of faith eagerly received, and most importantly abundantly shared. God as our life means constant new opportunities, new gifts, and new days. We don’t have to wait until we are dead to experience it. Life in our own hands can only drain us, but life given from God’s hands fills us up. Our cup overflows.

Resurrection shows up most constantly in the lives that we live among others. I experienced that resurrection one day at the congregation I serve, while on my way to vest before church. A young woman from my wife’s youth group came to talk to me. Her life had been pretty difficult at that time, and as she came to talk to me, I knew that she would present me with a difficult story, a request for help, or a conversation I could not appropriately wrap up in the ten minutes I had before worship started. Walking quickly, I told her that I would be available to talk after church. When I returned vested and ready to go to the sanctuary, I saw her surrounded by many of the women of the congregation – patiently listening to her, offering advice, and bestowing on her the gift of presence that I was not able to muster at that moment. An encounter that I allowed to drain me, became an opportunity for my congregation to share mercy and life. My own limits were transcended by the reality that in the body of Christ around me there was a limitless abundance of love.

This is the ultimate promise of the resurrection. We are not only alive to God, but through the good news of resurrection are made alive for one another – bringing gifts and good news to those around us. Communities may not be able to tackle every problem and every issue raised in our troubled world. But when we know that God has conquered and tackled hunger, want, and injustice before us – always promising more, speaking life into dead places and weary hearts – we start carrying that abundance into a scarce world. Fearlessly giving as God gives, we already begin to live anew. We have this promise that in the resurrection all the limitations that we face have a final, irrevocable limit – and the future with God is limitless.