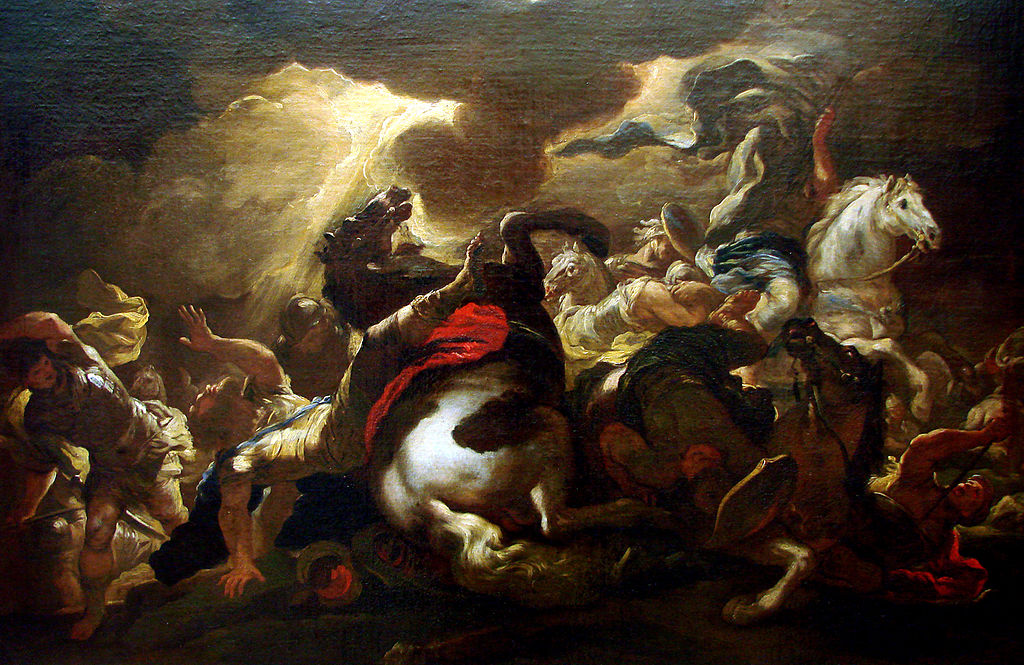 1Meanwhile Saul, still breathing threats and murder against the disciples of the Lord, went to the high priest 2and asked him for letters to the synagogues at Damascus, so that if he found any who belonged to the Way, men or women, he might bring them bound to Jerusalem. 3Now as he was going along and approaching Damascus, suddenly a light from heaven flashed around him. 4He fell to the ground and heard a voice saying to him, “Saul, Saul, why do you persecute me?” 5He asked, “Who are you, Lord?” The reply came, “I am Jesus, whom you are persecuting. 6But get up and enter the city, and you will be told what you are to do.” 7The men who were traveling with him stood speechless because they heard the voice but saw no one. 8Saul got up from the ground, and though his eyes were open, he could see nothing; so they led him by the hand and brought him into Damascus. 9For three days he was without sight, and neither ate nor drank.

10Now there was a disciple in Damascus named Ananias. The Lord said to him in a vision, “Ananias.” He answered, “Here I am, Lord.” 11The Lord said to him, “Get up and go to the street called Straight, and at the house of Judas look for a man of Tarsus named Saul. At this moment he is praying, 12and he has seen in a vision a man named Ananias come in and lay his hands on him so that he might regain his sight.” 13But Ananias answered, “Lord, I have heard from many about this man, how much evil he has done to your saints in Jerusalem; 14and here he has authority from the chief priests to bind all who invoke your name.” 15But the Lord said to him, “Go, for he is an instrument whom I have chosen to bring my name before Gentiles and kings and before the people of Israel; 16I myself will show him how much he must suffer for the sake of my name.” 17So Ananias went and entered the house. He laid his hands on Saul and said, “Brother Saul, the Lord Jesus, who appeared to you on your way here, has sent me so that you may regain your sight and be filled with the Holy Spirit.” 18And immediately something like scales fell from his eyes, and his sight was restored. Then he got up and was baptized, 19and after taking some food, he regained his strength.

For several days he was with the disciples in Damascus, 20and immediately he began to proclaim Jesus in the synagogues, saying, “He is the Son of God.”

The Conversion of Saint Paul, Luca Giordano, 1690, Museum of Fine Arts of Nancy found on Wikipedia

Our pain and the pain we have inflicted on others we bring to the baptismal font. Every act of confession is a return to the font. And there we die with Christ and rise with him forgiven and a new creation.

Saul had the directions to Damascus, but he did not know the Way. Saul was already implicated in the death of Stephen. He breathes threats and murder. He travels to Damascus with an arrest warrant for the followers of the Way. He will bring them in hand cuffs and leg irons back to Jerusalem for trial.

Saul has misplaced his faith. He is on the path of self-righteousness. He discovers that in persecuting the followers of the Way he is persecuting the Son of God, who is Lord also of Psalm 1. 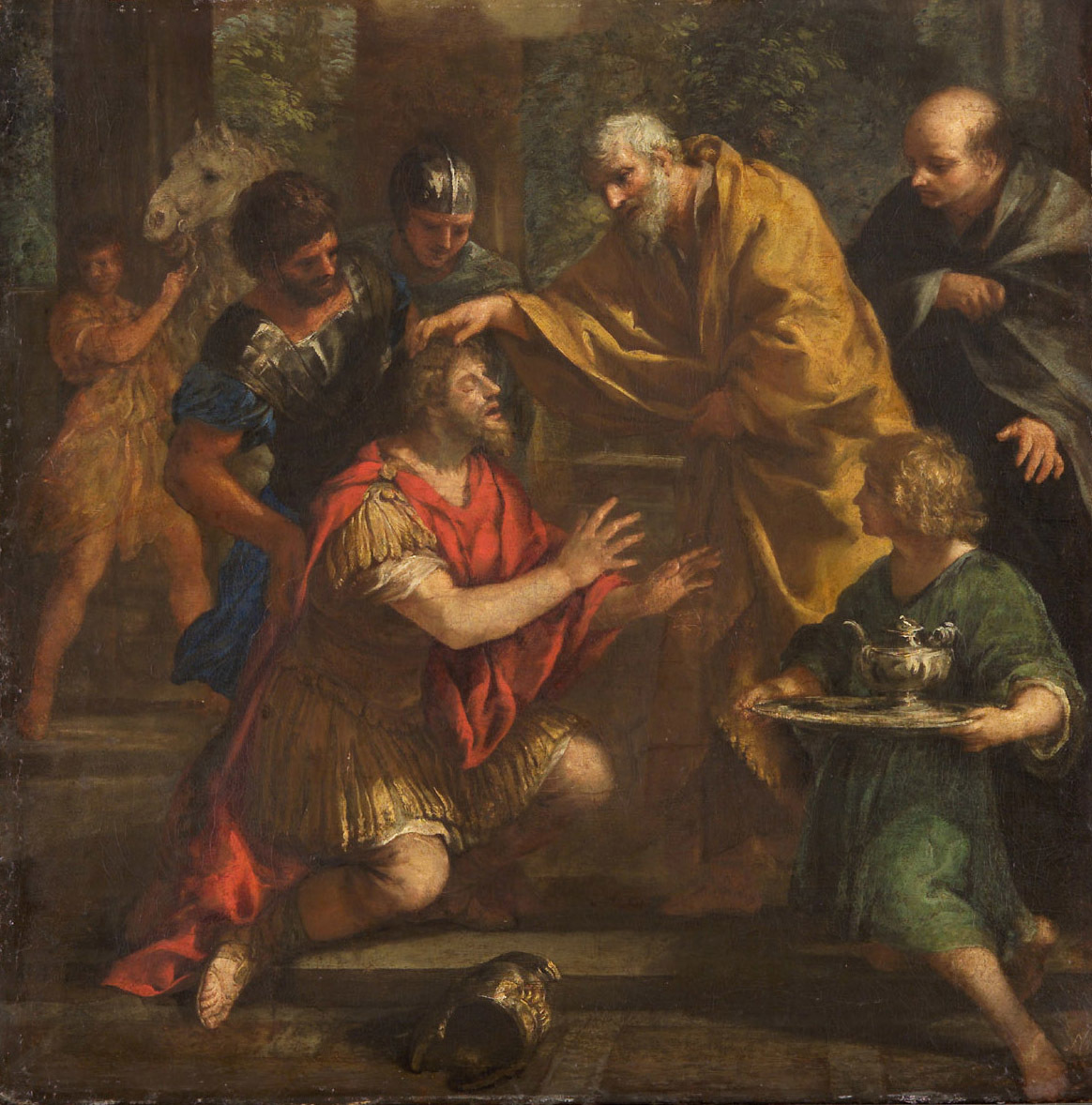 PROGNOSIS: The Way of the Cross

The poet Denise Levertov writes of “wounds that make known in bone and breath God’s agony.”

The church is the body of Christ. Christ is its head. Do we suppose the ascended and still incarnate Christ felt and continues to feel the pain inflicted on his body?

Robert Jenson says the good life is lived in community with God and one another. Sin is whatever breaks up the community. When God raised Jesus from the grave, he restored the unity between God and humankind.

May we then conclude Christ desires to carry this pain, not in some masochistic way, but to take it to the grave and leave it there when he rises? Better yet, he trades his benefits for the pain visited on us and the pain we inflict on others.

Saul suffered death on the way to Damascus. He experienced resurrection when Ananias laid hands on him. And upon rising, Saul was baptized. (The word used for Jesus’ resurrection is used for lesser risings. In my opinion, the fact that the word appears four times in this text is significant, given that there are many other words that could have been chosen.)

In baptism God makes promises to us, which convey to us Christ’s benefits. In a conversation with Chris Repp, he pointed me to the baptismal service in the book of worship. In the preface and on the first page of the rite these promises and benefits are laid out. You will hear more about this from Chris at the January Crossings conference. Chris will lead us into the conference theme, The Promising Community: Can I Get a Witness?

God promises to deliver us from sin, death, and the power of evil. God promises to put our sinful selves to death, to give us new birth, adopt us as children, and make us members of the body of Christ, the church. These promises lead us to growth in faith, love, and obedience to God’s will.

And then there is this: The Lord said of Saul to Ananias, “I myself will show him how much he must suffer for the sake of my name.” Could it be that Saul’s suffering will make known in bone and breath God’s agony?