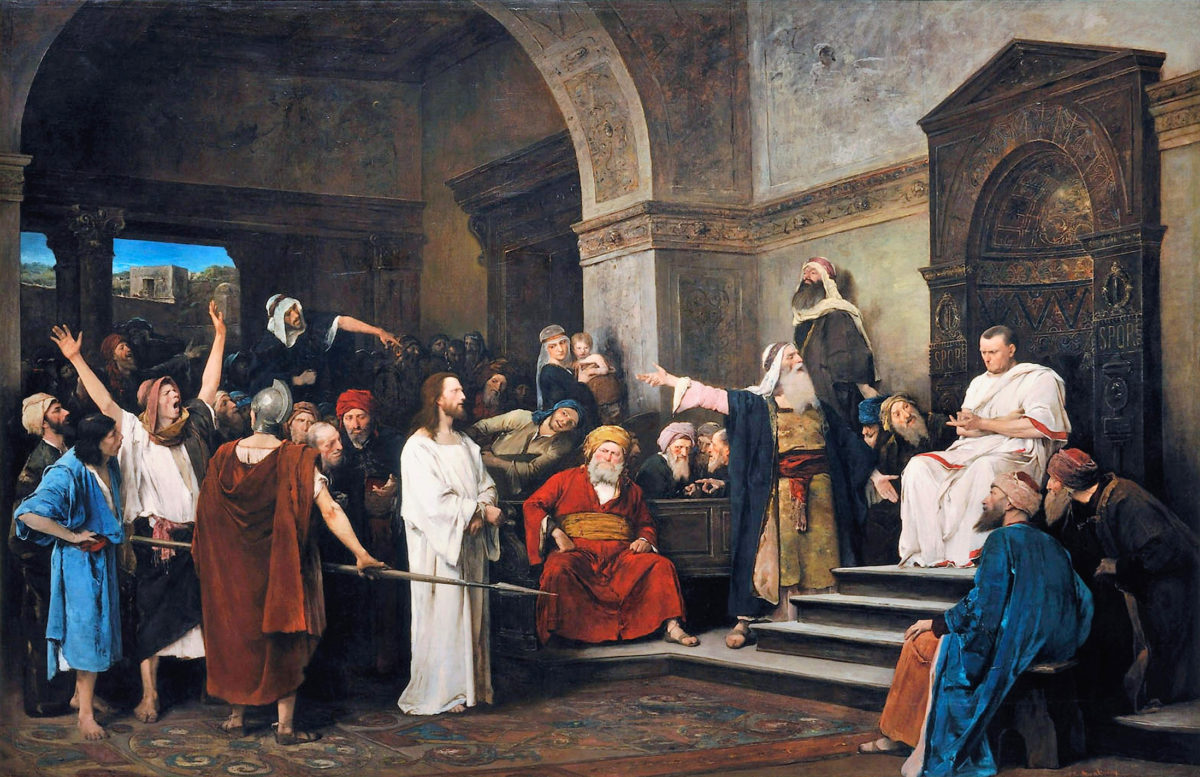 Christ’s (Com)Passion for Liars and Criminals

Luke 23:1-49
Sunday of the Passion
Analysis by Brad Haugen

23 Then the assembly rose as a body and brought Jesus[a] before Pilate. 2 They began to accuse him, saying, “We found this man perverting our nation, forbidding us to pay taxes to the emperor, and saying that he himself is the Messiah, a king.”[b] 3 Then Pilate asked him, “Are you the king of the Jews?” He answered, “You say so.” 4 Then Pilate said to the chief priests and the crowds, “I find no basis for an accusation against this man.” 5 But they were insistent and said, “He stirs up the people by teaching throughout all Judea, from Galilee where he began even to this place.” 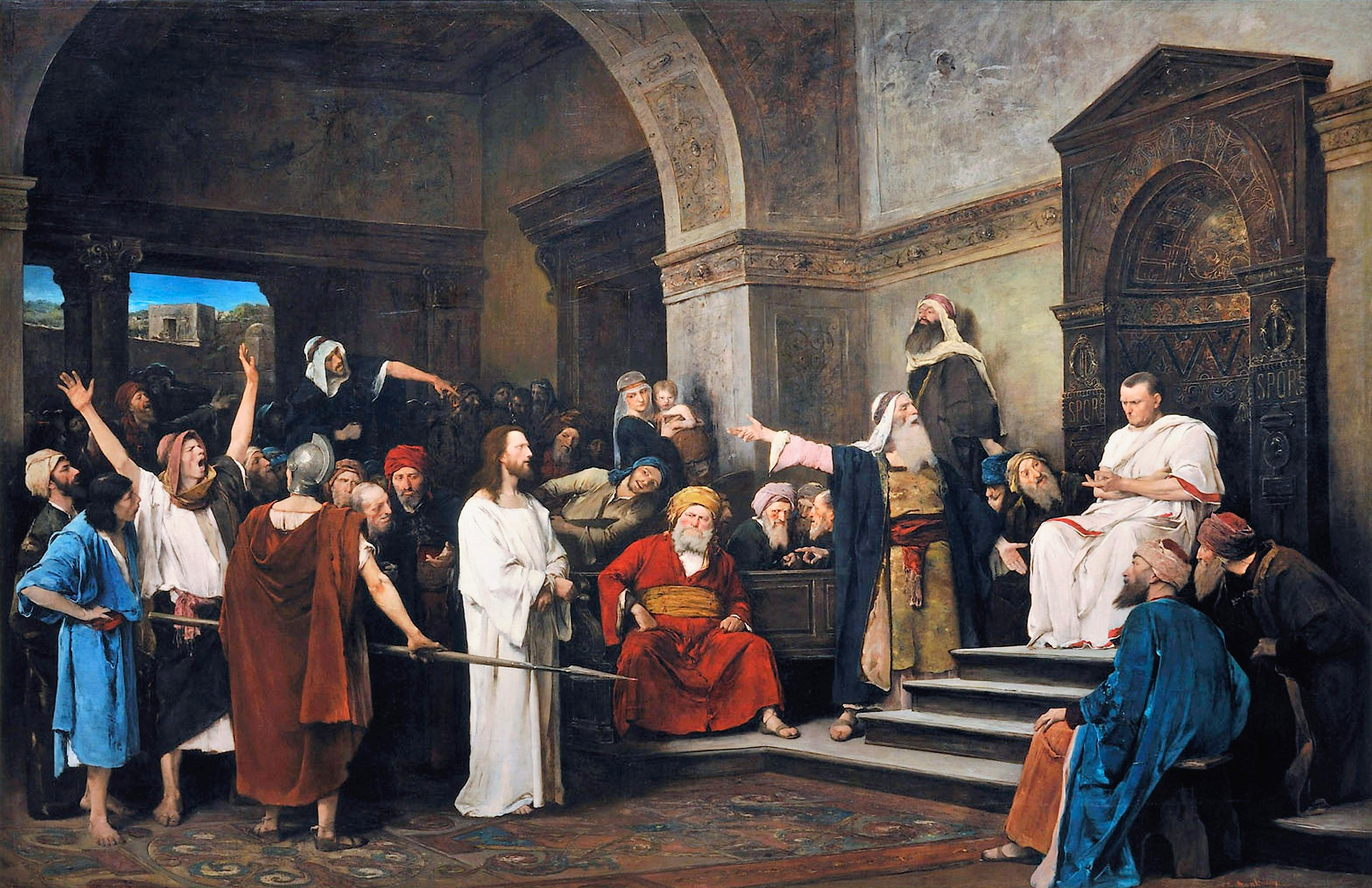 6 When Pilate heard this, he asked whether the man was a Galilean. 7 And when he learned that he was under Herod’s jurisdiction, he sent him off to Herod, who was himself in Jerusalem at that time. 8 When Herod saw Jesus, he was very glad, for he had been wanting to see him for a long time, because he had heard about him and was hoping to see him perform some sign. 9 He questioned him at some length, but Jesus[c] gave him no answer. 10 The chief priests and the scribes stood by, vehemently accusing him. 11 Even Herod with his soldiers treated him with contempt and mocked him; then he put an elegant robe on him, and sent him back to Pilate. 12 That same day Herod and Pilate became friends with each other; before this they had been enemies.

13 Pilate then called together the chief priests, the leaders, and the people, 14 and said to them, “You brought me this man as one who was perverting the people; and here I have examined him in your presence and have not found this man guilty of any of your charges against him. 15 Neither has Herod, for he sent him back to us. Indeed, he has done nothing to deserve death. 16 I will therefore have him flogged and release him.”[d]

18 Then they all shouted out together, “Away with this fellow! Release Barabbas for us!” 19 (This was a man who had been put in prison for an insurrection that had taken place in the city, and for murder.) 20 Pilate, wanting to release Jesus, addressed them again; 21 but they kept shouting, “Crucify, crucify him!” 22 A third time he said to them, “Why, what evil has he done? I have found in him no ground for the sentence of death; I will therefore have him flogged and then release him.” 23 But they kept urgently demanding with loud shouts that he should be crucified; and their voices prevailed. 24 So Pilate gave his verdict that their demand should be granted. 25 He released the man they asked for, the one who had been put in prison for insurrection and murder, and he handed Jesus over as they wished.

The Crucifixion of Jesus

26 As they led him away, they seized a man, Simon of Cyrene, who was coming from the country, and they laid the cross on him, and made him carry it behind Jesus. 27 A great number of the people followed him, and among them were women who were beating their breasts and wailing for him. 28 But Jesus turned to them and said, “Daughters of Jerusalem, do not weep for me, but weep for yourselves and for your children. 29 For the days are surely coming when they will say, ‘Blessed are the barren, and the wombs that never bore, and the breasts that never nursed.’ 30 Then they will begin to say to the mountains, ‘Fall on us’; and to the hills, ‘Cover us.’ 31 For if they do this when the wood is green, what will happen when it is dry?”

32 Two others also, who were criminals, were led away to be put to death with him. 33 When they came to the place that is called The Skull, they crucified Jesus[e] there with the criminals, one on his right and one on his left. [[34 Then Jesus said, “Father, forgive them; for they do not know what they are doing.”]][f] And they cast lots to divide his clothing. 35 And the people stood by, watching; but the leaders scoffed at him, saying, “He saved others; let him save himself if he is the Messiah[g] of God, his chosen one!” 36 The soldiers also mocked him, coming up and offering him sour wine, 37 and saying, “If you are the King of the Jews, save yourself!” 38 There was also an inscription over him,[h] “This is the King of the Jews.”

39 One of the criminals who were hanged there kept deriding[i] him and saying, “Are you not the Messiah?[j] Save yourself and us!” 40 But the other rebuked him, saying, “Do you not fear God, since you are under the same sentence of condemnation? 41 And we indeed have been condemned justly, for we are getting what we deserve for our deeds, but this man has done nothing wrong.” 42 Then he said, “Jesus, remember me when you come into[k] your kingdom.” 43 He replied, “Truly I tell you, today you will be with me in Paradise.”

The Death of Jesus

44 It was now about noon, and darkness came over the whole land[l] until three in the afternoon, 45 while the sun’s light failed;[m] and the curtain of the temple was torn in two. 46 Then Jesus, crying with a loud voice, said, “Father, into your hands I commend my spirit.” Having said this, he breathed his last. 47 When the centurion saw what had taken place, he praised God and said, “Certainly this man was innocent.”[n] 48 And when all the crowds who had gathered there for this spectacle saw what had taken place, they returned home, beating their breasts. 49 But all his acquaintances, including the women who had followed him from Galilee, stood at a distance, watching these things.

DIAGNOSIS: Dead in Our Lies 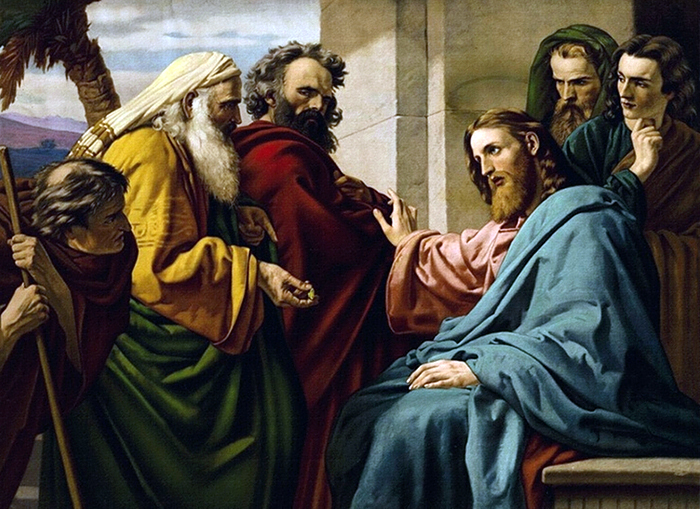 The assembly of the chief priests and scribes accuses Jesus of the following: “We found this man perverting our nation, forbidding us to pay taxes to the emperor, and saying that he himself is the Messiah, a king” (Luke 23:2). To the accusers, it doesn’t matter that Jesus didn’t exactly do those things as reported. They’ve already made up their minds that he is a liar, and they’re willing to leverage even their lies against him to put him in his place. They appeal to the powers that be and pitch their “lesser” lies against what they believe to be his “greater” lies.

Likewise, whether we know it or not, we have already made up our minds about who Jesus is. We stand ready to accuse and resort to lies when he doesn’t conform to our expectations of who he should be.

Step 2: Advanced Diagnosis (Internal Problem): The Truth Is Not in Us

What we fail to realize is that we don’t actually see Jesus as he is. Our judgment is clouded by the belief that he is not a worthy Messiah candidate. Betrayed, arrested, denied, tried and convicted, mocked, beaten, and crucified: this does not describe anyone whom we’d want to be God’s chosen king and Messiah.

After all, our messiah would have given us what we wanted: power, health, and wealth, etc. Like one of the criminals on the cross next to Jesus, we’d ask and demand, “Are you not the Messiah? Save yourself and us!” (Luke 23:39). If we don’t have any evidence in our lives of Jesus “saving” us, then we turn away from him.

It turns out, however, that our view of Jesus is not righteous and truthful, but self-righteous and false. The truth is not in us.

Step 3: Final Diagnosis (Eternal Problem): God and the Truth Are Not on Our Side

The truth has been denied. Barabbas, an actual murderer and enemy of the state, is released rather than Jesus, the innocent one. To those who weep for him, Jesus declares, “Do not weep for me, but weep for yourselves and for your children. For the days are surely coming when they will say, ‘Blessed are the barren, and the wombs that never bore, and the breasts that never nursed’” (Luke 23:28-29). Jesus, here, pronounces a curse rather than a blessing prior to his crucifixion.

Death, on the one hand–or never being born, on the other–is preferable to living in a God-forsaken world where the Messiah is wrongly judged and put to death. According to the Messiah, we are the ones who ought to be weeping for ourselves rather than for him. But God gives us what we ask for; God grants us our lies and our false accusations. Those lies, after all, are what lead to the crucifixion of an innocent man, as well as precipitate our own death and tears. It turns out that we still need saving from our lies, our violence, and our tears, since God and the truth are not on our side. 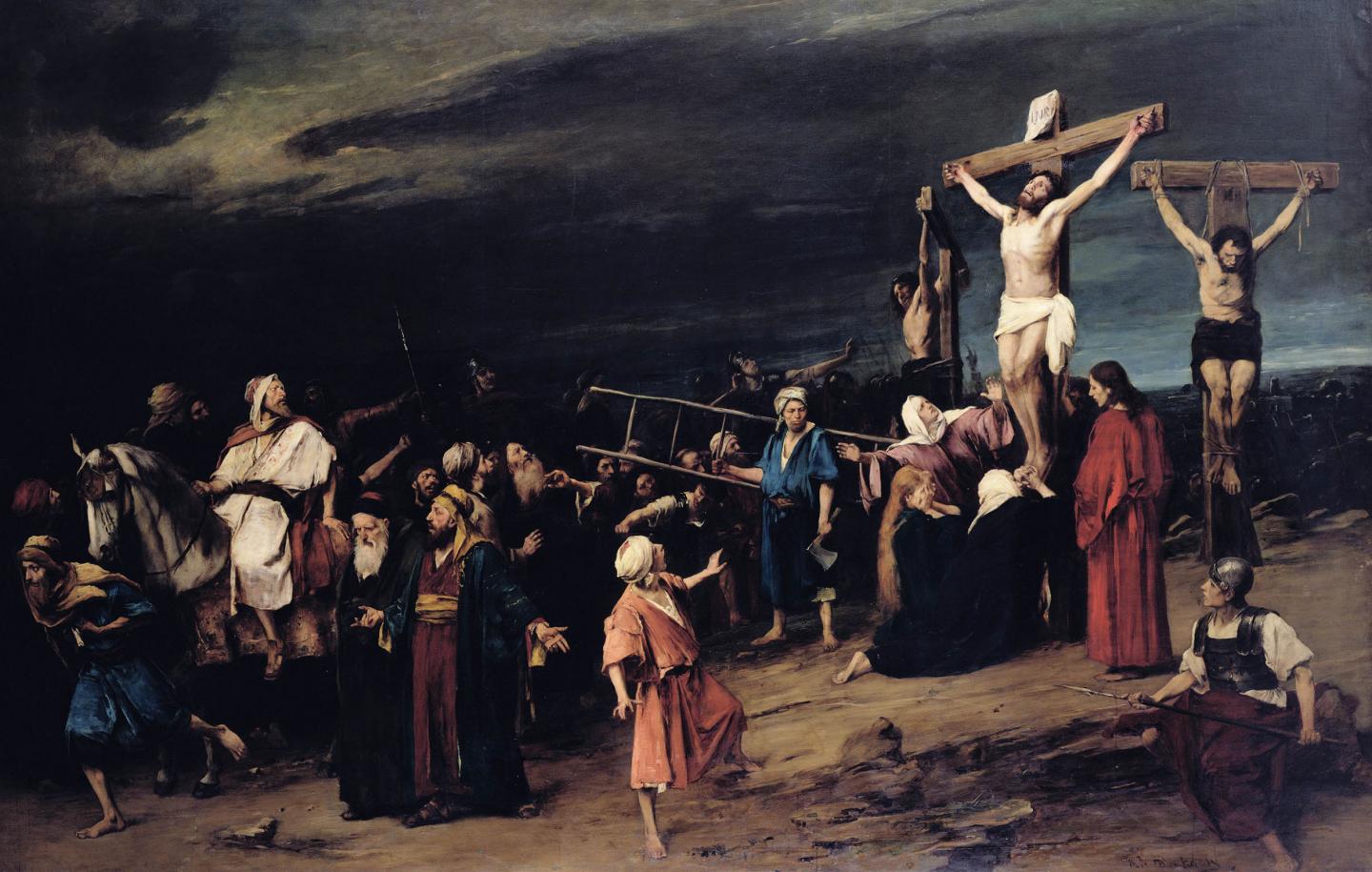 Step 4: Initial Prognosis (Eternal Solution): The Truth Is Spoken from the Cross

Jesus nevertheless speaks as he is being crucified. While God is silent, Jesus is not. He prays to God his Father on behalf of the liars, the murderers, and those with misplaced tears (for him rather than themselves). “Father, forgive them; for they do no know what they are doing” (Luke 23:34), Jesus prays. “Despite their being against us, and despite their not knowing what they are doing, forgive them,” Jesus pleads to God.

There is suddenly a glimmer of truth: one of the criminals hanging next to Jesus confesses Jesus’ innocence and his, (the criminal’s), deserved punishment (Luke 23:41). He prays that Jesus remember him when he comes into his kingdom, to which Jesus responds with the promise that today this criminal will be with him in Paradise (Luke 23:42-43).

When God and the truth are not on our side—and we know not what we do—Jesus prays that his Father forgive us. Then, by the authority of God and his spoken promise of Paradise, Jesus answers the repentant prayers of a crucified criminal, as well as our own. The truth that God forgives sinners is invoked and delivered by Jesus on the cross—despite the lies, the violence, and the tears that made the cross a reality in the first place.

Step 5: Advanced Prognosis (Internal Solution): The Truth Is Given to Us

Despite our unwitting lies and our not knowing what we do—to God and to one another—we believe in the truth that Jesus delivers on the cross. We identify as criminals toward God, criminals for whom Jesus is nevertheless willing to pray. Rather than uttering self-righteous lies and accusations against God and others, we ask the One who prayed on our behalf to remember us in his kingdom. We are given the promise that we shall be with him in Paradise. We trust and rejoice in the promise of everlasting life—this greater truth—that we and the crucified One will share.

The cycle of lies, violence, and tears is mercifully broken in our lives. Our prayers seek the truth of God’s forgiveness, rather than revenge against our enemies. We no longer deny Jesus and his Father’s kingdom to the “undeserving,” or reserve the promise of Paradise for ourselves. As Jesus spoke on behalf of his Father, so now we also speak, on behalf of Jesus, the forgiveness that God promises sinners. We rejoice in the opportunity to share with others this true alternative to the deadly cycle of lies, violence, and tears. We begin to experience Paradise now, forgiving as we have been forgiven.