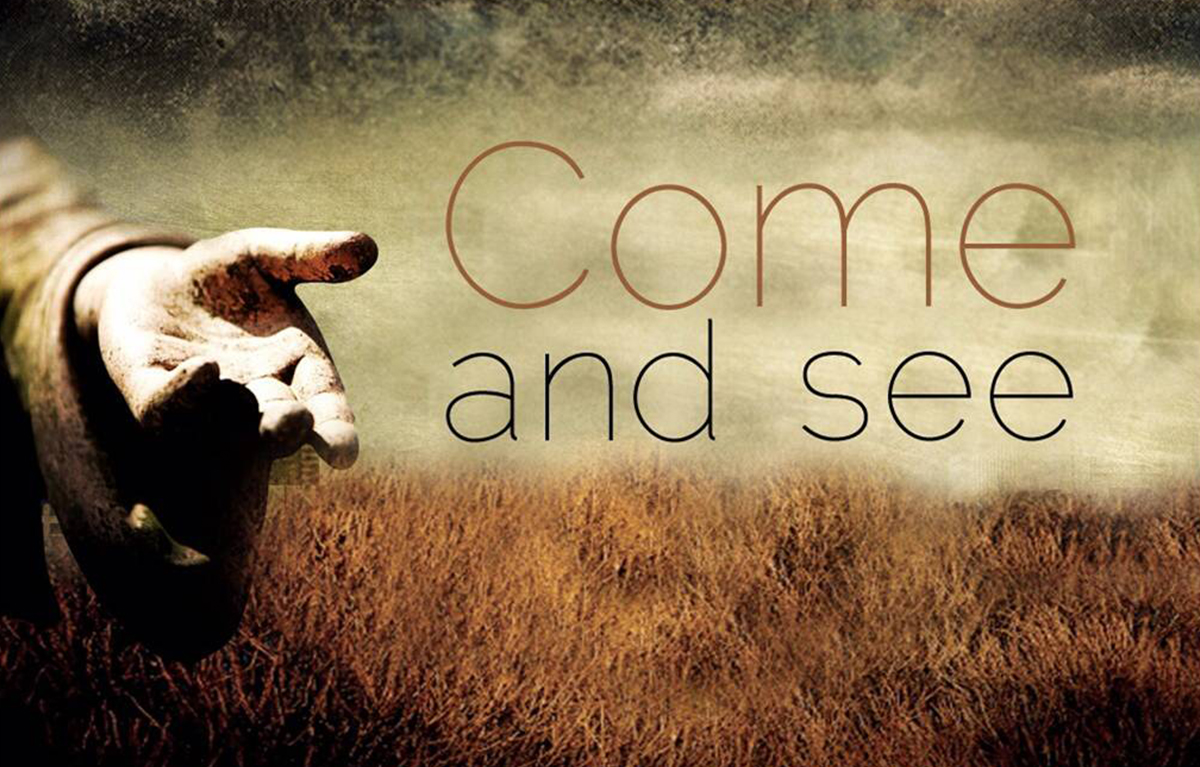 43 The next day Jesus decided to go to Galilee. He found Philip and said to him, ‘Follow me.’ 44Now Philip was from Bethsaida, the city of Andrew and Peter. 45Philip found Nathanael and said to him, ‘We have found him about whom Moses in the law and also the prophets wrote, Jesus son of Joseph from Nazareth.’ 46Nathanael said to him, ‘Can anything good come out of Nazareth?’ Philip said to him, ‘Come and see.’ 47When Jesus saw Nathanael coming towards him, he said of him, ‘Here is truly an Israelite in whom there is no deceit!’ 48Nathanael asked him, ‘Where did you come to know me?’ Jesus answered, ‘I saw you under the fig tree before Philip called you.’ 49Nathanael replied, ‘Rabbi, you are the Son of God! You are the King of Israel!’ 50Jesus answered, ‘Do you believe because I told you that I saw you under the fig tree? You will see greater things than these.’ 51And he said to him, ‘Very truly, I tell you, you will see heaven opened and the angels of God ascending and descending upon the Son of Man.’

Author’s Note: This strange pericope can be exceedingly difficult to program directly. Within the story, Nathanael’s beef with Nazareth is somewhat inscrutable. His heart is somewhat difficult to read as well. However, John’s prologue is filled with Jesus, and people knowing or not knowing each other, and is of great help in dredging the Gospel out of this text.

DIAGNOSIS: The World Did Not Know Him

Step 1: Initial Diagnosis (External Problem): Jesus Is a Stranger to Us

“Can anything good come out of Nazareth?” Nathanael asks (v. 46). Rather than puzzle endlessly why Nathanael has such a beef with Nazareth, note how this illustrates that the world did not know Jesus (vv. 10-11). The Logos, the Word made flesh, is a stranger to Nathanael, and initially, to everyone who hears of him. Philip hits all the high notes. While Nathanael is at least willing to “come and see” (v. 46), Philip’s presentation does nothing else to bridge the gap for him.

An atheist once told me his mother taught him to stay away from strangers. “If someone tells you about Jesus, do not trust them unless I say it is okay.” Jesus is, initially, a stranger to all. This post-Christian age has forced us to admit that we start out not knowing the one through whom the world came into being (v. 11).

Step 2: Advanced Diagnosis (Internal Problem): We Do Not Trust Jesus

Not only did Nathanael not know Jesus, he also did not trust him. Even when Philip—who did trust Jesus—tried to tell him, he did not trust his friend. This is how pervasively the world does not know Jesus: those who do come to know him are alien to their fellow worldlings, a theme that will persist throughout John’s Gospel, especially and most poignantly in chapter 17 when Jesus prays over his disciples. Nathanael and a whole host of unbelievers are in the dark about this stranger, and therefore cautious about the hype surrounding him (from those who testify to the light, v. 7).

It is hard, if not impossible, to warm up to Jesus the stranger—especially if you have had experiences with so-called friends whose Jesus turned out to be less than promised. If you are in the dark, you want to examine this stranger and make your own assessment; you want to be the one shining the light on him. When Jesus is the stranger, skeptics just may look elsewhere or not wish to know him at all, assuming he will never will measure up to their standards.

So, we resolve not to know Jesus and conclude he does not know us. Or we redefine Jesus, making him into someone we wish to know. We domesticate Jesus, and God in his passive wrath (Romans 1:24) leaves us to our own devices. 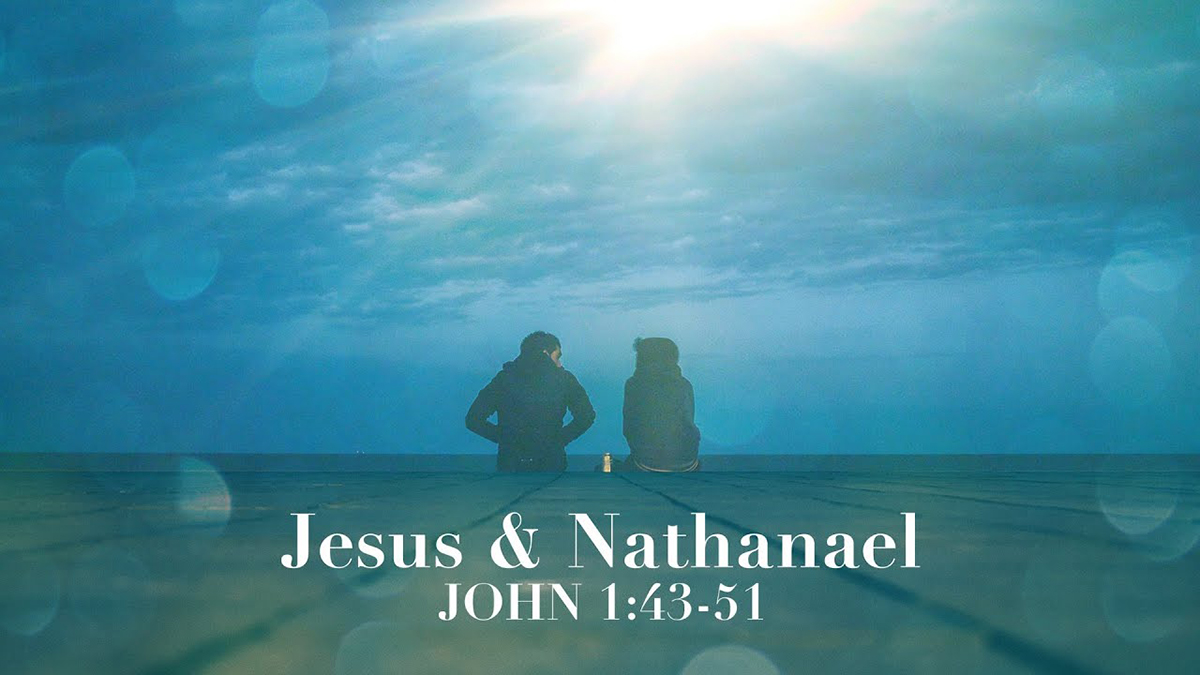 The real Jesus came into the world to shine the light into the darkness (v. 5)—to enlighten everyone (v. 9), including Nathanael. Strangely enough, he does this by commending Nathanael for his scrutiny (v. 47). At first, Nathanael is suspicious—again because Jesus “knew” him without his permission—and he demands Jesus explain himself. In effect, Jesus allows Nathanael to lift him up for public scrutiny, a foretaste of what Jesus later says must happen on the cross (3:14-15) in order that all who believe may have eternal life. Jesus takes Nathanael’s wrath and transforms it into salvation. No wonder Nathanael was blown away (v. 49). Being known by Jesus sparked new life in Nathanael, as it would throughout John’s Gospel.

What if Jesus shows up (usually through a friend), as someone who can take the heat? What if he takes our disdain and gives us grace in exchange? What if that is a foretaste of the glorious exchange of his death on the cross for our eternal life as his precious sibling (20:17)? Wouldn’t that change our hearts?

When Jesus declared Nathanael to be an Israelite in whom he found no deceit (v. 47), he trusted that Nathanael would live into this reputation. Just as Jesus would later trust the almost-stoned woman to “go and sin no more” (8:11), so he trusted that Nathanael’s candor would become a shining light as he continued to follow Jesus. Nathanael thus begins his spiritual journey—learning how to live into this new identity that his king finds in him.

It is freeing to be allowed to grow into the person that someone important already sees you to be. Many teachers may tell you they want you to succeed, but Jesus says, “I see who you are. You just need to see yourself from my perspective.” (Hint: it all began with responding to “come and see.”)

The light that Nathanael once wanted to shine on Jesus, is now in Nathanael. He no longer walks in darkness, but has become a child of God (v. 12). As Jesus later suggests to Nicodemus, Nathanael has been born of God through this encounter. Nathanael can now count himself among those who have seen his glory full of grace and truth (v. 14). He can now join those who testify to the light, reaching out to others who walk in darkness, even as he continues to be enlightened himself. Indeed, he will find himself again with Jesus on that beach after his resurrection, still one of his precious siblings (21:2).

Nathanael is merely the start of a long chain through whom we came to walk in the light. We too can testify to the light by being receptive to the honest, sincere scrutiny of the world around us. For those who ask, “Can anything good from Nazareth?” we can say, “Friend, thanks for your honesty. Let’s talk about that!”