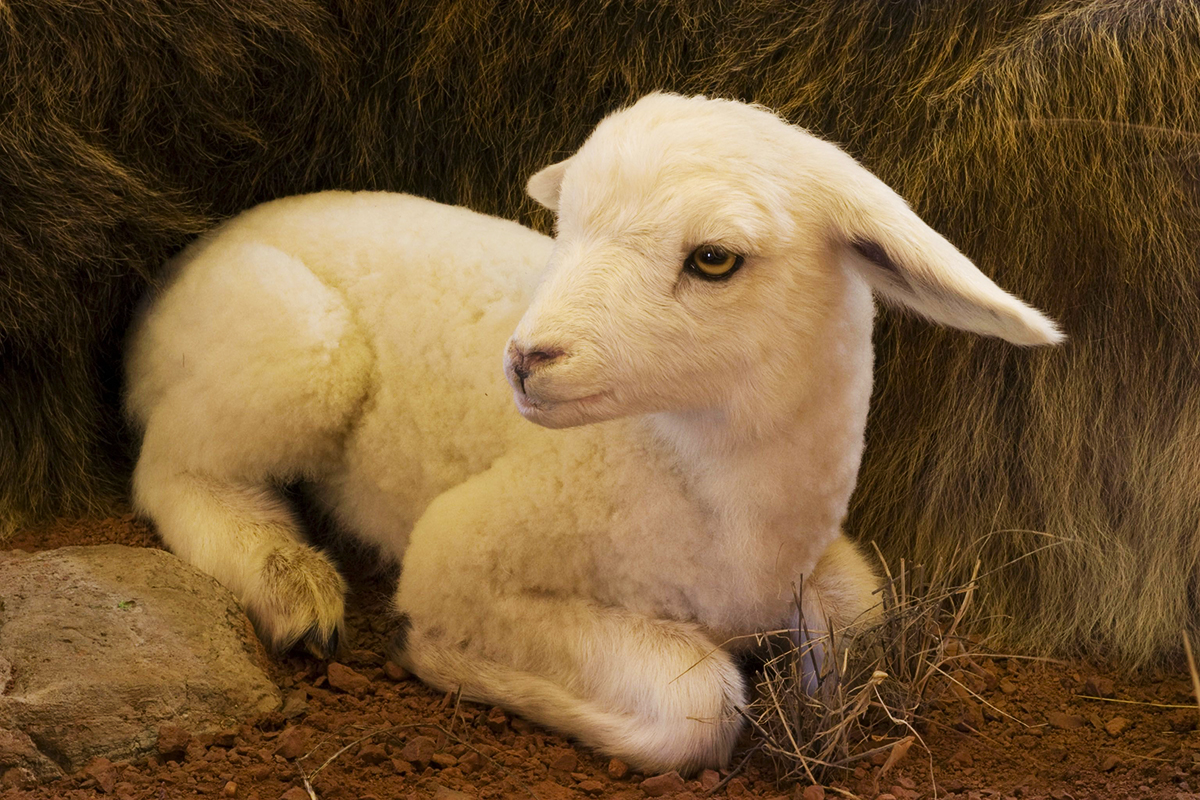 29 The next day he saw Jesus coming toward him and declared, “Here is the Lamb of God who takes away the sin of the world! 30 This is he of whom I said, ‘After me comes a man who ranks ahead of me because he was before me.’ 31 I myself did not know him; but I came baptizing with water for this reason, that he might be revealed to Israel.” 32 And John testified, “I saw the Spirit descending from heaven like a dove, and it remained on him. 33 I myself did not know him, but the one who sent me to baptize with water said to me, ‘He on whom you see the Spirit descend and remain is the one who baptizes with the Holy Spirit.’ 34 And I myself have seen and have testified that this is the Son of God.” 35 The next day John again was standing with two of his disciples, 36 and as he watched Jesus walk by, he exclaimed, “Look, here is the Lamb of God!”
37 The two disciples heard him say this, and they followed Jesus. 38 When Jesus turned and saw them following, he said to them, “What are you looking for?” They said to him, “Rabbi” (which translated means Teacher), “where are you staying?” 39 He said to them, “Come and see.” They came and saw where he was staying, and they remained with him that day. It was about four o’clock in the afternoon. 40 One of the two who heard John speak and followed him was Andrew, Simon Peter’s brother. 41 He first found his brother Simon and said to him, “We have found the Messiah” (which is translated Anointed). 42 He brought Simon to Jesus, who looked at him and said, “You are Simon son of John. You are to be called Cephas” (which is translated Peter).

Author’s Note: John the Baptist is the celebrity in this gospel account. In verses 19-28, we see him draw big crowds and scrutiny from the authorities who wanted to know just who is this person doing all this baptizing. Compared to John, Jesus looks like he should be the supporting cast, but John the celebrity insists that Jesus is the main attraction. Interestingly enough, there may be a method to this madness. In chapter 7 of John’s Gospel, we are told that Jesus told his disciples to go to the festival without him, and then he showed up anyway incognito. The spotlight is always in the wrong place in John’s Gospel, and Jesus not only doesn’t mind, but he even uses it sometimes, though as we see in chapter 6, the impression we get is that he doesn’t know how to use it properly—the great crowds that flock to him largely leave by the end of that chapter. Of course, we’re prone to measure Jesus’ success according to our understanding of good public-relations strategy, and that’s not his key to success at all.

The very next story after this text features Jesus scoffing at the praise Nathanael has for him. The wedding in Cana provides the kind of audience a presidential candidates would kill for, but Jesus’ mom has to nudge him into quietly helping out. Throwing a temper tantrum in the most popular cathedral of his constituency provides bad press. Throughout John’s Gospel, Jesus rejects—with prejudice—any attempt to thrust celebrity on him. In fact, he makes more enemies than friends among people who “matter.” This is the man whom John the Baptist points to. His pointing is an urgent wake-up call, not an opening act for a main event.

Twice John the Baptist says out loud, “I myself did not know him” (vv. 31, 33)—meaning the Lamb of God. He’s the center of attention, but pleads, “You don’t want me, you want him—he’s the one you should listen to, I’m nobody but a simple messenger.” John had been baptizing and this has attracted lots of attention, some of it misguided. His ministry was provocative, apparently. The authorities were easily provoked. He is earnestly telling anyone who will listen that his baptizing is nothing compared to the Lamb of God. He is the unwitting celebrity who captures our gaze despite all his protestations.

It’s a mixed blessing: sometimes, the more someone demurs, the more people shower praise upon them. Sooner or later, others come forward to register their disapproval. The unwanted spotlight can be difficult to shed, because we insist on focusing on the messenger. They are the ones who captivate us—positively and/or negatively.

“We’ll be the judge of who and what you are, John,” say those authorities to this messenger in vv. 19-28. Inevitably, we focus on the flashy messenger in order to scrutinize him or her. Are they worthy of our attention? Do they have the authority to speak to us about sin? These days it happens quite organically and very quickly. Before we realize it, we are demanding the messenger justify him- or herself to us before we take their message to heart, just as the priests and the Levites did (vv. 19-22).

And while the supporters and the opposers fight with each other, the messenger’s message gets lost in the shuffle, because we are all lords of our own lives who will only let messengers in if their message sounds pleasing to us. We decide whether or not anyone is allowed to reveal anything to us (v. 31).

Focusing on the messenger to the exclusion of the message is a neat way of hiding in the darkness from the Light of the World, at least for the time being. It can also mean living in darkness, even becoming one with darkness, which can put us at odds with the Light of the World when the time comes. In effect, the Lamb of God will be revealed, but if we fix our gaze elsewhere, do we receive that revelation? Could we enjoy the removal of sin from our lives, given how easily we inhabit the darkness?

PROGNOSIS: Light of the World 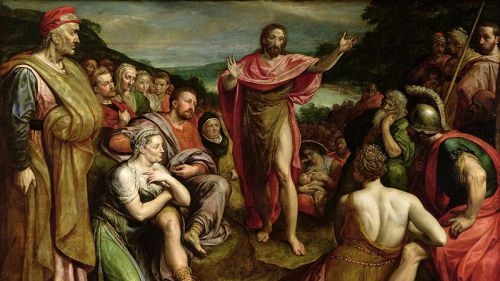 Don’t worry. The Lamb of God will provoke people, too. The disciples of John easily become the followers of Jesus in our text, but by the end of chapter 6, they will be seriously tempted to join the scrutinizers, who deem Jesus too hard to take. The Lamb of God takes away the sin of the world by first shining a light on it—relentlessly and mercilessly, in fact. No sin is safe from his disinfectant. No darkness is left unscathed. Sinners and darkness dwellers—especially those who wield earthly power—are plenty provoked. We don’t see it yet in our text for this Sunday, but it will come in John’s Gospel soon enough. And when they are provoked to action against him, that’s when the sin-taking commences. The Lamb of God is lifted up, like the serpent in the wilderness (3:14), for the benefit of sinners. Sinners commit the ultimate sin by putting him on trial and letting the Roman government put him to death, and the Lamb of God considers that to be: “Mission Accomplished” (19:30). This is how he takes away the sin of the world, by literally taking it from us as if it now belongs to him. In his death, our sin also dies. In his resurrection, our sin stays dead.

And in the glare of the Lamb’s purifying light, the messenger no longer dominates the message, for we can’t take our eyes off the one whose life, death, and resurrection is the message. The Light of the World shines from the cross into our darkness, not with the scorching light of judgment, but the unmistakable light of everlasting love.

There will come a final day of judgment, but in a very real sense that judgment has already happened on that cross and in that empty tomb. Our judgment has already been wrapped up in the judgment the Lamb of God suffered for us. The spotlight is now on us instead of on the messenger, but that spotlight is no longer one of scrutiny, but of healing. We are brought back to life by the one who invites us to come see where he is staying (v. 39; see also 20:17 and 21:15-19 where Jesus performs a kind of spiritual resurrection on his denier, Peter; cf. Walt Wangerin, Jr., The Orphean Passages). With sin no longer ruling our relationship with God, there is no division between us and God. Justification has been accomplished in Jesus’ death and resurrection. In our baptism, we too become justified before God.

Don’t expect the world to accept this new verdict. That will never happen, for as long as this world continues to operate in the dark. And now we find ourselves in John the Baptist’s shoes, pointing to the one who ranks ahead of us because he was before us (1:30). We get to point away from ourselves, confessing that we are not the Messiah (1:20). The tables are now turned: Scrutinizers become the scrutinized. But that puts us in grand company, for Jesus—the Lamb of God—knows that very experience. He stands with us in the person of the Advocate (14:16, 26; 15:26; 16:7)—the Holy Spirit—who guides us into all truth and protects us as his own (chapter 17).

We point to the Lamb of God—the sin-taker—to free others from the darkness. Scrutiny will come our way, just as it did for Jesus. Our sole purpose is to help others to let go of their sin and cling to the sin-taker, because that was his sole purpose. When the world weighs people down with conflict, we show them the love of the Lamb who take away sin and give them eternal life in its place.