33When they came to the place that is called The Skull, they crucified Jesus there with the criminals, one on his right and one on his left. [[ 34Then Jesus said, “Father, forgive them; for they do not know what they are doing.”]] And they cast lots to divide his clothing. 35And the people stood by, watching; but the leaders scoffed at him, saying, “He saved others; let him save himself if he is the Messiah of God, his chosen one!” 36The soldiers also mocked him, coming up and offering him sour wine, 37and saying, “If you are the King of the Jews, save yourself!” 38There was also an inscription over him, “This is the King of the Jews.”

39One of the criminals who were hanged there kept deriding him and saying, “Are you not the Messiah? Save yourself and us!” 40But the other rebuked him, saying, “Do you not fear God, since you are under the same sentence of condemnation? 41And we indeed have been condemned justly, for we are getting what we deserve for our deeds, but this man has done nothing wrong.” 42Then he said, “Jesus, remember me when you come into your kingdom.” 43He replied, “Truly I tell you, today you will be with me in Paradise.” 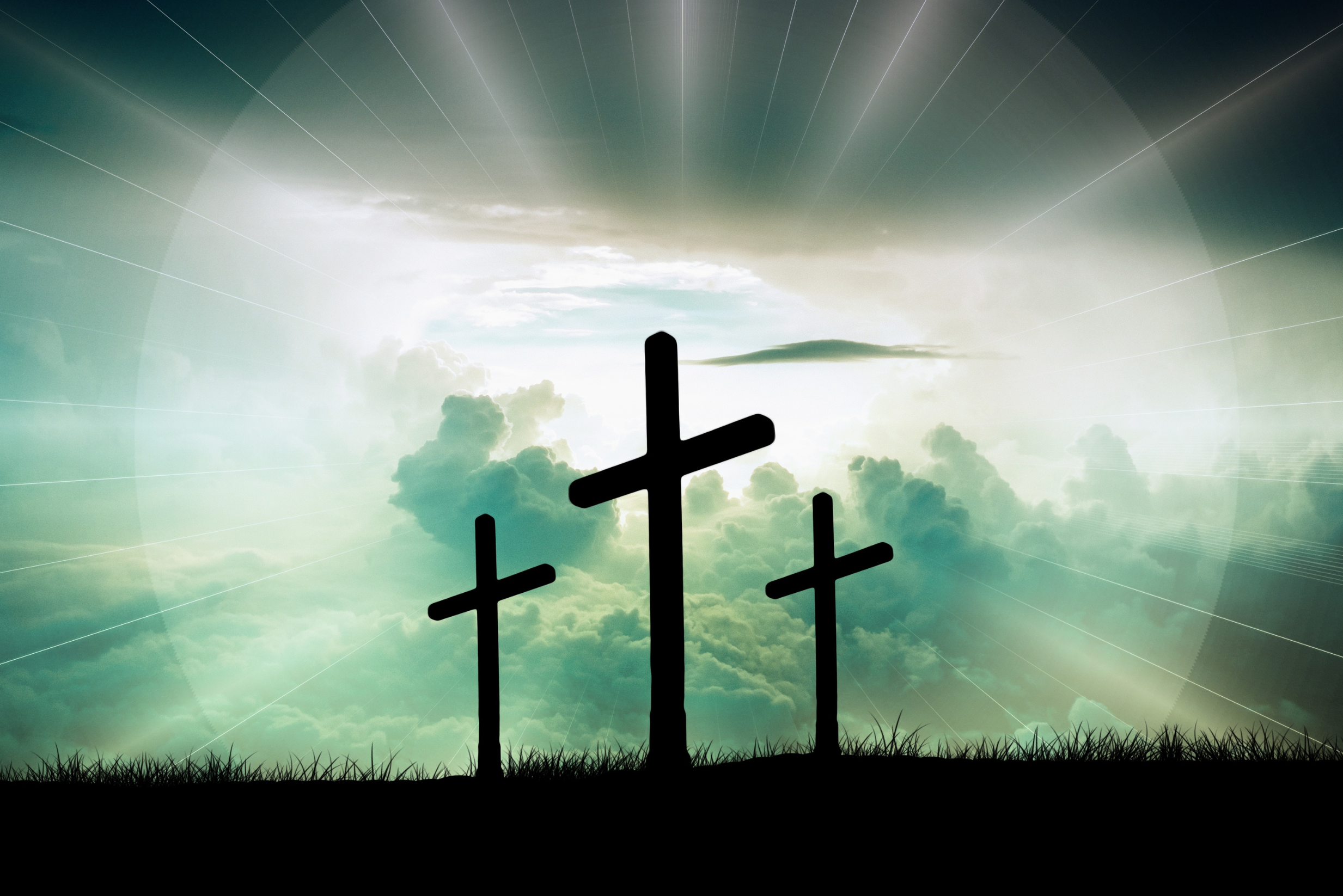 Despite evidence to the contrary, flying in the face of everyone’s expectations, hidden beneath what seems to be anything but royal or godly, Jesus is King.

Step 1: Initial Diagnosis (External Problem): Unexpected
Singer/songwriter Alanis Morrisette in a popular hit from a generation ago sang about experiences in life that turn out to be exactly the opposite of what you would expect them to be. And, while some may argue whether this literary technique is actually paradox or irony, the song is titled “Ironic.”

No one expected Jesus to be a king on a cross. Pilate certainly did not think Jesus was a king. That’s why he placed an ironic inscription over Jesus’ head on the cross, mocking Jesus’ claim to be a king. Jesus was also mocked by the religious leaders, the soldiers, and a thief crucified with him. None of them expected or wanted a king like him. Kings are supposed to be in the business of saving. That’s what kings do. Kings save their subjects, their kingdoms, and most of all themselves. Jesus seemed neither interested nor capable of doing any of these.

That is why we and so many in our world have so much trouble trusting a God who saves by being executed as a criminal on a cross. We do not want a crucified God. We want Superman. Author Robert Farrar Capon puts it well in these memorable words from his book Hunting the Divine Fox:

“The true paradigm of the ordinary American view of Jesus is Superman: ‘Faster than a speeding bullet, more powerful than a locomotive, able to leap tall buildings in a single bound. It’s Superman! Strange visitor from another planet, who came to earth with powers and abilities far beyond those of mortal men, and who, disguised as Clark Kent, mild-mannered reporter for a great metropolitan newspaper, fights a never-ending battle for truth, justice, and the American Way.’

If that isn’t popular Christology, I’ll eat my hat. Jesus–gentle, meek and mild, but with a secret, souped-up, more-than-human insides–bumbles around for thirty-three years, nearly gets himself done in for good by the Kryptonite Kross, but at the last minute, struggles into the phone booth of the Empty Tomb, changes into his Easter suit and with a single bound, leaps back up to the planet Heaven. It’s got it all–including, just so you shouldn’t miss the lesson, kiddies: He never once touches Lois Lane.

You think that’s funny? Don’t laugh. The human race is, was and probably always will be deeply unwilling to accept a human messiah. We don’t want to be saved in our humanity; we want to be fished out of it. We crucified Jesus, not because he was God, but because he blasphemed: He claimed to be God and then failed to come up to our standards for assessing the claim. It’s not that we weren’t looking for the Messiah; it’s just that he wasn’t what we were looking for. Our kind of Messiah would come down from a cross. He would carry a folding phone booth in his back pocket. He wouldn’t do a stupid thing like rising from the dead. He would do a smart thing like never dying.”
We want a Superman because Superman does what we all want to do. We want to be able to assert ourselves, take charge of our lives and win the admiration of our neighbors. We want to be somebody. We often feel obscure and ordinary living our humdrum lives unnoticed and unappreciated, like Clark Kent, nerdy looking, mild mannered newspaper reporter. We dream of being able to jump into a phone booth and emerge as a super-hero able to save ourselves and save the world. We may not dream of being in a Marvel comic book or in a Hollywood blockbuster. But how about a pat on the back or a promotion or a new house in a better neighborhood? We just want to be someone because lurking in corner of our hearts is the fear that we don’t matter, that our lives don’t count and that finally our lives will just disappear into the dustbin of history, ignored and forgotten.

So, what do we do? We try our best to make sure we don’t get nailed to a cross. We work hard at making something of ourselves. If no one else will, we will do our best to SAVE ourselves. We certainly are not going to give our hearts and lives to someone who loses, like criminals who get executed in prison or at Calvary on a cross. But to whom will we give our hearts? Whom can we trust when everyone finally disappoints or betrays us? Those three who hung there on their crosses must have felt like us as we hang there on our crosses similarly betrayed and abandoned . . . by a Superman who was supposed to save us. Should we also add God to that list of betrayers? 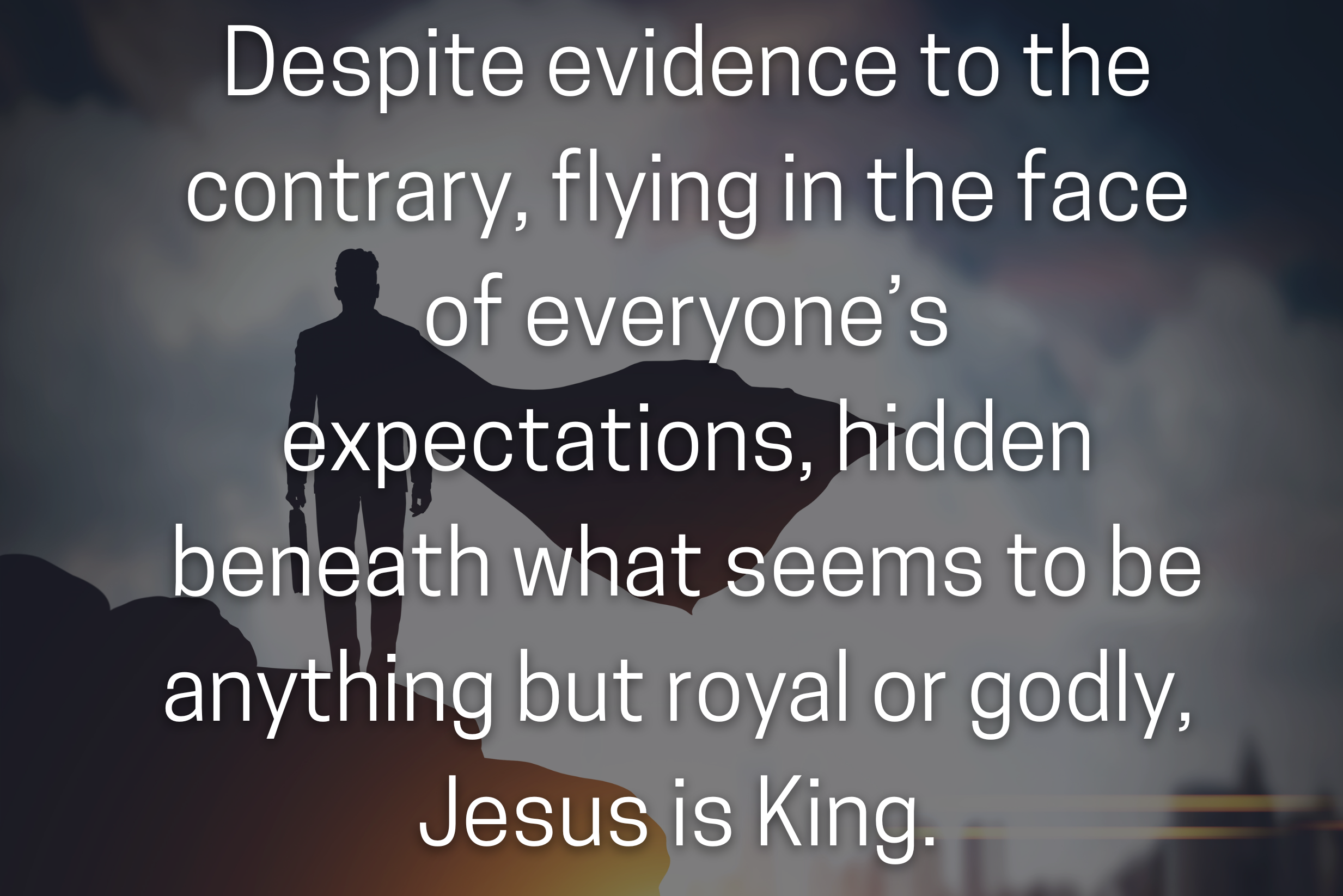 Christ the King (from Canva)

But there hangs Jesus dying on a cross still behaving as if he is a king. Everyone thinks Jesus is a fool except for the second criminal also hanging there on his cross. He dares to believe that Jesus is a king worthy of his trust. He still believes that this king, who rules not with armies and swords but from a cross, can save him. He believes that Jesus can make his life matter and give him the love that he so desperately craves: “Jesus, remember me when you come into your kingdom.”

Jesus ironically answers with a most unexpected promise. Jesus still thinks he is a king, some kind of Superman who can save this criminal and the world by dying: “Truly, I tell you, today you will be with me in Paradise.”

How audacious for Jesus to think that he could give to this criminal what only God could give? Jesus must think he is God or something. But that could not be the case because surely this superman has met his Kryptonite that Friday on the cross.

But the IRONIC truth is that on the cross he IS King. Despite evidence to the contrary, flying in the face of everyone’s expectations, hidden beneath what seems to be anything but royal or godly, Jesus is King. Jesus will have the last word. This is not just another futile and meaningless death carried out by the big, mean Roman machine. This is the triumph of God’s love!

Of course, it would take the resurrection of Jesus three days later to confirm that. However, through the door of the empty tomb we see that it is the truth, the in-spite-of-evidence-to-the-contrary truth! Pilate’s ironic title for Jesus is accurate.

When the evidence against us is piled high, when we realize that we are there with the leaders ridiculing Jesus, with the soldiers mocking Jesus and the criminal deriding Jesus, instead of spitting back to us what we deserve Jesus offers us that incredible promise: “Father, forgive them, for they know not what they are doing.” When we are nailed to our crosses, suffering the consequences of bad choices, misguided arrogance or simply just steam-rolled by the injustices of life, Jesus declares, “Today you will be with me in paradise.”

Hidden on that cross is indeed Christ the King. We believe that he is King even though we never expected it. We were sure we were lost, but we have been found! How ironic!!!

Therefore, when we believe what Jesus says, we “get to” our lives differently. Hidden in the ordinariness of our everyday lives, we “get to” live the ironic life. With honesty and integrity, we can unexpectedly do what is right and not just what is approved by the latest opinion poll. In the midst of an anxiety-ridden world we can live with “the peace that surpasses all human understanding.” We can turn the other cheek and go the extra mile. And most of all, we can actually believe that our dreadful past has been overcome and that our sins are forgiven. No longer ashamed, we can come clean. We can tell the truth because ironically . . . Jesus is King!