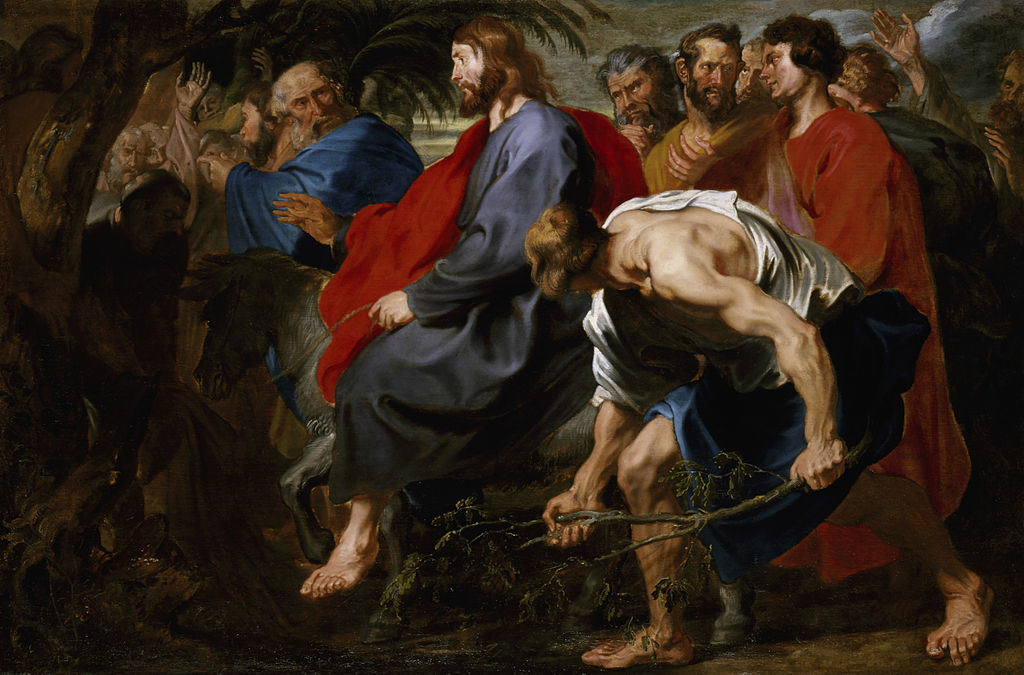 5Let the same mind be in you that was in Christ Jesus,
6who, though he was in the form of God,
did not regard equality with God
as something to be exploited,
7but emptied himself,
taking the form of a slave,
being born in human likeness.
And being found in human form,
8he humbled himself
and became obedient to the point of death —
even death on a cross.
9Therefore God also highly exalted him
and gave him the name
that is above every name,
10so that at the name of Jesus
every knee should bend,
in heaven and on earth and under the earth,
11and every tongue should confess
that Jesus Christ is Lord,
to the glory of God the Father.

Author’s Note: Philippi housed military garrisons and fresh memories of battle at the time of Paul’s writing.  His language in these verses is probably not accidental.  The statement Jesus “did not regard equality with God as something to be exploited” has military connotations.  Something to be exploited is a translation that uses four English words to translate only one word in Greek _harpagmon_. This word relates to another noun meaning “what is seized” especially “plunder or booty” (Theological Dictionary of the New Testament, Volume I, p. 47). You could read _harpagmon _as a “spoil from war seized eagerly.”  Most translations try to capture both aspects of this word which describe both the essence of the object and the greedy and hasty action of the one who seizes the object.  But for our work here, and quite possibly in the ears of the original hearers, we’ll focus on the former aspect of the definition.

“He did not regard equality with God as plunder.”

Spoil and plunder were not tragic accidents in the Roman Empire.  Plunder was a necessity.  The gains from war were how leaders paid their armies, how rich politicians lined their pockets and decked out their villas, and how the client states of a far-flung empire stayed glued to the core of the government.  A vast network of prizes and payouts motivated the wealthy and powerful.  A king or ruler not interested in plunder would have struck many ears as an oxymoron.  On Palm Sunday where anxious and oppressed crowds waved palm branches and exclaimed Jesus as a king preaching this text is an amazing opportunity to proclaim just what kind of king he is.

Entry of Christ into Jerusalem by Anthony Van Dyck from Wikipedia

In the wreckage of our striving, Christ himself becomes carnage, “obedient even to death on a cross.”  We grasp wildly trying to be filled, and Christ empties himself to fill others.

DIAGNOSIS: Spoils in Our Wars

Plunder included more than just land, goods, and treasures.  The Roman economy in large part depended on a steady stream of human capital captured and seized from places of war.  Peoples and tribes became plunder.

We might believe that we live in more enlightened times, but the same reality underlies a good deal of our own economy.  Migrant workers, retail and service earners, industrial workers in the developing world, and even those sold into sexual slavery around the world are made into victims of exploitation in an economic system built on convenience, low-cost goods, and pleasure.  The realities of this might be less stark but no less miserable for those trapped in the silent exchanges and moral trade-offs of these kinds of systems.

Many of us might think about these things and become morally numb.  Or there might be a sense of indifference in us about them.  In the HBO show “Succession,” Logan Roy is the lead character and the head of a media and entertainment empire.  When people are hurt because of any of his corporate or personal decisions he writes them off both on paper and in conversation as “not a real person.”  While this shows his own evil it also explains our own thinking.  These victims are not people that we know and so their suffering only impacts us in an abstract sense.  It seems easier to seize the benefits and prizes that come from the suffering of people that we don’t know.  The world we live in makes it easy for people to become plunder.

To be made into plunder means to be rendered inanimate, or to be at the disposal of people and forces beyond our control.  We feel like plunder when we are at the mercy of something outside ourselves.  This fear drives us to grab after many things in life.  We seek advantages that give us a sense of control.  If we can climb the economic ladder through a good education and a good job, we’ll have resources and choices.  We equate security with status.  A few years ago, many were shocked when news broke that a group of wealthy and famous people had paid a fixer to game the college admissions system.  But this was an extreme example of a long cultural push to assure one’s children of elite status.  The perceived choice is between climbing the rungs of a massive invisible ladder or becoming plunder at the bottom.

Divinity is the attribute that we might expect to be at the top of the ladder we are climbing.  We might talk about working out to get that “god-like” body, partake in punishing diets and treatments to extend our lives, or refer to our talents (with only slight exaggeration) as “super-powers.” Divinity and suffering are treated as opposites.  So we grasp at divinity to ward off suffering.  The things we strive after (seek to “seize”: _harpagmon_) we grab as our gods.  Money, health, and high status among other things are prizes that we hope to possess.  If we get a little piece of divinity under our control, we hope to banish or at the very least diminish suffering. 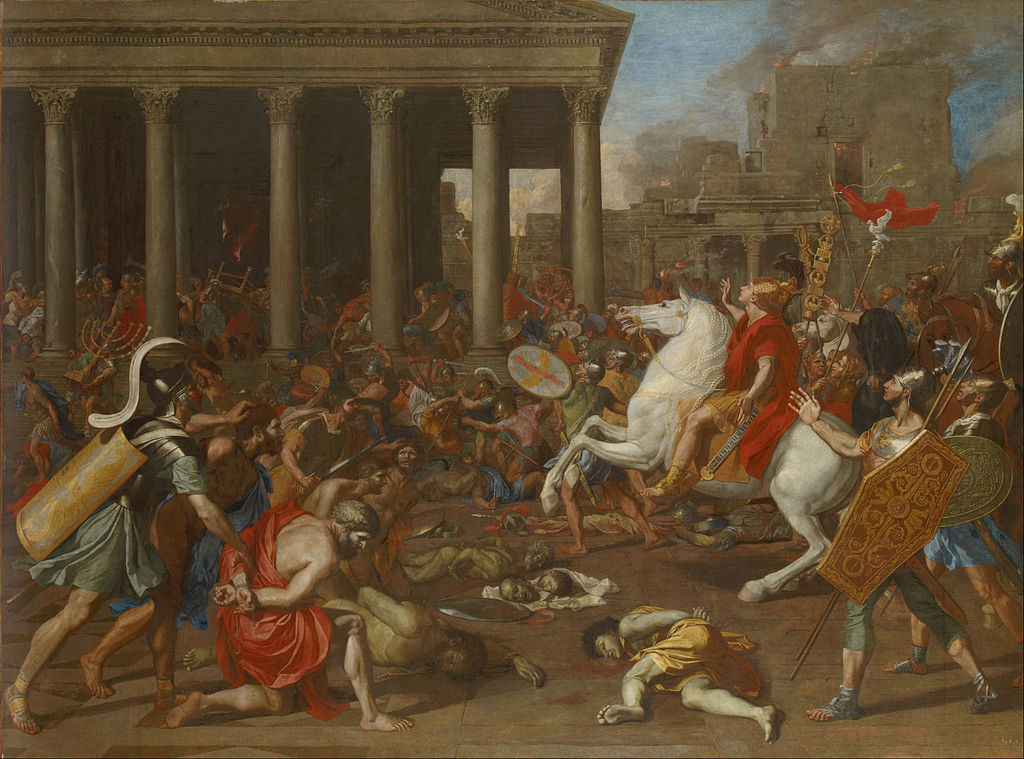 Conquest of Jerusalem by Emperor Titus by Nicolas Poussin from Wikipedia

We grab for what was never meant to be in our control and turn others into a means to our own ends.  In contrast, Christ lets go of what he already has in abundance so that he might fully take the “form of a slave” to serve us.   In the wreckage of our striving, Christ himself becomes carnage, “obedient even to death on a cross.”  We grasp wildly trying to be filled, and Christ empties himself to fill others.    While we are grabbing for divinity, Christ places himself fully in our hands.  We seek plunder while Christ becomes plunder for our sake.

The good news for us is that while we are reaching for little bits of divinity that we can incorporate into our lives, the one who is actually divine gives up his divinity for our sake.  We search for a kingdom above us, but the true king descends from his throne.  Buried in our failures we expect to be god-forsaken, but this divine One joins us in our tomb.

The Dominican writer Simon Tugwell put it this way: “If we keep clamoring for things we want from God we might find ourselves disappointed, because we have forgotten the weakness of God and what we might call the poverty of God.  We had thought of God as the dispenser of all good things we would possibly desire; but in a very real sense, God has nothing at all to give at all except himself.”

And God gives himself to us completely.  Prior to our striving and in the midst of our suffering Christ is there—not as the one we would grab for, but as the one crucified and broken who grasps us.

There are three active verbs in verses 6-8.  “He did not regard,” “he emptied himself,” “he humbled himself.”  Each of these presents a progression opposite the ladder we climb.  We so often exalt ourselves and buck ourselves up, and then we acquire for ourselves, and then we regard ourselves as something special and hope that others will too.  Christ reverses the ladder and climbs down, not regarding his status, shredding all his endowments, and then taking the lowliest form he can in slavery and death.  He is undoing what we do to ourselves and to one another.  At every place where there is exploitation, pain, estrangement, and remorse Christ there gives full forgiveness and life.  Christ comes to lead us down the endless ladders we climb, and when we crash to the bottom he is there to catch us. Christ becomes not a prize we win by our best efforts, but a gift given to us in every defeat—the plunder in a battle we lose.

Paul gives us two contrasting “forms” where Christ might be found.  The form of a God and the form of a slave.  We are no different from the crowds on that Palm Sunday who parade and shout hoping to find Christ in the form of a God but encounter him (and reject him) in the form of a slave.  Striving to find Christ in the form of God will always cause us to run the risk of casting God in our own image.  It will also keep us from discovering Christ where he appears and appeals to us most constantly, in the form of our neighbors.  The same neighbors that we tried to flee on our own quest for status, or ignored in our indifference, now become those in whom Christ is revealed—by them in their need, and by us in our service.  Christ emptied himself, humiliated himself, so that he might become a “real person” among us, not just another god above us.