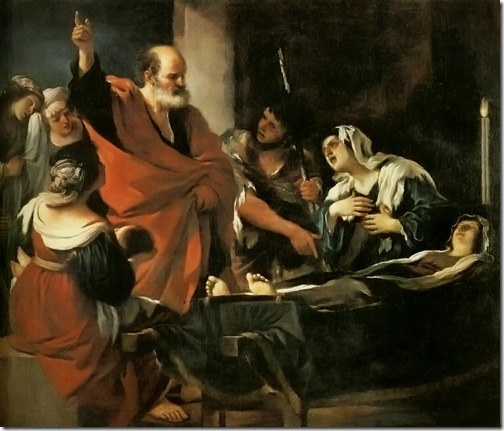 36 Now in Joppa there was a disciple whose name was Tabitha, which in Greek is Dorcas. She was devoted to good works and acts of charity.  37 At that time she became ill and died. When they had washed her, they laid her in a room upstairs.

38 Since Lydda was near Joppa, the disciples, who heard that Peter was there, sent two men to him with the request, “Please come to us without delay.”  39 So Peter got up and went with them; and when he arrived, they took him to the room upstairs. All the widows stood beside him, weeping and showing tunics and other clothing that Dorcas had made while she was with them.  40 Peter put all of them outside, and then he knelt down and prayed. He turned to the body and said, “Tabitha, get up.” Then she opened her eyes, and seeing Peter, she sat up.  41 He gave her his hand and helped her up. Then calling the saints and widows, he showed her to be alive.

42 This became known throughout Joppa, and many believed in the Lord.  43 Meanwhile he stayed in Joppa for some time with a certain Simon, a tanner.

Fortunately, Tabitha’s distraught friends in Joppa knew someone who hadn’t forgotten his lines, though he was surely capable of blowing lines—big-time. Peter was nearby…Peter had learned one of Jesus’ lines: “Get up.” In Tabitha’s death chamber, he used it. Tabitha sat up. She lived.

DIAGNOSIS: Dying for a New Wardrobe

Sometimes it isn’t merely a friend or loved one who dies, but a dear soul who has personified among us all that we believe, hope, and strive to be ourselves as caring, hospitable members of Christ’s body. When our Tabitha, our Dorcas, our own bright-eyed, energetic gazelle of a friend, she who has not only chased after us as the embodiment of God’s faithful sheepdogs Goodness and Mercy (cf. Acts 9:36; Ps. 23:6), but who has also fashioned garments for us to keep us warm, cover our loneliness, and hide our shame, we weep inconsolably. Our hearts and spirits sink.

We step into a wilderness, a wordless void where at best we hear only each other’s sobbing, at worst a stream of trite clichés and empty theologizing. The very hand that held our own every other time the wilderness opened to swallow us has gone limp and cold. We grasp frantically for the promises that have previously sustained us, but this time it seems not only our loved one has perished, we ourselves have been snatched from the hand that swore never to let us go (John 10:28). We lie naked and alone in dust and ashes.

Being dead to the world while still breathing is worse, or at least more troublesome, than being dead, period. In the absence of flesh and blood embodiments of God’s grace, mercy, slowness to anger, steadfast love, and untiring forgiveness, the world sinks into hellish din and darkness. (This happens, by the way, not merely when the baptized sink into dispirited despair, but also when they succumb to the frustrated faithlessness of Damn-You-Too-ing aimed at the culture and a world full of “enemies.”) Moreover, sadly, Tabitha’s precious gifts go to waste. All those garments she made have warmed us and hid our nakedness to be sure, but a new one also clothed each one of us on the day we were baptize into the family, into the body of Christ crucified and risen, and hence, those became also our choir robes, the ones we have worn and washed daily all through the “tribulations,” the universe’s continual efforts to grind us down, rub us out and into dust (Rev. 7:13-17). Without constant rehearsal, we choir members forget our lines, and when we ignore our robes and forget our lines, the stakes are eschatological. When the music stops, earth suffers to be sure, but even heaven holds its breath. 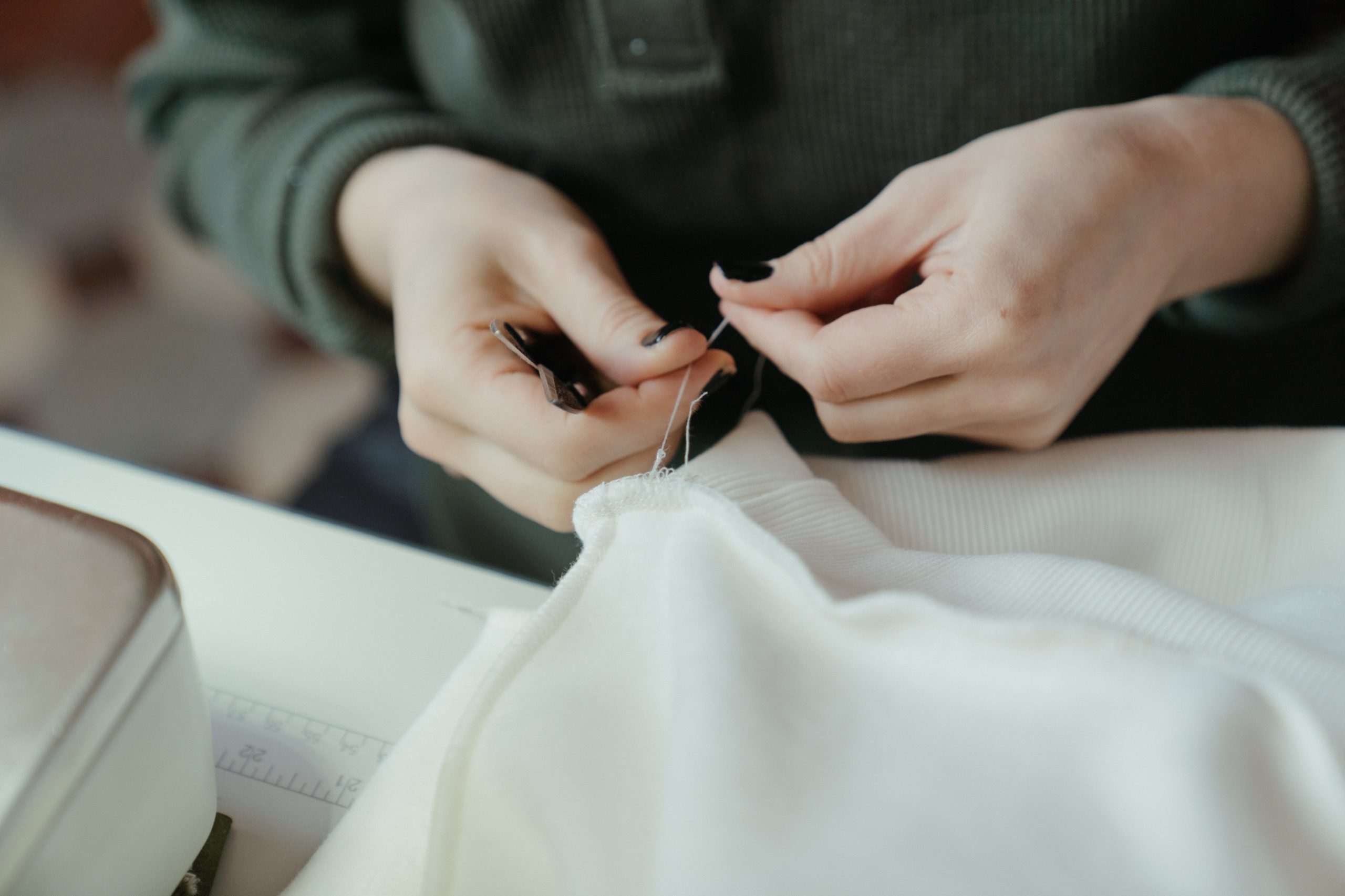 Photo by cottonbro  found on Pexels

Fortunately, Tabitha’s distraught friends in Joppa knew someone who hadn’t forgotten his lines, though he was surely capable of blowing lines—big-time. Peter was nearby, only a couple hours away in Lydda, and he’d been through a day just like this back when Jairus’ little daughter died (Luke 8:40-56). The family called Jesus, and he took Peter, James, and John, entered the room where the body lay, and spoke to her: “Get up,” Jesus said. And she did. On his own way to dying in Jerusalem, Jesus had paused to call back the spirit of a dead child and returned it. She lived, and while we don’t know what else she did with her life beyond eating what Jesus directed her family to get for her in that moment, Peter had learned one of Jesus’ lines. In Tabitha’s death chamber, he used it. Tabitha sat up. She lived.

As with Jairus’ daughter’s ongoing story, we’ve no idea what exactly Tabitha did with her newly risen life, although it’s hard to imagine she didn’t go back to making baptismal garments for Joppa’s entries in the white-robed, palm-waving choir that raises gooseflesh through heaven and earth in Revelation 7. We do know, however, that her widow friends and plenty of others believed in the Lord and told their stories—the one about their own being raised from the dead even as they witnessed their friend’s new life. Thus, did they all dress themselves and each other in Jesus Christ, crucified and raised, daily, even hourly, as together they trekked on through the world that daily sought to grind them down again to ashes, despair, and silence. Through it all, they also kept on singing, rehearsing their sweetest, promise-trusting, glorious, eternal lines. And so do we.

Something important about our respective vocations as part of the host that includes Tabitha and Peter appears in the last verse of this brief narrative. Instead of returning to Lydda, Peter “stayed in Joppa for a time with a certain Simon, a tanner.” No one stays with a tanner, at least not if there are other choices. Tanners spend their days with unclean things—the bodies of dead animals. They use chemicals that smell beyond awful, and you cannot get that smell off your hands. Jewish law declared tanning an “unclean” occupation, and among the very short list of reasons Jewish law allowed a wife to divorce a husband was if she had married a tanner thinking she could tolerate the smell, but eventually learned she could not. And now, Peter goes to stay with a tanner. The smelliest place in town. The place no one else would be caught dead. Sort of like Jesus in the tombs with the Gerasene demoniac on the way to the home where he said, “Tabitha, get up.” Or, think back to the beginning of human cussedness and death’s reign among us. That story included a tanner, too—God, who made garments of skin for the naked, cunning pair who had exposed themselves and hid among the trees. From the get-go, God took the smell of death upon God’s self. Content, for our sakes, to live outside the city limits, ready always to cover our shame and nakedness, God invites us into the shop, into the hide-and-seek forgiveness business. That’s who we are—sinners, an unclean company of smelly tanners, clothing each other in goodness, mercy, and love. And singing all the while we sew.