More Than a Fish Story

1Once while Jesus was standing beside the lake of Gennesaret, and the crowd was pressing in on him to hear the word of God, 2he saw two boats there at the shore of the lake; the fishermen had gone out of them and were washing their nets. 3He got into one of the boats, the one belonging to Simon, and asked him to put out a little way from the shore. Then he sat down and taught the crowds from the boat. 4When he had finished speaking, he said to Simon, “Put out into the deep water and let down your nets for a catch.” 5Simon answered, “Master, we have worked all night long but have caught nothing. Yet if you say so, I will let down the nets.” 6When they had done this, they caught so many fish that their nets were beginning to break. 7So they signaled their partners in the other boat to come and help them. And they came and filled both boats, so that they began to sink. 8But when Simon Peter saw it, he fell down at Jesus’ knees, saying, “Go away from me, Lord, for I am a sinful man!” 9For he and all who were with him were amazed at the catch of fish that they had taken; 10and so also were James and John, sons of Zebedee, who were partners with Simon. Then Jesus said to Simon, “Do not be afraid; from now on you will be catching people.” 11When they had brought their boats to shore, they left everything and followed him.

We witness the power of God stooping all the way into the grave to bury death’s power over us.

After the wilderness temptation, Jesus traveled the region, teaching in their synagogues, casting out demons, and healing all manner of diseases. We witness the clash of regimes: One smothers God’s good creation. The other nurtures life.

Step 2: Advanced Diagnosis (Internal Problem): What I Would Have Been Thinking

When Jesus told Simon to put out into deep water and let down his nets for a catch, Simon only stated the obvious. “Master, we have worked all night long but have caught nothing.” Who can fault Simon for that?

I can say what would have been on my mind and in my heart as one of those fishermen. If Jesus had directed the request to me, I would have been thinking, “We are dead tired. All night we threw out nets and hauled in nets. We just finished cleaning our nets and now we will have to clean them again. And for what? We caught nothing during the night when fish school and feed. We will catch nothing this morning under the hot sun. We are fishermen. What do you know about fishing?”

They are about to find out.

The marvelous catch of fish is about more than fish. Faced with God’s generosity, goodness, power, and glory, Simon is simultaneously confronted with his own sinfulness. He can only fall to his knees and beg Jesus to depart from him. He is not worthy. 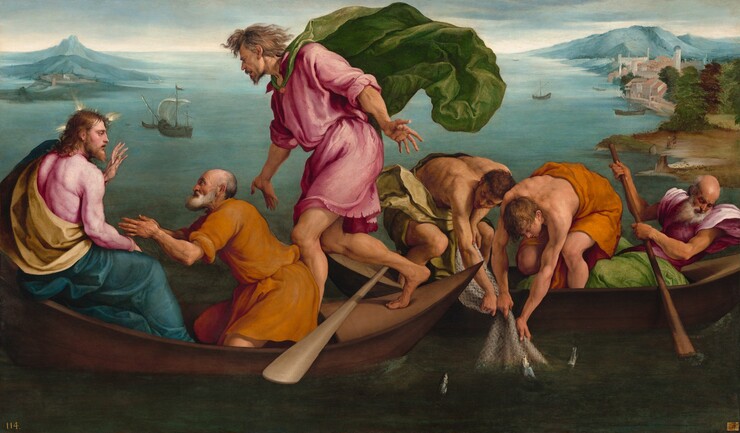 Jesus will not depart from Peter. And, eventually, Jesus shows him far greater glory and generosity at the cross and in his resurrection. We witness the power of God stooping all the way into the grave to bury death’s power over us. Jesus rises from the grave and ascends to the Father’s right hand to restore us to God.

Peter’s faith in Jesus is evident from the beginning. Despite Peter’s misgivings, he replies to Jesus’ command, “At your word, we will let down our nets.” Peter falls on his knees at Jesus’ feet in an act of worship. He does what we do with every confession of sins. We acknowledge our unworthiness before the one who gives us worth.

Jesus bestows a revised vocation on Simon Peter and all who turn to follow. Jesus says, “From now on you will catch people.”

Fishing is a violent enterprise. By net or hook we drag the fish from an environment in which it flourishes to another in which it will perish.

We do so by the ordinary means God gives us: We speak words that proclaim Jesus rose from the dead; we share fragments of bread and sips of wine by which God redeems us through Jesus’ own body and blood; we practice the ministry of reconciliation, extending God’s peace into our relationships; and we live lives that are Eucharistic, thankfully responding to our new life in Christ.