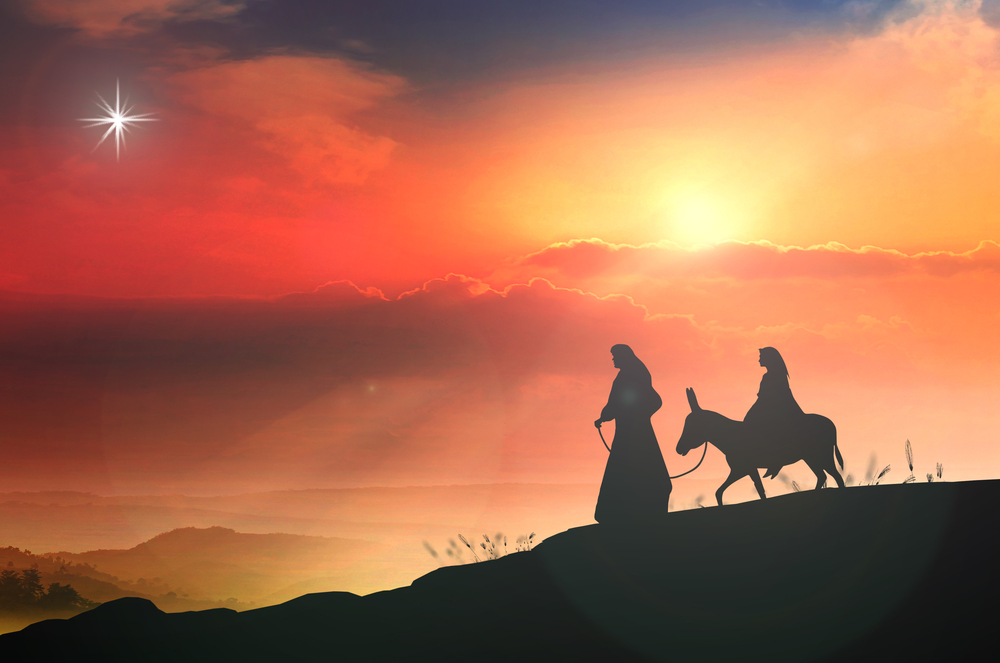 1 In those days a decree went out from Emperor Augustus that all the world should be registered. 2 This was the first registration and was taken while Quirinius was governor of Syria. 3 All went to their own towns to be registered. 4 Joseph also went from the town of Nazareth in Galilee to Judea, to the city of David called Bethlehem, because he was descended from the house and family of David. 5 He went to be registered with Mary, to whom he was engaged and who was expecting a child. 6 While they were there, the time came for her to deliver her child. 7 And she gave birth to her firstborn son and wrapped him in bands of cloth, and laid him in a manger, because there was no place for them in the inn.

8 In that region there were shepherds living in the fields, keeping watch over their flock by night. 9 Then an angel of the Lord stood before them, and the glory of the Lord shone around them, and they were terrified. 10 But the angel said to them, “Do not be afraid; for see–I am bringing you good news of great joy for all the people: 11 to you is born this day in the city of David a Savior, who is the Messiah, the Lord. 12 This will be a sign for you: you will find a child wrapped in bands of cloth and lying in a manger.”

13 And suddenly there was with the angel a multitude of the heavenly host, praising God and saying, 14 “Glory to God in the highest heaven, and on earth peace among those whom he favors!” 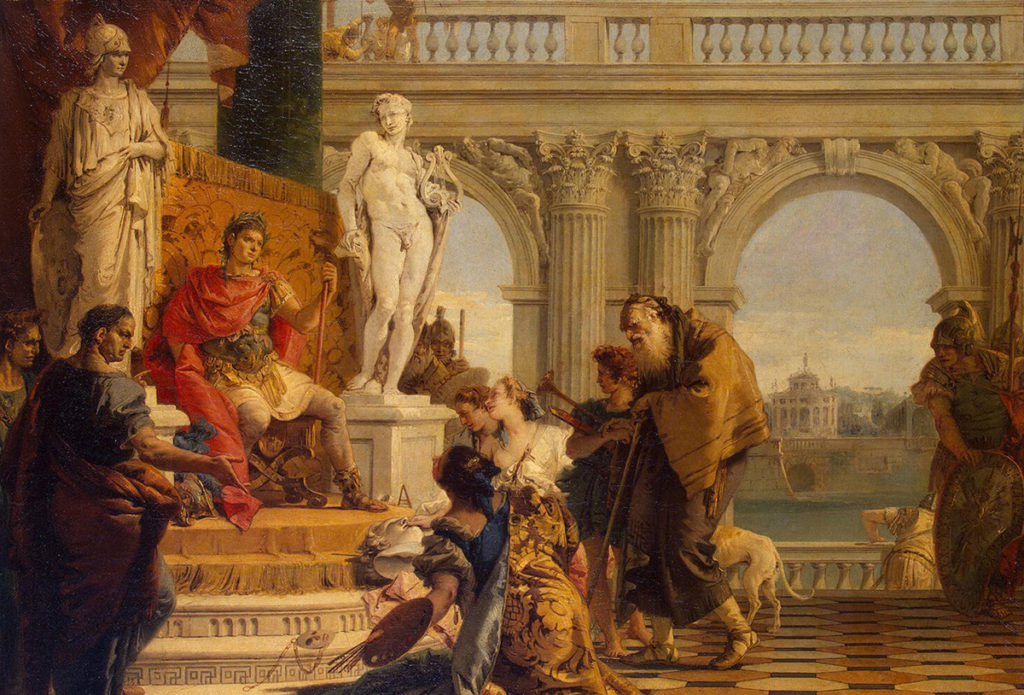 DIAGNOSIS: Making a Living in the Dark

Because Caesar needs to account for everything and everyone, from citizens of occupied territories to skins of wine crossing state lines, all for the sake of taxing everything that moves or breathes, Caesar needs a host of accountants. Not surprisingly, we work as Caesar’s bean counters. Yes, we’ve been instructed to “render to Caesar what is Caesar’s,” but we didn’t really need permission or command. We instinctively keep books. On everything. It’s the way of the world. The shepherds among us guard the sheep on the hillsides all night to make sure we don’t lose even one, and we count them every few hours. When we’re not counting sheep, we’re busy recording in our minds every debit and credit that accrues around us. We notice and remember every slight, fault, and error. We know precisely who owes whom, for what, and how much. We know who belongs and who doesn’t, who has earned and deserves a seat at the table and a place to sleep at night. Despite our copious records, however, we’re nervous, suspicious, and sleepless. We don’t trust Caesar or his statistics, and we’re not too sure about our neighbors and their little black books either. Do they know things, and have they seen things that have escaped our notice or fled our memory?

Truth be told, our trust problem goes well beyond Caesar. When we lie awake nights counting sheep and padding the credit side of our community and family ledger, in fleeting moments of truth-telling we recognize that we don’t trust the one for whom Caesar works and who holds even Caesar accountable—if indeed there’s anyone higher up the pecking order than Caesar. Little wonder we never quit playing the universal human game called “When We Take Over . . .”. In the end, no one else looks out for us. We must control the world ourselves. If that’s too tall an order, we can at least control this hillside, protect our family, number and guard our sheep, and manage the economy of debits and credits playing out in our record-keeping hearts. Beyond that, we don’t have it in us to care about anyone else, even those a mere valley away.

Suddenly, in the familiar gloom of despair we have learned to navigate blindly, a flood of light shines. Not merely startled, we are “sore afraid.” Like sailors on deck above the fugitive Jonah’s bunk, we fear a great fear—The Great Fear. If that light exposes not only what’s in our books, but in our hearts, souls, and minds, we are dead folks walking. $#@+! Turn off the light! Please? Let us continue to live like spiders, hiding by day and checking our books and traps in the darkness.

PROGNOSIS: “Do not fear! We have good news, great joy for all people!”

But no. The light keeps shining, and next we hear angel-talk. “Do not fear!” (“Ha! That’s what they all say.”) “We have good news,” they continue, “and reason for great rejoicing. Your dream-game, ‘When we take over . . .,’ well, it’s come to pass! A savior, messiah, chosen one, has been born in your land.” They go on a moment longer, something about a diapered-up baby lying in a feed-trough. It doesn’t make much sense. But then, partly because this whole narrative in Luke is an operetta with lots of songs, and partly because it’s sometimes the only thing that works, they (whoever they are) begin to sing. We would need to learn the whole story, of course, to make sense of the “good news,” but the song keeps us going and eventually, over time, we “get it.” The child born into the world of relentless accounting has no place there, at least no ordinary place. His parents go on their journey in obedience to the laws of accounting, but they have no room reservations, so the child comes into the world a traveler with no home or table, laid like food in a trough near a town called House-of-Bread, unaccounted for except by us night-working shepherds practiced at not losing a single member of the flock. He would stay on the road, this child grown to live as the Son of Man who set his face toward Jerusalem, with no place to lay his head until once again he is wrapped in strips of cloth and laid in a borrowed place. (How like our own journeys in this world where taxes and death remain the only certainties.) Then came another dazzling, initially frightening light, and a command to remember, and eventually relive, the journey he made to this place.

With that earworm song still playing in our hearts, we make our daily journey, and we have been surprised, over and over, to see him here on the road with us, looking like an unaccounted-for stranger at first, then feeding us at our own meager table. He bade folks, “Follow me,” but he keeps tracking us down, finding us, eating and drinking and being with us in out of the way places, including our darkest nights on the hillside. It’s odd, this “glory” about which we sing, but glory it is. As for our books and ledgers, we’ve never fully succeeded at leaving them behind, but we no longer trust them. Because we know the accountants, we know our books lie. Instead, we trust the Son of Man’s bookkeeping.

You can’t make this stuff up. We try to explain it, but can’t account for all we’ve known and discovered on the road we travel. So, we keep singing—turning a single syllable into an aria like all the professionals and angels do. It’s heard everywhere. Other homeless ones hear and come see. We take them in. Everywhere we sing is Bethlehem, the House of Bread, where there’s food for everyone, regardless of what Caesar says or whether you have a reservation. And we keep counting sheep, lest we ever lose even a single little one or wanderer. We are shepherds, after all.