32When Mary came where Jesus was and saw him, she knelt at his feet and said to him, “Lord, if you had been here, my brother would not have died.” 33When Jesus saw her weeping, and the Jews who came with her also weeping, he was greatly disturbed in spirit and deeply moved. 34He said, “Where have you laid him?” They said to him, “Lord, come and see.” 35Jesus began to weep. 36So the Jews said, “See how he loved him!” 37But some of them said, “Could not he who opened the eyes of the blind man have kept this man from dying?” 38Then Jesus, again greatly disturbed, came to the tomb. It was a cave, and a stone was lying against it. 39Jesus said, “Take away the stone.” Martha, the sister of the dead man, said to him, “Lord, already there is a stench because he has been dead four days.” 40Jesus said to her, “Did I not tell you that if you believed, you would see the glory of God?” 41So they took away the stone. And Jesus looked upward and said, “Father, I thank you for having heard me. 42I knew that you always hear me, but I have said this for the sake of the crowd standing here, so that they may believe that you sent me.” 43When he had said this, he cried with a loud voice, “Lazarus, come out!” 44The dead man came out, his hands and feet bound with strips of cloth, and his face wrapped in a cloth. Jesus said to them, “Unbind him, and let him go.” 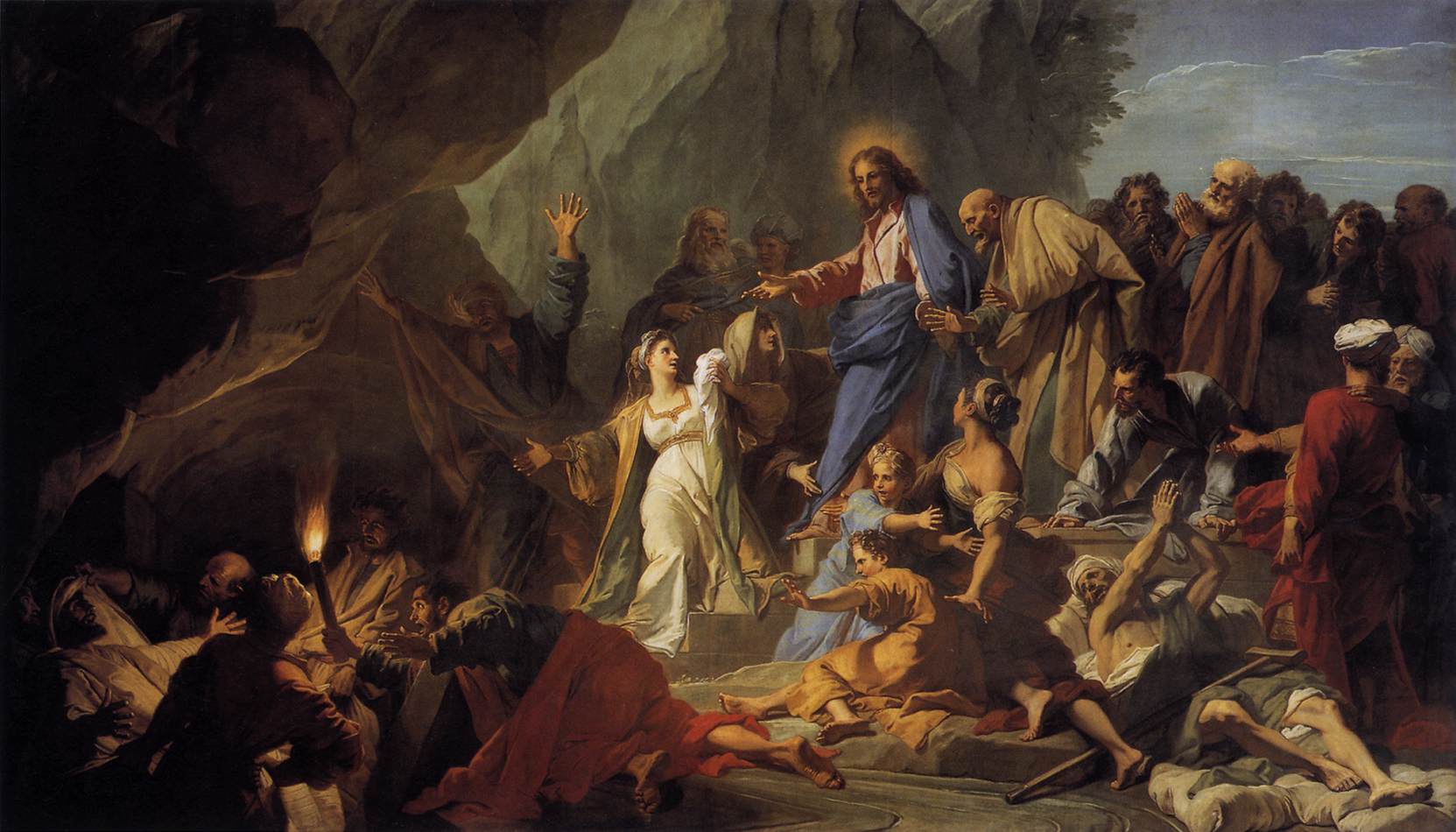 It was a teachable moment, but one that revealed something that no one had ever thought before. Lazarus, the brother of Mary and Martha, had just died due to an illness. His family and friends, including Jesus, were grieving. Why were they grieving? Because our basic human imperative is to preserve life, because life is its own raison d’etre and God’s most precious gift to creation apart from faith in Christ (see Step 5). But now Lazarus was dead, that is, no longer alive. For an observant Jew in the first century, it was well understood that Lazarus was now in Sheol, the place of the dead. Many Jews also believed that there would come a day, in “the age to come,” when the dead would rise again to some kind of bodily life (resurrection). In the Jewish mindset, Sheol was thus a way-station to await the resurrection. Since even the dead had to be somewhere, Sheol was that designated place. Father Abraham was there, so it was not a “bad” place; but neither was it some kind of “heaven.” It was a place for the dead to await life in the age to come, or as some would say, “the kingdom of God.” Why then all the grieving? And what does all this have to do with Jesus? Truth be told, grief is not about the whereabouts of the dead, but about the impact that the dead had on the living. Grief expresses that impact and at the same time forms a little community that celebrates life. And it is chiefly because of “life” that Jesus raises Lazarus from among the dead.

While death has more to do with the dead, grief has more to do with the living. Both death and grief are symptoms, however, of a far greater problem, namely sin. As we now know, Sin (with a capital S) interpenetrates every aspect of our lives with a death-like grip. We are bound to it, so to speak, deceived into believing that our lives are not God’s gift to us after all. Sin makes us believe that we, not God, are in possession and control of “our” life. But, truth be told, Sin casts a long, inescapable shadow over us that leads us inevitably to Death. When therefore Jesus (as Israel’s messiah-king) raised Lazarus from among the dead, he was announcing that God was about to upend the natural order of sin and death! And, looking a bit further ahead, that God was about to set the world aright; that is, to overcome the problem of Sin and Death altogether, and thereby reveal to the world true, abundant “life.” Didn’t you hear Jesus say to Martha: “Didn’t I tell you that if you believed [in Jesus, 11:25-26], you would see the glory of God?” (v. 40). But in Sin’s tight grip Martha could not believe; and neither could we.

Is there be anything worse for us than Sin and Death? Yes, God himself! If the God we mean here is the God of Israel, that is, the creator of the world and of Israel, then yes. If this God is the One who gives us life and reveals himself in and through the history of Israel, then yes. If this God created and sustains a world still in the grip of Sin and Death, then yes. And if, moreover, this self-same God is the One who causes some of us but not all of us (apparently) to believe in Jesus, then yes. It is no surprise that God rightly holds us all responsible for sin—a condition from which we cannot escape – and therefore sends us to our deaths, But why is it, we might ask, that this same God, wholly on his own, loosens the grip of sin (by the gift of faith) on some of us but not (apparently) on all of us? If we are thus in the inescapable grip of this God—and we are—so that we cannot by any means will our way out or pray our way out or love our way out, then yes, to peer around the corner, we are wholly at the mercy of God.

As far as we know, there was nothing special about Lazarus that Jesus should raise him from among those who had died. Nor, as far as we know, did Lazarus ever thank Jesus for doing so. Lazarus was wholly in God’s grip, more so even than in the grip of Sin and Death. For some, God’s “glory” (v. 40), God’s mercy, was thereby revealed. For others (in John’s Gospel), the resurrection of Lazarus had the effect of crystallizing the political forces against Jesus (11:45-53). Yet what no one realized or could have realized, until it happened—our God is a God of history!—is that Jesus, as Israel’s messiah-king, was put to death as the representative head of Israel, and thus also of humanity and of all creation; and in that capacity stood before God as the foremost of all sinners, so that in his death on the cross God, yes God, exhausted Sin and Death as powers that had held us all in their grip. Jesus’ resurrection proves this to be true, that God’s mercy-grip for us in Jesus is greater still than is his death-grip on us apart from Jesus.

When Jesus called Lazarus out of his death-grip, he called forth the life that God had first given him. In a truer sense Jesus called forth the life that he, Jesus, already had in himself. This is a life that neither Lazarus nor we have in ourselves, but a life freely given to us by God. When we hear the call, “Come out!” (v. 43), as we hear in the gospel that our sins are “forgiven,” God is calling us out of sin and death to faith in Christ, even as he called Martha and Lazarus to faith in him against Death itself. With God’s call, God is creating faith in us as a mercy-gift of abundant life (a.k.a., the Holy Spirit). Faith in Christ, then, is nothing less than a new creation, abundant life, a mini-resurrection as it were. Set free from Sin’s death-grip and bound forever to God our creator, our faith-gift survives death and will be further clothed with God’s glory at the Last Day.

Not all our questions are answered. That, too, is a consequence of faith; there will surely be more surprises to come. For we are in the grip of God. We don’t want to go out on our own again. Our death in Christ ends our quest for self-fulfillment, for self-justification (in older language). In view of this, our own death is a gift because it leaves us wide open to the mercy-grip of God, to a life of faith, to the abundant life of God’s new creation. What shall we do with our new life—rather, what may we do—now that there is nothing we can do to obtain what has been freely given and will not be taken away? Surely, the life that Jesus lives (on both sides of death) for us provides the answer to that “teachable moment”: In loving one another, most especially our enemies, unrelentingly and without counting the cost, we see abundant life come to life. And that is just the beginning!