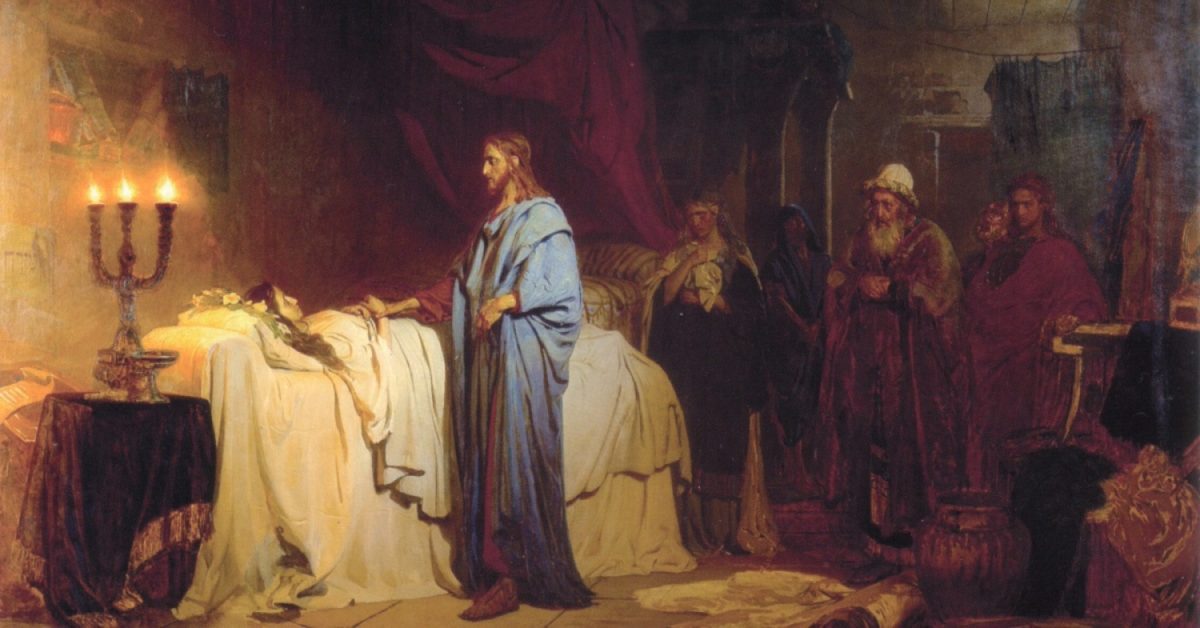 21When Jesus had crossed again in the boat to the other side, a great crowd gathered around him; and he was by the sea. 22Then one of the leaders of the synagogue named Jairus came and, when he saw him, fell at his feet 23and begged him repeatedly, “My little daughter is at the point of death. Come and lay your hands on her, so that she may be made well, and live.” 24So he went with him.
And a large crowd followed him and pressed in on him. 25Now there was a woman who had been suffering from hemorrhages for twelve years. 26She had endured much under many physicians, and had spent all that she had; and she was no better, but rather grew worse. 27She had heard about Jesus, and came up behind him in the crowd and touched his cloak, 28for she said, “If I but touch his clothes, I will be made well.” 29Immediately her hemorrhage stopped; and she felt in her body that she was healed of her disease. 30Immediately aware that power had gone forth from him, Jesus turned about in the crowd and said, “Who touched my clothes?” 31And his disciples said to him, “You see the crowd pressing in on you; how can you say, ‘Who touched me?’ ” 32He looked all around to see who had done it. 33But the woman, knowing what had happened to her, came in fear and trembling, fell down before him, and told him the whole truth. 34He said to her, “Daughter, your faith has made you well; go in peace, and be healed of your disease.”
35While he was still speaking, some people came from the leader’s house to say, “Your daughter is dead. Why trouble the teacher any further?” 36But overhearing what they said, Jesus said to the leader of the synagogue, “Do not fear, only believe.” 37He allowed no one to follow him except Peter, James, and John, the brother of James. 38When they came to the house of the leader of the synagogue, he saw a commotion, people weeping and wailing loudly. 39When he had entered, he said to them, “Why do you make a commotion and weep? The child is not dead but sleeping.” 40And they laughed at him. Then he put them all outside, and took the child’s father and mother and those who were with him, and went in where the child was. 41He took her by the hand and said to her, “Talitha cum,” which means, “Little girl, get up!” 42And immediately the girl got up and began to walk about (she was twelve years of age). At this they were overcome with amazement. 43He strictly ordered them that no one should know this, and told them to give her something to eat. 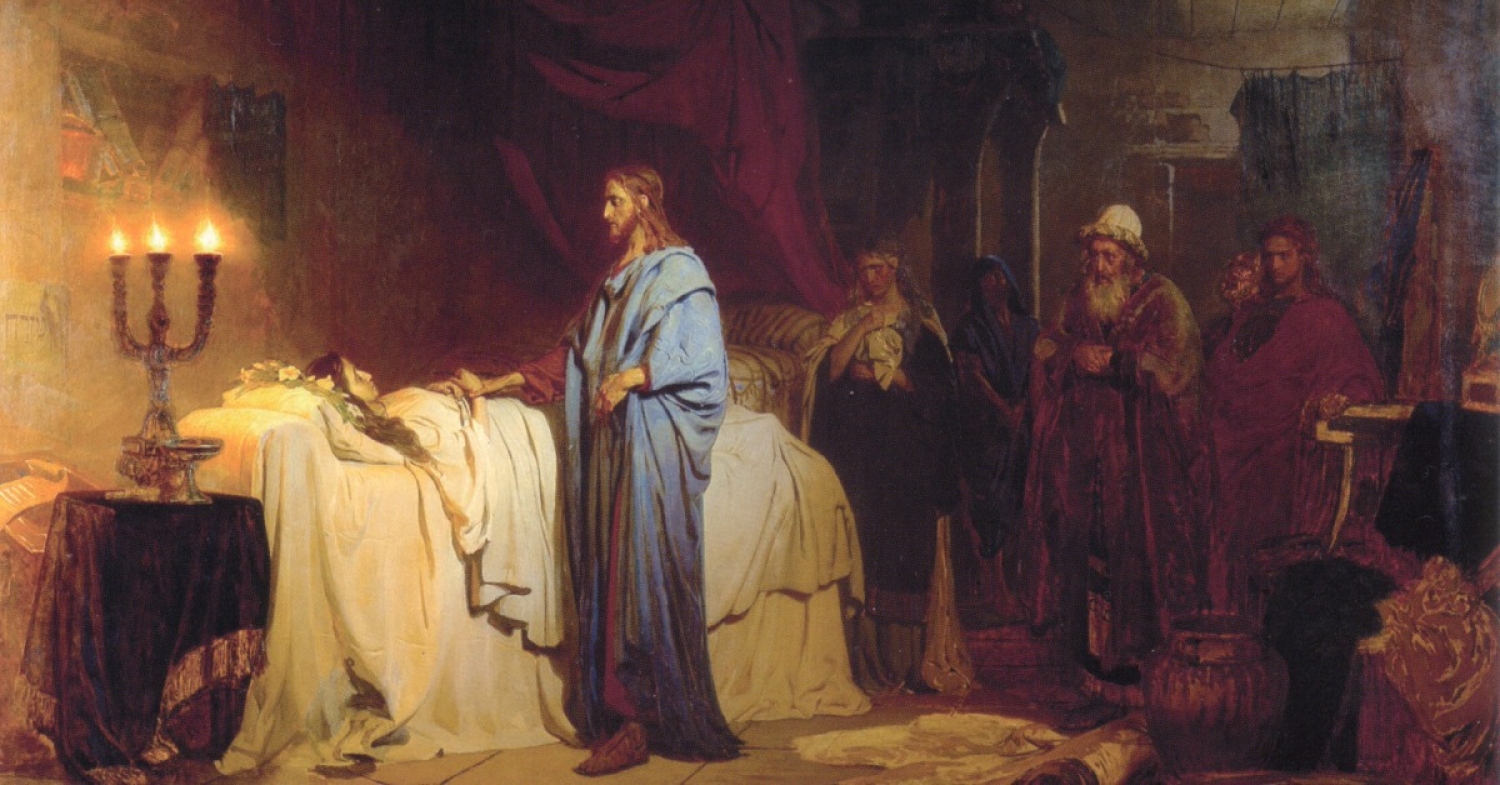 We live in a world where interruptions are despised. We believe that our plans and schemes are the only ways to navigate life. Jesus boldly interrupts all that. Jesus is God’s interruption of our old, dying lives destined for the cemetery.

Just when you sit down to dinner with your family, you get a phone call. A sudden and unexpected rain shower ends your picnic. The stock market plunges and changes your retirement plans. You get a call from your physician asking that you to come into his office for a visit . . . immediately! Our lives are riddled with interruptions. We hate how they disrupt our lives.

Today’s Gospel is also riddled with interruptions. The leader of the synagogue, Jairus, and his unnamed daughter, had their lives interrupted by illness and death. An unnamed woman had her life interrupted for twelve years by a never-ending hemorrhage. Both Jairus and the hemorrhaging woman interrupt Jesus’ busy life with pleas for help. Such interruptions are enough to drive us crazy.

Such interruptions seem like assaults because they constantly upset our plans, schedules, and calendars—all those efforts we have devised to stay in control of our lives. We are reminded by the famous words of the Scottish poet, Robert Burns, “the best laid plans of mice and men often go awry.” Interruptions shatter any illusions we may have constructed for ourselves that we are in charge or in control of life. Jairus and the woman were both desperate to believe in someone or something they could count on in their time of need. So, they interrupted the life of Jesus.

No one escapes the cemetery. No plans, schemes, or schedules can thwart when that last great interruption comes crashing in on our lives.

The woman hoped she could evade the last interruption but no physician or any amount of money had worked. She is now worse off than ever. Jairus’s hope that Jesus could make a difference was interrupted and then shattered with the news of his daughter’s death.

However, even death was not the last or the worst interruption. When Jesus arrived at the house of Jairus, he interrupted the funeral that had already begun. He interrupted their weeping and wailing by asking, “Why do you make a commotion and weep? The child is not dead but sleeping.” But the crowd pushes back against Jesus’ interruption by scoffing at his words. Who is he to interrupt their plans?

Jesus responds and “put[s] them all outside.” Of course, we know who Jesus is. When Jesus kicks these unbelievers out of the house, it is none other than God interrupting their funeral plans and excluding them from the opportunity to behold the miracle he is about to accomplish in Jesus. When you are excluded from the resurrection, there is nothing left but the cemetery. In the cemetery, there are no more interruptions. No more plans or hopes. We are simply dead … and done! 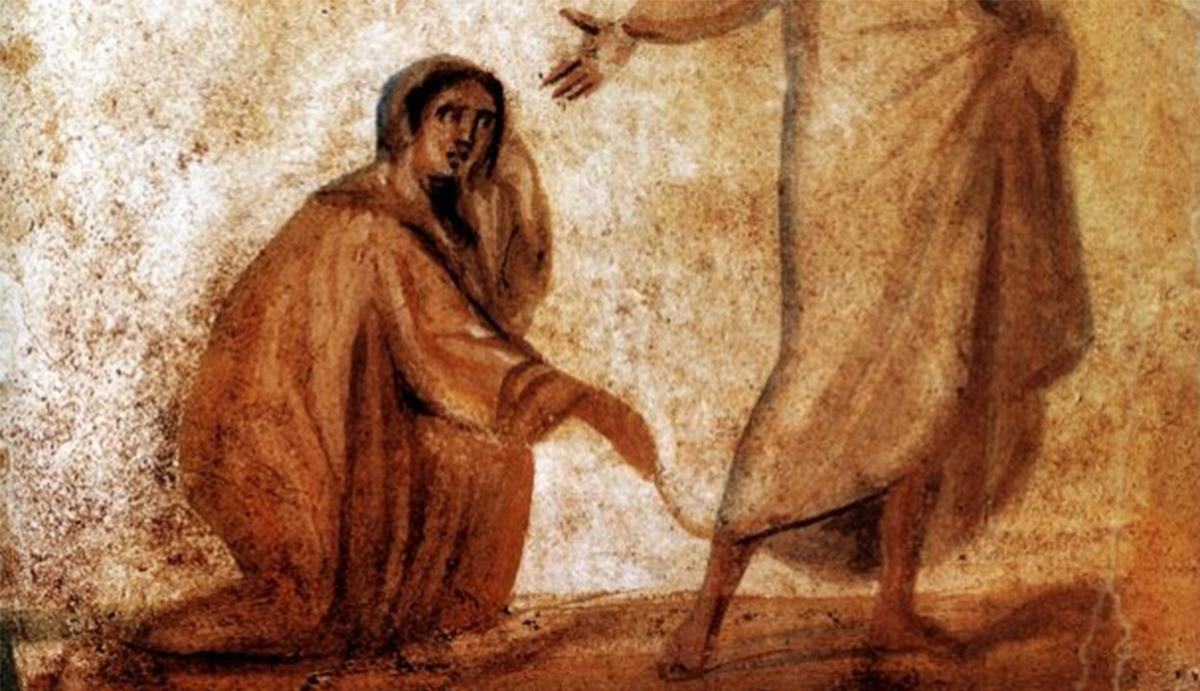 It might have been in character for Jesus to rebuke the woman’s interruption. Who was she to sneak up behind him and touch his cloak? He was a busy man! He had no time to waste with this withered old woman. He had plans and a schedule to keep. He had to make it to Jairus’ house before his daughter died.

But Jesus is different! For him, there is no such thing as an inconvenient interruption. He takes time to commend the woman’s faith. Even when this delay made Jesus too late to save Jairus’ daughter from death, Jesus is undeterred. No big deal! Jairus’s daughter is not dead. She is only “asleep.” He wakes her up just in time for breakfast!

The hemorrhaging woman refused to accept her destiny as an unclean outcast doomed to failure and death. She had heard of Jesus and his interruptions of this death-ridden world. She believed and hoped that, even if she only touched the clothes of Jesus, she would be healed. Her faith was not disappointed. Jairus demonstrated the same kind of defiant faith. He was not disappointed either. Jesus raised his daughter from the dead. The faith of the woman and Jairus interrupted the fatalistic and faithless assumptions of the dying world around them.

Suddenly life is different. All those interruptions, which we despised because they messed up the life we thought we could control, now become opportunities to give ourselves away for the sake of the world. We interrupt the old world where someone was always asking, “What’s in it for me?” by now asking, “What can I do for you?” The cries of a child who interrupts our sleep in the middle of the night, the tears of a grieving friend who interrupts our morning coffee, the hungry faces of the poor who interrupt our pleasant middle-class lives are no longer inconveniences and distractions but opportunities and invitations to love the world.

And just as the resurrection interrupts our lives to bless us, so it is also the means by which we can bless the world.