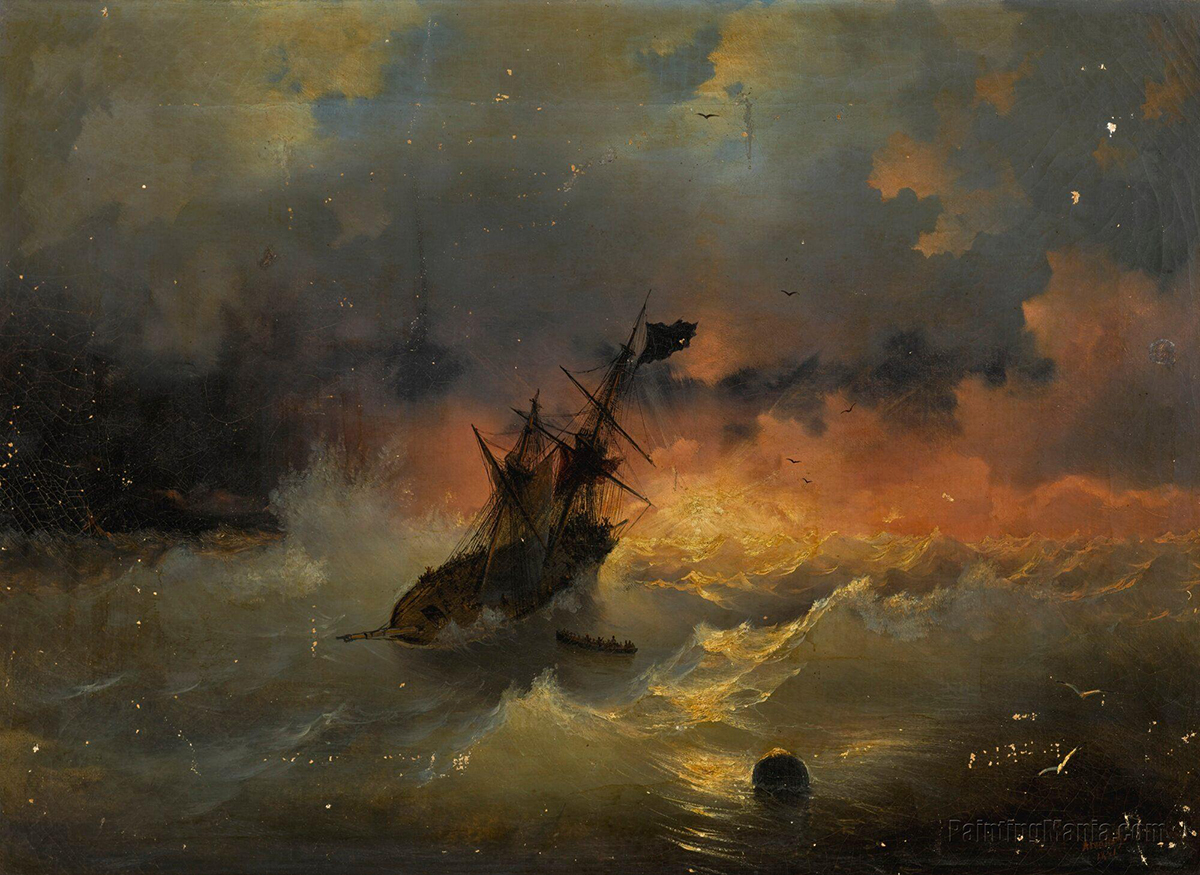 35 On that day, when evening had come, he said to them, “Let us go across to the other side.” 36 And leaving the crowd behind, they took him with them in the boat, just as he was. Other boats were with him. 37 A great windstorm arose, and the waves beat into the boat, so that the boat was already being swamped. 38 But he was in the stern, asleep on the cushion; and they woke him up and said to him, “Teacher, do you not care that we are perishing?” 39 He woke up and rebuked the wind, and said to the sea, “Peace! Be still!” Then the wind ceased, and there was a dead calm. 40 He said to them, “Why are you afraid? Have you still no faith?” 41 And they were filled with great awe and said to one another, “Who then is this, that even the wind and the sea obey him?”

“You recognize that your suffering isn’t all about you, but can be the means by which God reaches other tempest-tossed sailors. So, you do the obvious and accompany others through their storms.”

Step 1: Initial Diagnosis (External Problem): Everything is out of control!

“A great windstorm arose, and the waves beat into the boat, so that the boat was already being swamped.” Everything is going along smoothly as you voyage through life, and then bam! You get hit hard. Maybe it’s a divorce, an unfavorable diagnosis, a hurricane, a downsizing, or a virus (pick your catastrophe) and suddenly life is chaotic. You are battered about. You are in pain. Desperately, you look for a way to gain control. You are alarmed by the waves lapping at you, trying to pull you down into the ocean depths (death/evil/chaos).

Step 2: Advanced Diagnosis (Internal Problem): A Vote of No Confidence

“Teacher, do you not care that we are perishing?” You just don’t get it. You wonder why you are being hit so hard. You question God’s involvement. Why, you ask, isn’t God doing something about your situation? You accuse God and ask—with desperation: Don’t you care about me? I thought you were in control, but you’ve let me down! And then you think—only to yourself, of course—that God must be either powerless or simply callous, and you lose faith. You look elsewhere for relief. Mostly, you trust your own savvy, your survival skills. And even more often you turn to other would-be gods that entice you with promises of smooth sailing, control over the wind and the waves if you just stick with them.

“Who shut in the sea with doors when it burst out from the womb?” (Job 38).
Ultimately, with the winds whipping at you and the waves poised to devour you, you grasp that you’ve been betrayed by your own savvy and your would-be gods. You are going down. It is inevitable. But worse yet, you recognize a force behind the wind and waves that is pulling you down! That force, as Job learned many centuries earlier, is the Creator of the universe, the architect of the control system that banishes non-trusters like you to the depths (death/chaos/evil). 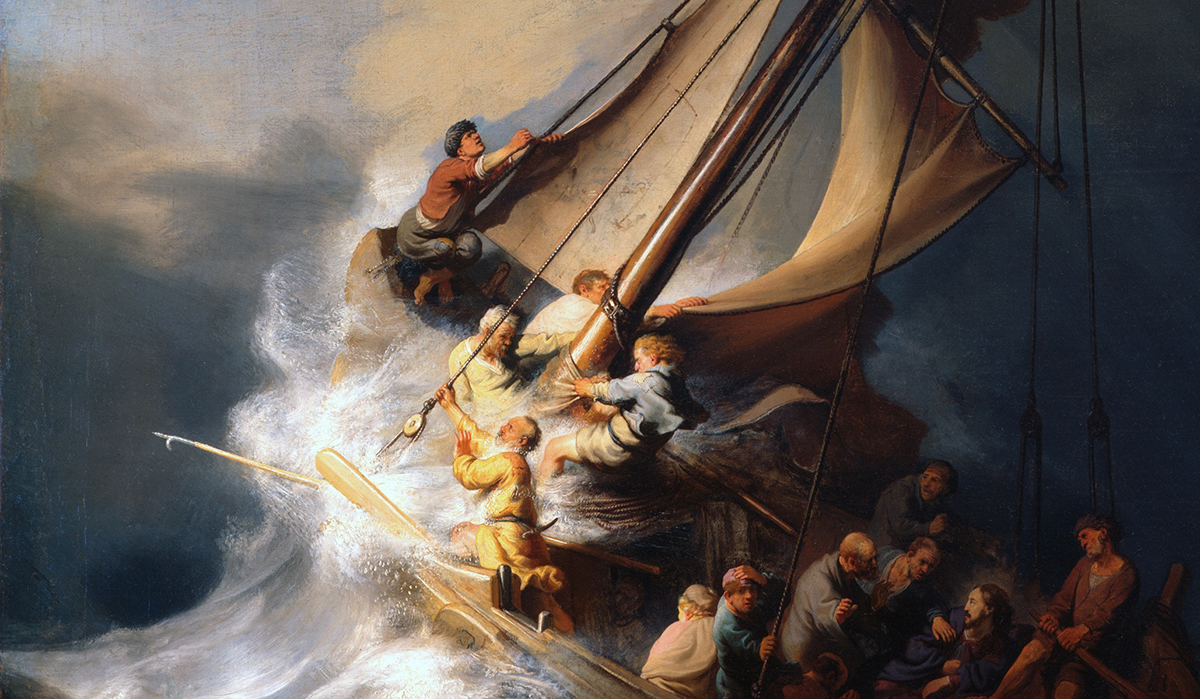 “Then the wind ceased, and there was a dead calm … and they said to one another, “Who then is this, that even the wind and the sea obey him?” To the disciples’ great consternation and amazement, their sleeping master, Jesus, woke up and brought the wind and waves to a dead stop. Who is this guy? Only the creator of the universe can demonstrate such power and control! Is this God in the boat with them? Could it be that God has been subduing more than the wind and the waves—and permanently?

It takes a while, but the disciples—and you—finally grasp that in Jesus, God has joined God’s self to all humankind—to overturn God’s own control system of judgment. In Christ, God joins you in your perishing. Remember Jesus’ agonized question on the cross—the kind you had screeched earlier: “God, don’t you care? Why have you forsaken me?”

Ultimately, on Easter morning, God answers with a resounding “Yes, I care! No longer will I forsake you to my judgment. In Christ’s resurrection from the dead, I reclaim (not only him but) you.” Not only has the deep sea been tamed, now death cannot do you in. Jesus did this for you. Suddenly, you notice that Jesus has been in the boat with you all along—enduring the storms with you, and sitting so close that your fear subsides and all you feel is relief and trust. You begin to see God in a completely new way, as merciful and loving.

Step 5: Advanced Prognosis (Internal Solution): The Drowning is Over

“Open wide your hearts also” (2 Corinthians 6:13). It dawns on you that you’ve been in stormy waters before, submerged in the waters of baptism—where the old you perished, and you were joined with Christ in resurrection. This is a God you can love: the merciful Jesus who descended into the depths and refused to surface without you. You worship him. Your heart has changed, and bathed in Jesus’ promise, “I will never forsake you—come hell or high water,” you are no longer afraid. You trust him to steer you through all of life. Joy bubbles up inside you.

“….as servants of God we have commended ourselves in every way: through great endurance, in afflictions, hardships, calamities, beatings” … etc. (2 Corinthians 6:4-10). That joy allows you to smile calmly when the wind blows and the waves lap at you—they are simply to be expected, and you can now endure them. Like Paul and the apostles, you bear the afflictions and adversities that inevitably come your way (see the full epistle reading from 2 Corinthians 6). You recognize that your suffering isn’t all about you, but can be the means by which God reaches other tempest-tossed sailors. So, you do the obvious and accompany others through their storms. You weather their failings and faults, “forgiving their sins on earth.” You’re confident because you have thrown your cares to the wind—the Holy Wind. And off you go: Bon Voyage!