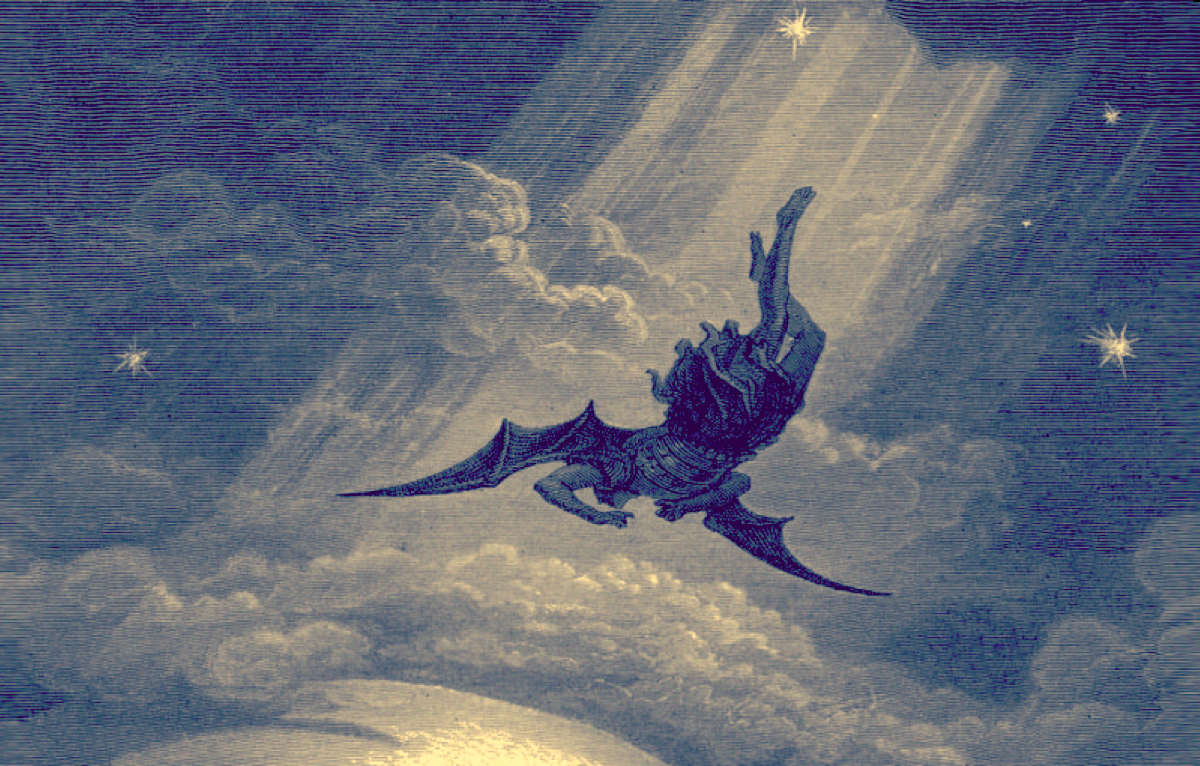 17 The seventy returned with joy, saying, “Lord, in your name even the demons submit to us!” 18 He said to them, “I watched Satan fall from heaven like a flash of lightning. 19 See, I have given you authority to tread on snakes and scorpions, and over all the power of the enemy; and nothing will hurt you. 20 Nevertheless, do not rejoice at this, that the spirits submit to you, but rejoice that your names are written in heaven.”
7 And war broke out in heaven; Michael and his angels fought against the dragon. The dragon and his angels fought back, 8 but they were defeated, and there was no longer any place for them in heaven. 9 The great dragon was thrown down, that ancient serpent, who is called the Devil and Satan, the deceiver of the whole world—he was thrown down to the earth, and his angels were thrown down with him.
10 Then I heard a loud voice in heaven, proclaiming,
“Now have come the salvation and the power
and the kingdom of our God
and the authority of his Messiah,
for the accuser of our comrades has been thrown down,
who accuses them day and night before our God.
11 But they have conquered him by the blood of the Lamb
and by the word of their testimony,
for they did not cling to life even in the face of death.
12 Rejoice then, you heavens
and those who dwell in them!
But woe to the earth and the sea,
for the devil has come down to you
with great wrath,
because he knows that his time is short!” 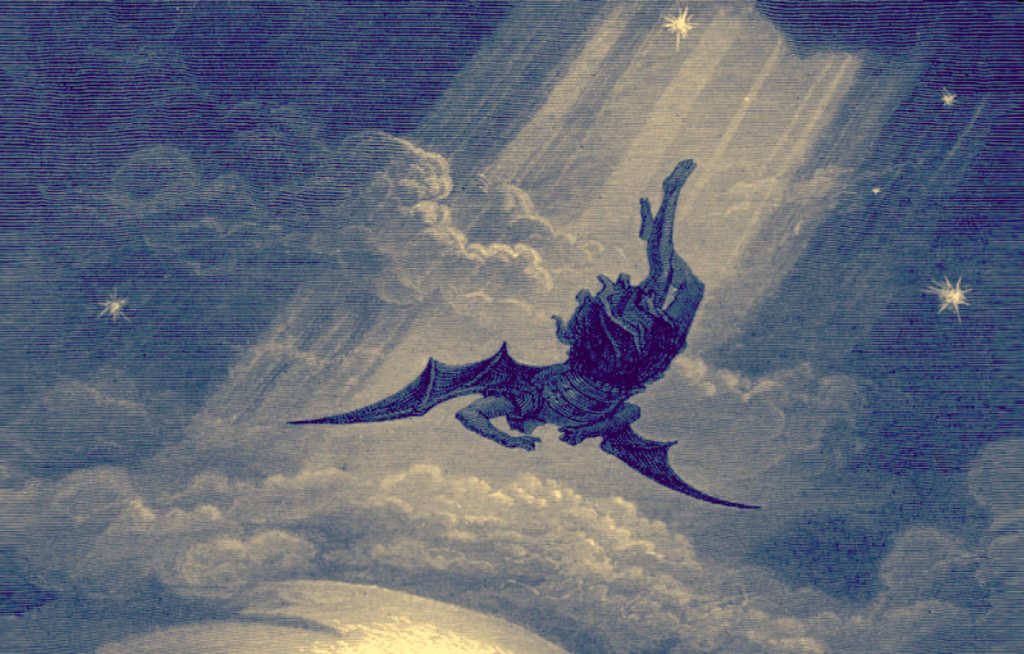 Step 1: Initial Diagnosis (External Problem): The Dark Side of the Universe

Maybe we need to thank George Lucas and Harry Potter for reminding us that there is indeed a “dark side” to the universe and that there are evil forces at work beyond ourselves. But, George and Harry did not invent the dark side. Listen to the book of Revelation once again. The Bible tells us of a much more significant Star Wars long before Darth Vader came around.

Step 2: Advanced Diagnosis (Internal Problem): A Power Beyond Ourselves

“And war broke out in heaven; Michael and his angels fought against the dragon. The dragon and his angels fought back, but they were defeated, and there was no longer any place for them in heaven. The great dragon was thrown down, that ancient serpent, who is called the Devil and Satan, the deceiver of the whole world—he was thrown down to earth, and his angels were thrown down with him. Then I heard a loud voice in heaven proclaiming…, ‘Rejoice then, you heavens and those who dwell in them! But woe to the earth and the sea, for the devil has come down to you with great wrath, because he knows that his time is short!’”

This incident explains a lot. It explains why evil is not something we can abolish by a social program or legislate away in Congress or cure by a cruise missile. Evil is larger than ourselves. There is an Evil Foe who opposes us and opposes God with a cosmic force we cannot comprehend. And so, we need a heavenly power to fight the battle for us. A heavenly champion. A special force who can go against Satan toe-to-toe.

And it explains how Satan works. Satan ultimately works with God’s own law and order. But before that, the “deceiver of the whole world” uses deception and deceit. Satan is a devilish fellow who first tempts us with lies and then becomes a tattletale who slays us with the truth. Satan tempts us all to sin and then hauls us into court and accuses us day and night before God. The Accuser. That’s what the name “Satan” means. The Accuser. The prosecuting attorney.

To the Evil One we are such an easy mark. Our willingness to play fast and loose with God’s commands. Our lusty appetite for forbidden fruit. Our constant efforts to deny and hide and cover-up. Our eagerness to blame our faults on someone else. Just look at what Satan did to Adam and Eve. And then look at what Satan has done to us. That old snake has us nailed against a tree.

Ironically, the only thing Satan has to do is to tell the truth. The truth that we are dead in our tracks and an enemy of God, disobedient and disbelieving. And what a deadly blow that is when it is coupled with God’s justice—a justice which demands that our lack of trust in God and lovelessness towards neighbor be put to death. It is the justice of God that Satan turns against us. God’s own justice. Satan knows God must carry out the verdict of God’s law. 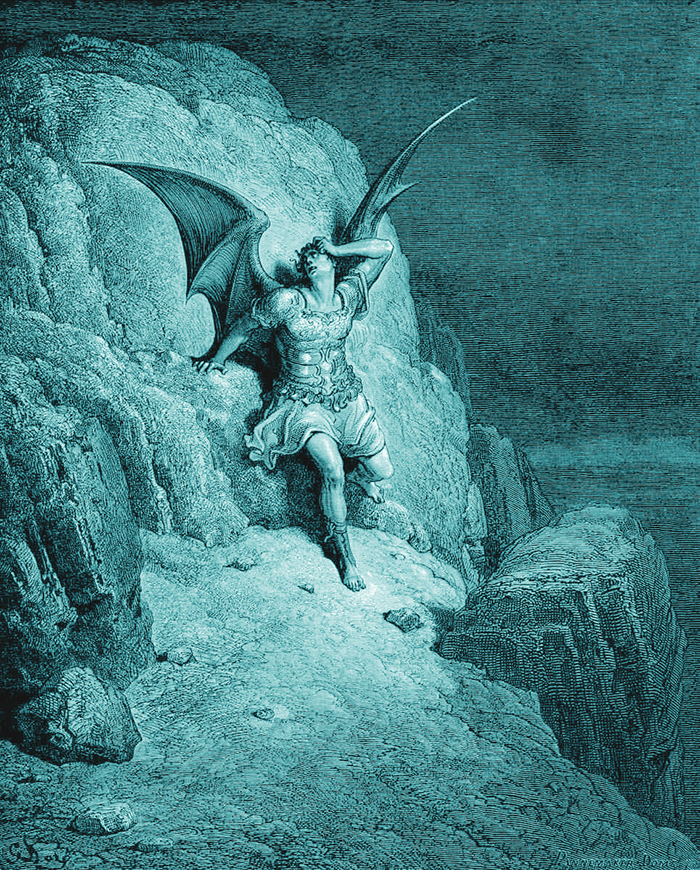 But little did Satan count upon Christ and the cross. What weapon was it—did the Bible say—was given to Michael and his angels? What mighty tool was used to cast down the Accuser but not the accused?

It was Jesus Christ. It was his cross. It was the Lamb of God dying in our place and stead. “They have conquered him by the blood of the Lamb.” How odd it is! Satan is defeated not by a sword at all, but by an s-word: Christ’s SACRIFICE. The sword of justice can do nothing to change God’s justice…but the sacrifice of Jesus and his cross of mercy can!

Through the cross of Jesus Christ, God’s death sentence on human faithlessness is executed. Jesus, the friend of sinners, substitutes himself for us so that the blow falls not on us, but on the Holy One of God. And since the one-who-dies-for-us does so in obedience to God and since he never yielded to the tempter, Satan has no power over him, and Death cannot contain him. Christ is risen! Sin is dead. Court is no longer in session. That old snake Satan no longer has a leg to stand on. The devil must go down into the very hole from whence he came.

Satan lost the battle. Salvation has come. Gone is the devil’s accusing finger. Satan knows his time is short until Christ comes again to bind him up completely. And for a while on earth that means we must endure a little longer his deadly and evil ways.

Step 5: Advanced Prognosis (Internal Solution): A Power Behind and for Us

But Christ has not left us alone, defenseless. There are angels who watch over us. Heavenly powers we do not see or understand, who defend us and protect us. We know the name of one. His name is Michael. And who knows how many scraps, close calls, and near hits we have survived because of him, to say nothing of the rest of God’s heavenly host.

And yet, Christ give us more. He gives us the power and the ministry of the gospel, his Word, his mighty Word! And what a power-filled ministry that is! “I watched Satan fall like lightening from heaven,” Jesus said to his disciples when they joyfully returned to him reporting on the amazing power of God’s gospel word that made the demons submit to them. “I watched Satan fall!” Jesus said.

The solid defeat of sin and death and Satan. Christian ministry is nothing less than that. Martin Luther was right. One word. One little word subdues him. For it is the message of Christ’s cross that forgives all debts, removes all guilt, heals all ills, binds up all evils, and resurrects lost and condemned sinners who were standing on death row.

We have the power to defeat Satan. Christ has given it to us in the ministry of the gospel. And yet, our joy is not in that. Our joy is in the Christ…who won salvation for us… and who has written our names in heaven.