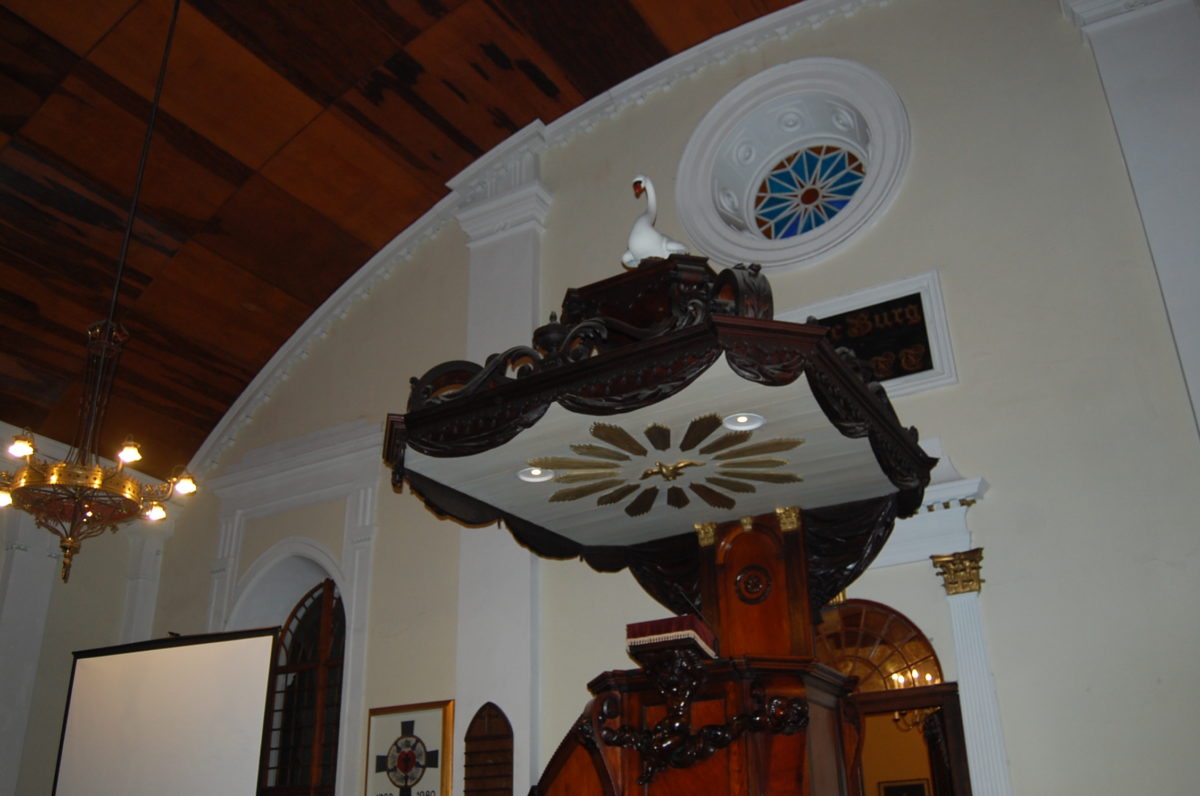 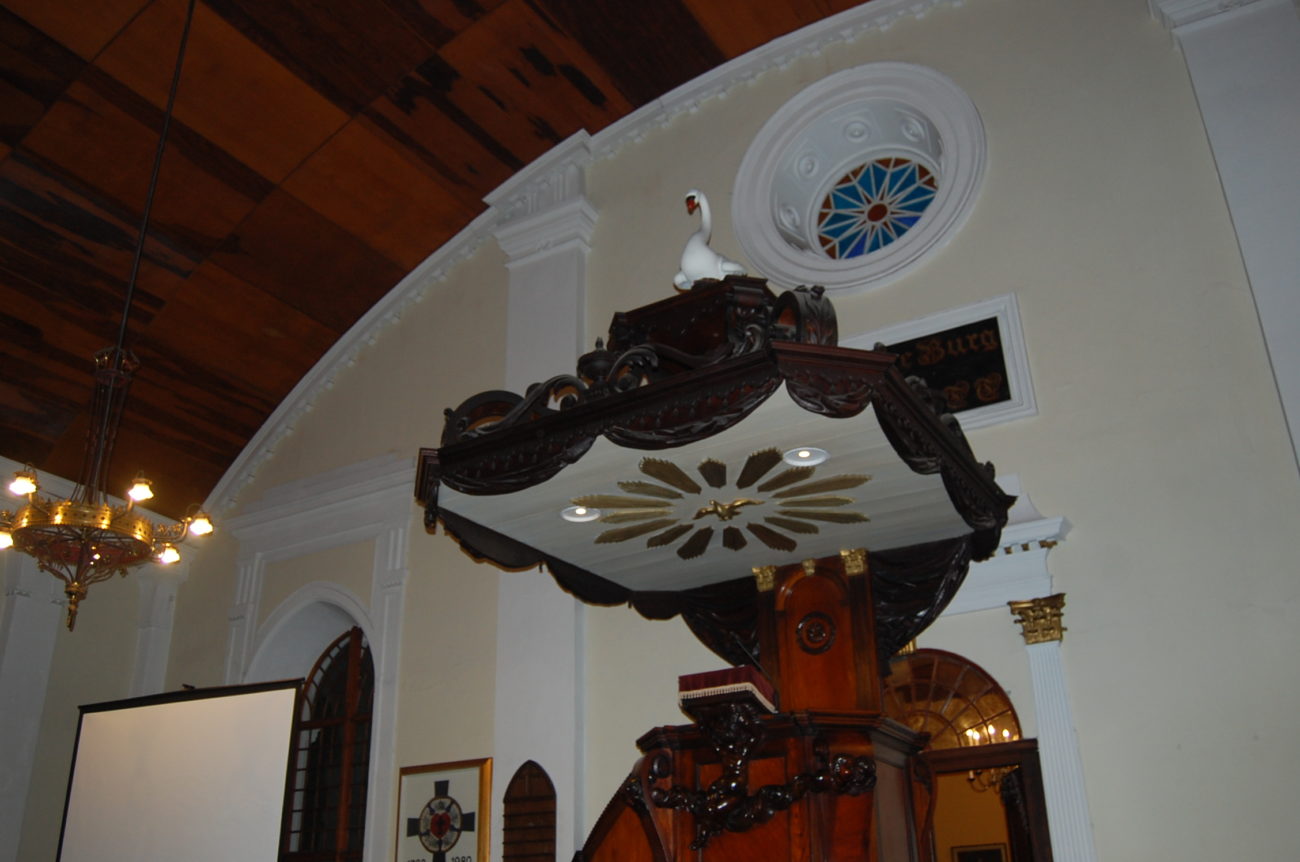 Atop the sounding board of the imposing pulpit in Cape Town’s Strand Street Lutheran Church—the oldest church building in South Africa—there sits a swan; or to be more accurate, the carved and painted figure thereof. From the floor of the nave it appears like a white dot incongruously marring the rich dark wood the pulpit is made of. I saw it in 2013 when I was invited to speak and preach at a synod of the Evangelical Lutheran Church of South Africa (Cape). Pr. Felix Meylahn, a leading theologian of the Cape Church and a standout presenter at our 2012 Crossings conference, arranged that visit. When I asked him what the goose was doing on top of the pulpit, he corrected me. “A swan,” he said. Then he pointed to the bronze lectern. There too a swan, this one cast in metal.

And behind the birds a pair of stories, one of famous last words and the other of secret signals. The famous last words came from Jan Hus, the Bohemian reformer who was burned at the stake in 1415. “Hus” is Bohemian for goose. Thus his declaration as the executioner applied torch to tinder: “Today you cook a goose. In a hundred years God will raise up a swan.” Fast forward to the late 1700s when the Strand Street church was being built in defiance of a decree by the Dutch East India Company that only Reformed churches were permitted in territory it claimed to control. So the builders got crafty. They designed the chancel in classic Reformed style with the pulpit dominating in the middle and a wee little communion table in front of it. Then they snuck in the birds as a sign to the Lutherans who would face this pulpit that they were in the right place after all. No Calvinist confounding of Law and Gospel in this church. Here the two would be rightly divided as the swan of 1517 insisted that they be.

All this came to mind a few weeks ago when I realized that we were coming up on the tenth anniversary of Ed Schroeder’s final post as originator, author, and editor of Thursday Theology. It went out on November 10, 2011, ten years back from yesterday. It seemed fitting to mark the occasion by sending it again. Ed called it his swan song. Indeed it is, though not in the sense of being the last thing he wrote—it was not. But as you’ll see, it turns out chiefly to compile snatches of the song that Luther sang on the topic of faith, and specifically of faith in the promise of Christ. “All along,” says Ed, “the main thing I’ve been pushing too.” Push he did, and ever so well for ever so long

As for now, God keep the swan song going! Be it your song as well, we pray.

The End of the Line: It’s All About Faith and the Promise

Today is Martin Luther’s 528th birthday. Last Sunday was my 81st. Eighty-one. That’s three times three times three times three. The trinitarian number to the fourth power, the number of the New Testament gospels. Seven hundred is one hundred times the Sabbath number. So it’s in the numbers. A fitting time to bring Thursday Theology over my name to Sabbath closure. Thursday Theology #1 was posted 699 Thursdays ago, on May 14, 1998. The Crossings board of directors has planned to keep it going. So stay tuned—I hear that something is already in the pipeline to come a week from today. 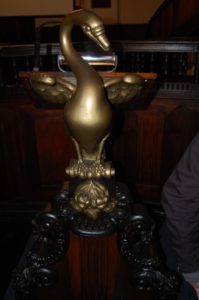 For today’s swan song a collection of Luther quotes—it is, after all, HIS birthday—all on the topic of faith. If there has been a golden thread through these 700 posts it’s been that: the Christian faith and that faith’s object, Christ’s promise. Here are some short citations from Luther on the topic, translated from Kurt Aland’s 1956 Lutherlexikon, a book published while I was doing my doctorate in Hamburg, Germany. Aland apparently read the entire Weimar Edition of Luther’s Works—some 70 quarto (big) volumes at that time, I think—and file-carded (no computers back then) Luther quotes on key theological words—eight hundred such terms—from “Abendmahl” (Lord’s Supper) to “Zweifel” (doubt). More likely, as a German university professor, Aland had his young academic apprentices do all the hard work and he then published the book. The end product is 472 pages. As usual, the translation was vetted (and improved!) by Marie. After all, for one of the grad school years in Germany she had the scholarship. For the second year she had the job as translator at Shell Oil Company that kept us going.

Remember that in German the word for faith and the word to believe/to trust, the noun and the verb, come from the same vocable stem. “Glaube” and “glauben.” So when the translation below shifts from verb to noun, different in English, it was the same sound when Luther said it. The English language is “blessed” by drawing half its vocables from Anglo-Saxon and the other half from Latin. So “faith” tracks back to the Latin “fides” while “believe” is an ancient kin to the word “glauben.”

Now, for the 700th time,
Peace and Joy!
Ed Schroeder 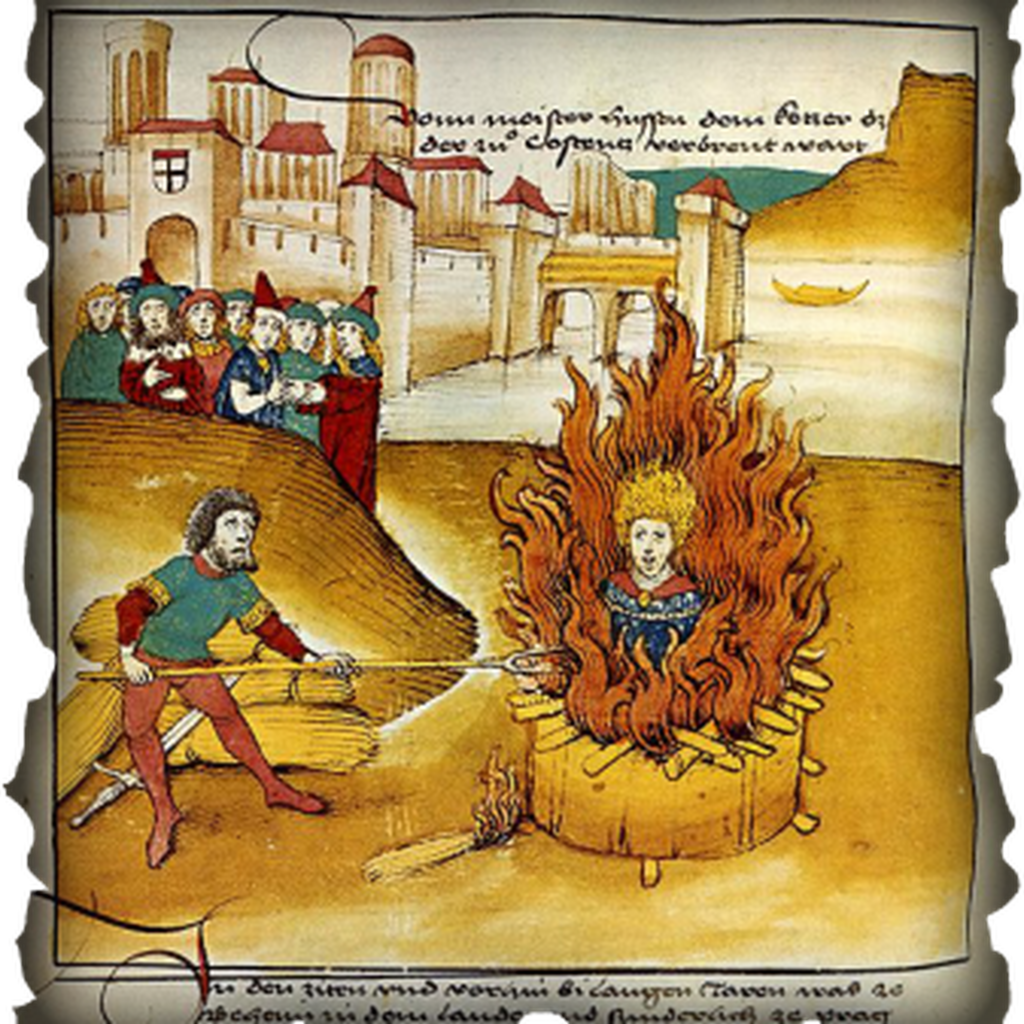 The Death of Jan Hus