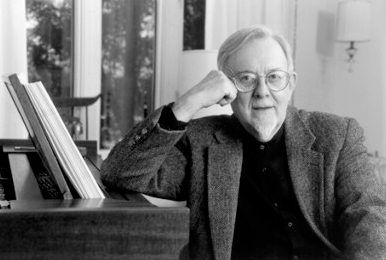 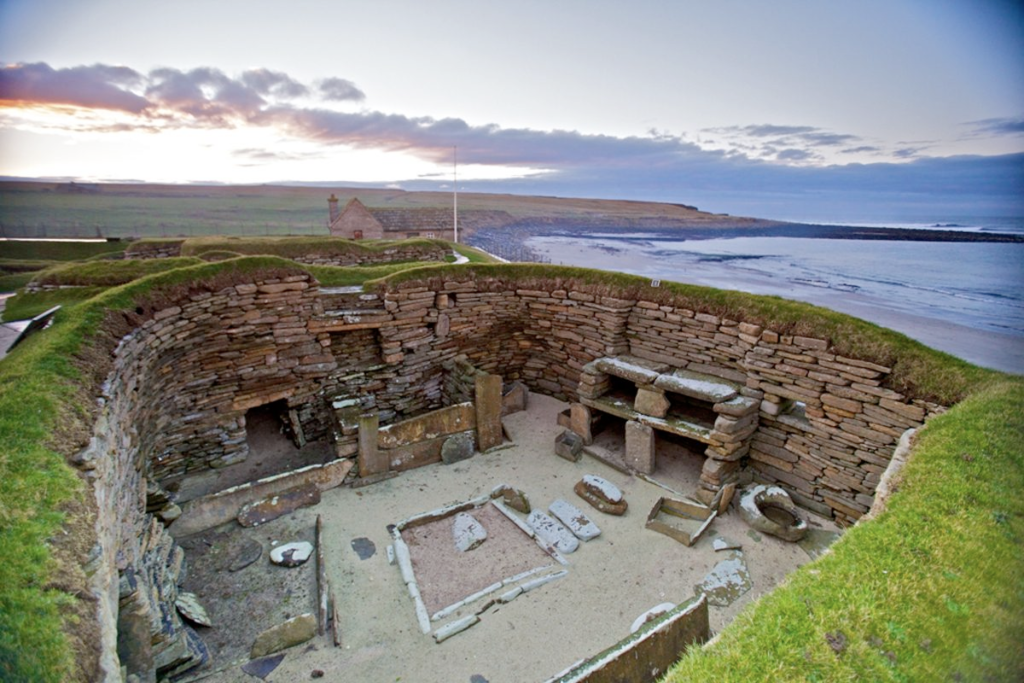 Reformation Day is three days hence, and on a Sunday for once. Lutherans will celebrate, or so one hopes. Will the music be robust and daring, pandemic strictures notwithstanding? One hopes for that too. Lutherans have a deep tradition of singing the Gospel, and often better than they preach it. Here the credit goes to a centuries-old cadre of astonishing musicians and all the more to the Spirit who inspired them.

Today we hear about a contemporary member of this group. Or so he was until earlier this year. Compositions of his sprinkle current hymnbooks on both sides of America’s major Lutheran divide. They teach as Paul taught and as Luther discovered: “The just shall live by faith.”

Our contributing writer, Jill Peláez Baumgaertner, is Professor Emerita of English and former Dean of Humanities and Theological Studies at Wheaton College. After her retirement she also served there as acting provost. For 25 years she has been the poetry editor for The Christian Century. She and her husband Martin have been members for 40 years of Grace Lutheran Church in River Forest, Illinois.

Jill was also among the outstanding presenters who graced our Crossings conference in 2016. The topic then was the work of the Holy Spirit. In a mere three months we’ll be meeting again in a two-day seminar on “The Promising Community.” If you haven’t signed up for it yet, see our website. We’d hate to miss you!

Carl F. Schalk, Professor Emeritus of Music at Concordia Chicago, was my closest friend outside of my family. He died early this year, leaving friends and family bereft but not without resurrection hope. Carl was the kind of friend everyone should have at least once in their lives. Our conversations through the years and in multiple locales around the world never ceased to be energetic, interesting, and downright fun. I don’t think I have ever laughed so much with anyone else. In fact, the three of us—my husband, Carl, and I—were at lunch after church one Sunday and a stranger came up to us as he was leaving and said—I don’t remember when I have ever seen three people enjoy themselves so much as you three.

Carl was a prolific composer, the author of several books on worship, a popular lecturer, and above all, a teacher. Most will have encountered him through his hymns which have been a notable part of Lutheran Book of Worship, Evangelical Lutheran Worship, and Lutheran Service Book. A list of his writings and compositions fills forty pages in Thine the Amen: Essays on Lutheran Church Music in Honor of Carl Schalk.

In 2002 Carl, his remarkable wife Noel, my husband Martin, and I took our first trip together to Hong Kong and Thailand, places he had visited often and knew well. In a Hong Kong stationery store he found elaborate paper cut-outs of stories from the New Testament, and this was the first time he suggested to me that we should become collaborators, using these images from the delicate cut-outs as the inspiration for several choral pieces. I was to write the texts, he the music for a series that was eventually published under the title, “Scenes from the New Testament.” What I discovered in writing these texts was that writing for a musical setting is quite different from writing a poem for a literary journal. Carl’s instructions were always: “Simplify, simplify, simplify.” And I began to understand that text and music must work together—the text should not overwhelm the music, becoming so interested in itself that it actually becomes an obstacle to the singing as congregants or choir members stop and scratch their heads or slow down and take in the loveliness or figure out the oddness of the language. What I have learned from Carl is that sacred music can have unusual language, but no matter what there must be room for the music to redeem and enlarge the text so that listeners or singers are actually free to hear the music. That may seem obvious to musicians, but it is not necessarily obvious to poets—and it is a skill I had to learn from Carl, my favorite taskmaster.

Carl and I talked often—two or three times a week—about music, about poetry, about the oddities that crop up in the world of theological education. And speaking of oddities--he was interested in how a poet thinks and creates because he said that certain odd things cropped up in some of my poems for his music. I am not by any stretch of the imagination an expert in hymnody or in choral music. I am sure he wrung his hands frequently over my work. But he never was impatient or critical. He would raise questions about the way I handled a line or used a word, and only occasionally would he insist on a revision. I learned quickly that even when writing about the infant Jesus, he never wanted to use the word “baby,” which he felt was unsingable. He also teased me for years about my use of the word “facile” in one of our collaborations.

While my Lutheran roots are deep (I consider myself a 16th century Lutheran in many respects), I have also been a part of a vibrant evangelical community at Wheaton College for over 40 years, and there are certain influences which occasionally seep into my writing, much to the chagrin of many of my Lutheran friends. For example, Carl once asked me to write the text for an Easter carol. The refrain I wrote was, “Feel the mystery of Christ’s absence”—which became, as the resurrection story unfolded in subsequent stanzas, “Feel the mystery of Christ’s presence.”

“Jill,” Carl said to me with a grin. “You’ve been hanging around those evangelicals too long. “Feel”? That might be one word that makes Lutherans squirm.” So I changed “feel” in each stanza to either “mourn” or “sing.” And it is a much stronger text as a result. 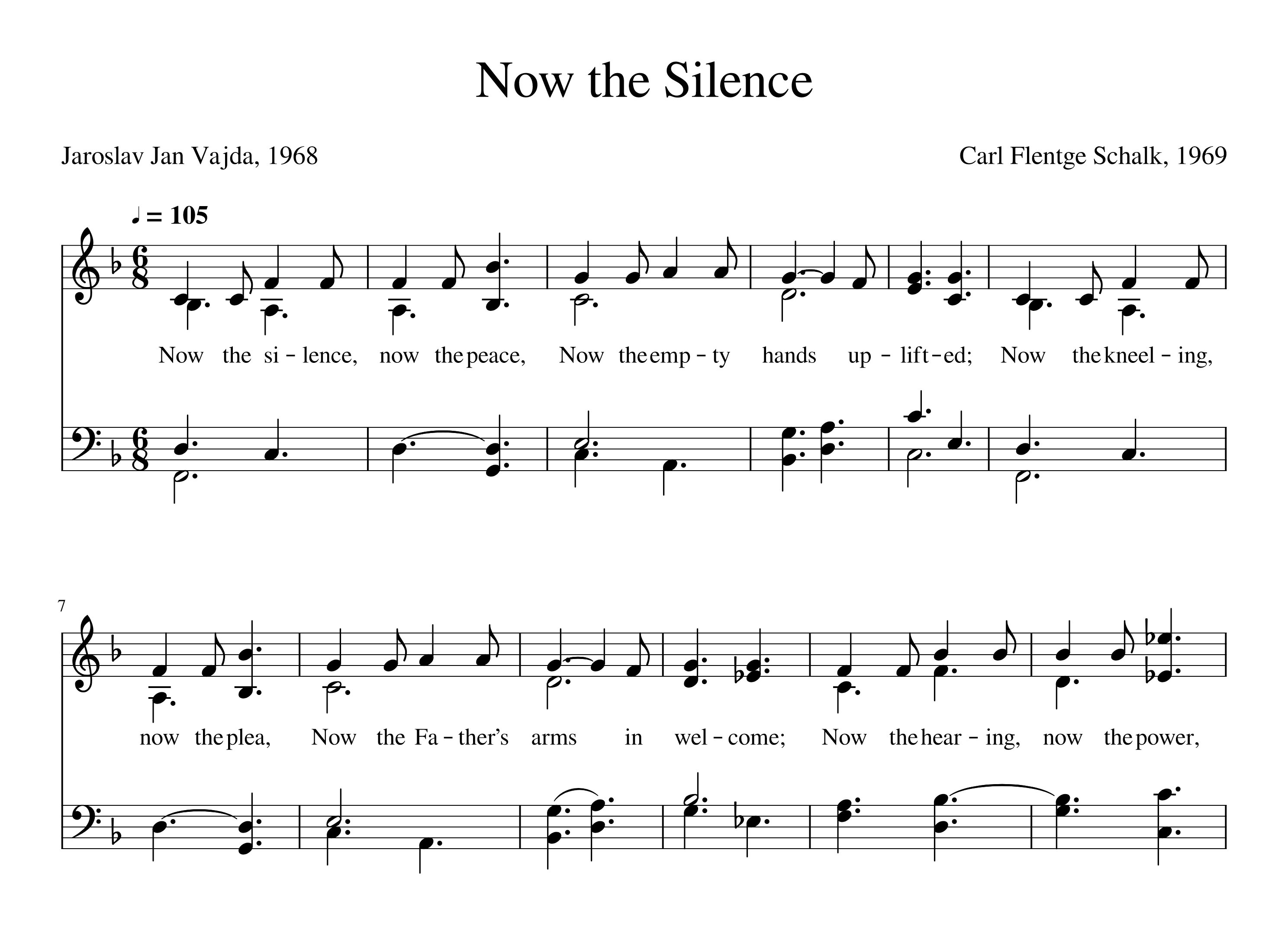 Our world travels continued with trips up the Norwegian coast, a tour of New Zealand, and in 2015 we asked Carl, then 87, if he had the choice of one more big trip, where would he choose to travel. Without hesitation, he said that he wanted to return to the Orkney and Shetland Islands, where he had been three times before. So—in 2016 Carl’s daughter Rebecca Schalk Nagel, my husband, and I accompanied Carl to the northernmost islands off the coast of Scotland. It was a long trip, arduous, but this was the one place on earth he wanted to visit again. Carl loved the mysteries, the landscapes, and the archaeological sites of the islands, and considered with reverence the lives that have inhabited the place for 8500 years and the Creator of those early people and their land. For Carl the Orkneys were not just geographical phenomena. They were holy places which provoked questions, curiosity, reverence, and awe. And they led him to prayer. Before we embarked, he gave me an assignment. I was to write a series of poems on these past-haunted islands, and he would set them to music. I don’t think I have ever worked harder during a vacation, but at the end of ten days I had at least the drafts of eight poems. Carl had asked that I write about what I saw and what I found on these islands and use the canonical hours as a structural device. The result was “The Orkney Psalms,” which he set with his typical lyrical, haunting melodies. The suite was performed twice by the Oak Park Concert Chorale during the spring of 2019.

In the last years of his life, Carl worked unceasingly on new music and on several books, even though his vision was seriously diminished by macular degeneration, which obliterated the center of whatever he was looking at. International travel became impossible for him, but we managed to take a road trip through Wisconsin, Iowa, and Minneapolis, visiting sites of his early music ministry. When I wrote a series of poems based on the five Reformation solas, I included Carl in the final Soli Deo Gloria.

The composer’s vision lacks centers, he says,
The music he writes must fit into his peripheries.
Even so, God’s glory dazzles the scores like an ocean’s
Pageantry of light. What he cannot see, he hears,
And now in the back seat of my car as we travel
To churches of his early ministry, find organs
He once played and choir lofts filled with ghosts
Of voices he schooled, he quotes Milton:
“When I consider how my light is spent.”
He has its music already in his head.

We cannot fix our gaze and see it all through close
Scrutiny in full light. We must catch it in a sideways
Glance, tilt into it, and snatch it at an angle.
Otherwise we are blind to it, too dazed by this world
To take it in. We work with these few images
And music heard only by those whose vision
Is too dim to see. God’s glory is rampant and stretches
Us to heaven. Our reach is short. Our toes grip earth.
But we have glimpsed reality and heard its music.

Carl is still very much with us. Whenever we sing “Thine the Amen” or “Now the Silence” or hear his rhapsodic “Before the Marvel of this Night” Carl is present, his spirit infusing the music in a way no other composer of sacred music can equal. He stands in a long line of Lutheran composers reaching all the way back to Bach.