Our writer this week is Chris Repp. That’s Chris as in the Rev. Dr., pastor of Grace Lutheran Church, Champaign, Illinois; also a long-serving member of the Crossings board, convener of our biweekly Book Club (drop him a note if you’d like to join), and one of the writers who produce our weekly text studies.

Chris spent a week this past August in Columbus, Ohio, as a voting member of a churchwide assembly of the Evangelical Lutheran Church in America (ELCA). When he got home his local bishop asked him to write up some thoughts about this. Three weeks ago, Chris invited us to share those thoughts with all of you too. Here they are.

Two other quick notes this week:

First, our friend and colleague Steve Kuhl has dealing with some grave medical issues occasioned by a Covid infection. Please keep him in your prayers.

Second, Matt Becker of Valparaiso University sent word recently that his translation of Edmund Schlink’s Ecumenical Dogmatics is slated for publication next month. You can pre-order at Amazon. More on this in a forthcoming post.

Reflections on the ELCA’s 2022 Churchwide Assembly

The assembly took place in the same venue that hosted the ELCA’s Constituting Convention in 1987, 35 years ago. I was in seminary in those days, in my third year, and was recruited by our worship professor, who was in charge of the various worship services for the convention, to be a participant. My role during the opening worship service was to carry a five-gallon jug of water in procession for presiding bishop Will Herzfeld of the Association of Evangelical Lutheran Churches (AELC), the church body I belonged to, the smallest of the three that were joining to form the ELCA. The presiding bishops of the American Lutheran Church (ALC) and the Lutheran Church in America (LCA) also had seminarians carrying jugs of water for them, and at the remembrance of baptism they simultaneously poured the water from our jugs into a single large font. 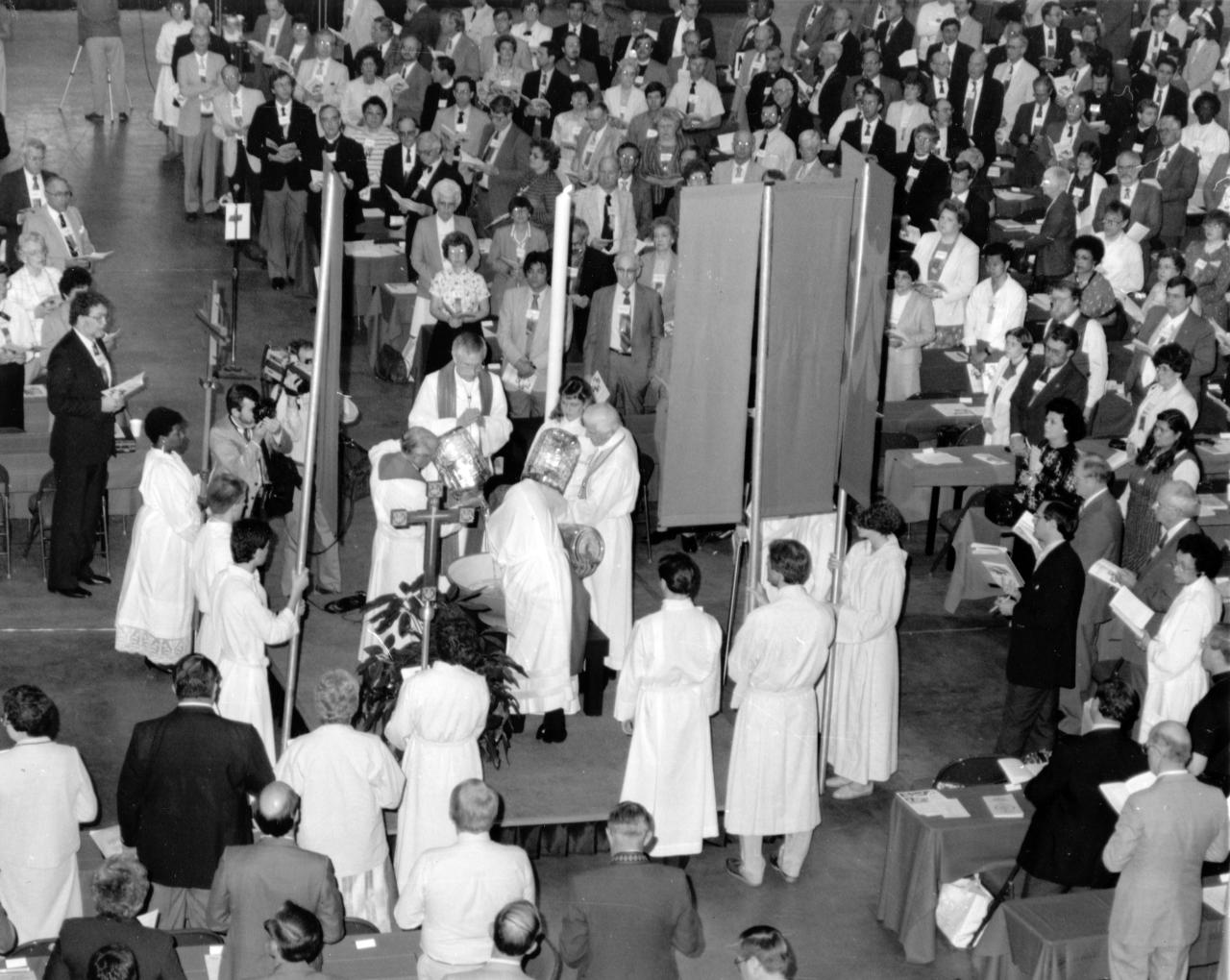 Opening Worship at the ELCA Constituting Convention, April 30, 1987. Photo accessed from https://www.flickr.com/photos/elcaarchives/6147972235/in/photostream/ on October 3, 2022. (Bishop Herzfeld is at the font, just to the right of the processional cross, with his back to the camera. I am behind him, to the right, also with my back to the camera.)

That experience gave me some perspective as I returned to Columbus, Ohio, for this year’s assembly. What did I notice? First, in 1987 one of the exciting possibilities before the assembly was electing a woman as our first presiding bishop. Pastor Barbara Lundblad emerged as one of the final four candidates for that call at a time when no woman had yet held the position of bishop or its equivalent in the predecessor church bodies. By contrast, at the assembly this year we needed to elect a vice president after the untimely death of Mr. Bill Horne last summer. Early in the voting there was a possibility that all of the four officers of the ELCA would be women. So, in thirty-five years we have gone from being intrigued by the possibility of a woman leading our national church body to broad acceptance that women can be elected or called to any position of leadership in our church that a man can be elected or called to.

The second thing I noticed was the racial and ethnic diversity of the voting members. To be sure, we are still an overwhelmingly white church body. But we are electing people of color as our voting members in percentages well above their representation in the church as a whole. We were trying already in 1987 to broaden our diversity, and 35 years later we are still trying. That is encouraging to me.

The third thing I noticed was how many young people there were among our voting members who are passionate about moving our church faithfully into the future of a changing world. Again, I’m going to guess that their representation was far above the percentages of active participants their age in our congregations. But here again, I find it encouraging first that we have such people in our church and second that we are entrusting them to help lead us.

I know that articles like this are meant to end on a positive note, but I need to include one last observation that I also posted on Facebook on the last day of the assembly in response to a friend asking what my takeaways were. After writing a single-sentence condensation of the previous two paragraphs, I then wrote this: “We [as a church] have trouble imagining and articulating the gospel in ways that don’t collapse back into law, which is a perennial problem, and less encouraging.” 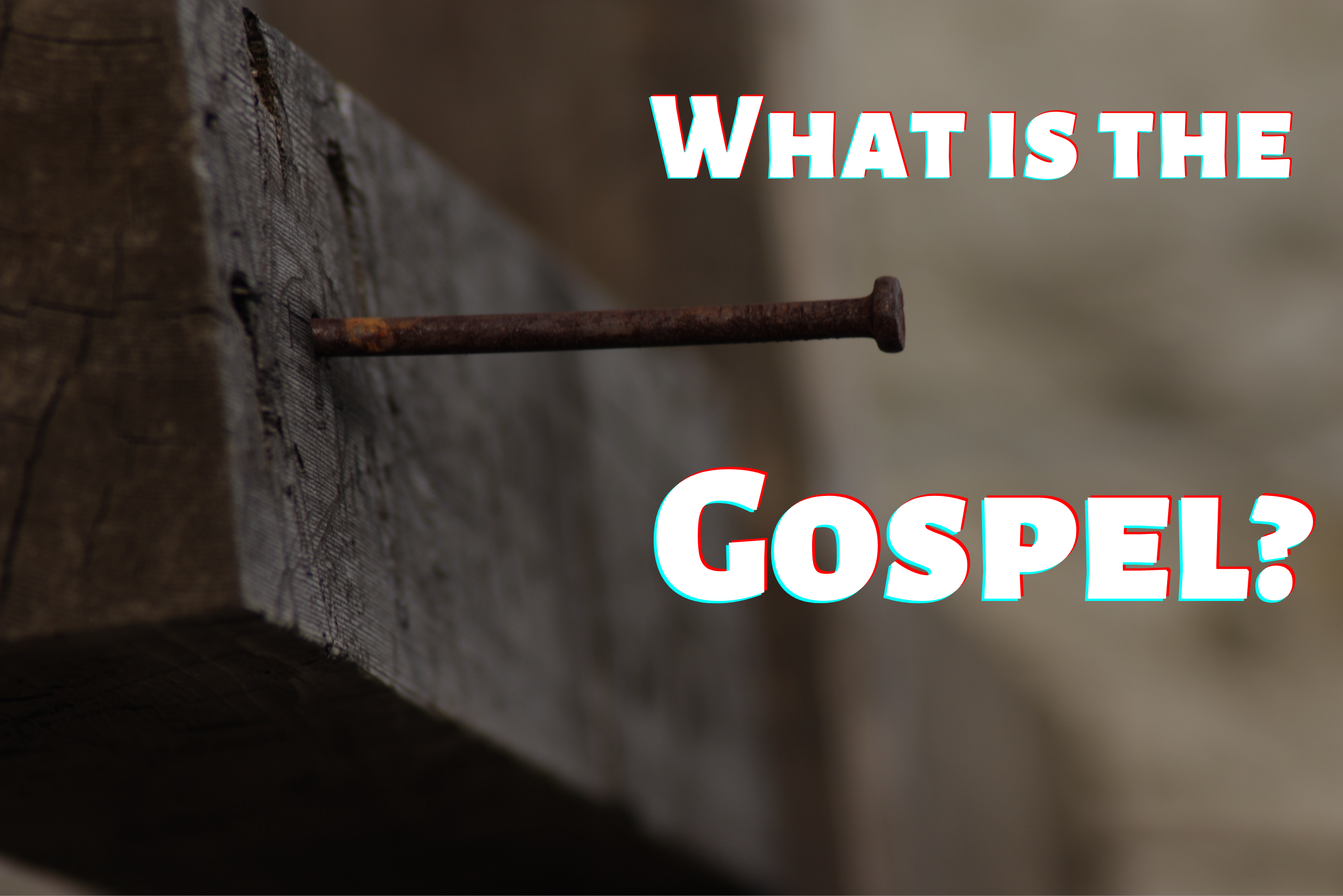 What is the Gospel (from Canva)

What I meant by this is that both in presentations and sermons I heard again and again that the gospel is about things we have to do: addressing structural and historical racism, for instance, or combatting poverty and injustice, or being inclusive of all people, and so on. I want to be as clear as I can be that all of those are things I want to see the church doing, but not as a new legalism. Martin Luther warned his followers not to make Jesus into a new Moses, as if all Jesus did was bring us newer and better laws to replace the old ones. The gospel is the promise of reconciliation with God and our fellow human beings that Jesus accomplishes for us through his death and resurrection, forgiving our past sins, and freeing us from the power of sin, death, and evil.

When the church is clear about this as the gospel and when it centers its life around the church-defining task of proclaiming it, then we find not that we have to do all those good things above that we too easily confuse with the gospel, but that we get to do them, we want to do them, we can’t help but do them. The real gospel is the power of God, the vehicle through which the Holy Spirit transforms our lives by creating faith in us that trusts God’s promises and aligns our wills with God’s. My hope for the ELCA is that we would start acting as if we believed these key insights of the Lutheran movement that I’ve just attempted to summarize, and that we would resist the ever-present temptation to take matters into our own hands. It has to be “God’s work, our hearts” first, and only then “our hands.”