Our mission correspondent, Richard Gahl, returns this week with a quick missiocentric tour of the Gospel of Mark, the one that those of us who follow the Revised Common Lectionary are hearing from at church this year.

Mission in the Gospel of Mark

In previous posts I examined the Gospels of Luke and Matthew in light of their presentations of the mission of God for the world. Here I explore the Gospel of Mark.

The tradition of Papias, second century A.D., identifies Mark as a disciple of Peter who wrote his Gospel for Christians in Rome, the city Paul addressed in his Epistle to the Romans which N. T. Wright dates in 56 or 57 A.D. It is likely that Mark was written within ten years of Paul’s letter, as early as the late 50s or mid 60s. Romans 16 is a listing of greetings with insights into the organization of the Christians in Rome. Roger W. Gehring identifies as many as seven house churches in Rome beginning with the church in the house of Priscilla and Aquila (Rom. 16:3) who had already hosted house churches in Corinth and Ephesus. Those house churches in Rome were likely various blends of Jewish and Gentile faithful. (Gehring, House Church and Mission: The Importance of Household Structures in Early Christianity (Peabody, Mass.: Hendrickson Publishers, 2004.)

A quick note on the introduction of Phoebe (16:1), whom Paul describes as a deacon from the area of Corinth called Cenchreae. Written materials like the letter to the Romans and the Gospel of Mark were set forth in all capital letters with no spaces between words and no punctuation between sentences or identification of paragraphs. It was common practice for the individual bringing the correspondence to a new group to be able to read and to have sufficient knowledge of the contents of the material to present the document cogently to the listeners. This was the critical role of Phoebe for the house churches of Rome. Tychicus fills this role in the letters to Ephesus and Colossae. We are not told who first brought the Gospel of Mark to Rome. It is possible that Mark composed the treatise while residing in Rome. We simply do not know. 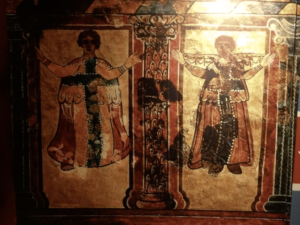 But we do know from the contents of the Gospel that the mission of God was inclusive for all people. The format makes that clear, suggesting that the house churches in Rome respect and honor the diversity of the faithful community.

1. Mark does not include an account of Jesus birth like Matthew and Luke. Instead, in language reminiscent of the creation in Genesis, he starts off with a new “beginning,” a report of a new creation. “The beginning of the good news of Jesus Christ, the Son of God.” After the introduction of John the Baptizer, we see Jesus baptized by John in the Jordan. The Spirit descends on him like a dove. And the voice from heaven identifies Jesus as “my Son, the Beloved; with you I am well pleased.” Interestingly, the Old Testament reading for the Baptism of Jesus in Year B of the Revised Common Lectionary is the beginning of the Genesis creation account. Echoes of creation repeat in the accounts of the actions of Jesus in quieting the raging storm waters in 4:41 and 6:51. (“even the wind and sea obey him”; “they were utterly amazed,”)

2. Mark 1:1-14 stand as the summary statement of what Jesus will be doing in the new creation. “Now after John was arrested, Jesus came to Galilee, proclaiming the good news of God, and saying, ‘The time is fulfilled, and the kingdom of God has come near; repent, and believe in the good news.’”

3. In short order Jesus selects the first four of the team that will now “fish for people.” Simon and his brother Andrew are listed first followed by James and John, the sons of Zebedee. The first reported proclamation of the good news happens in Capernaum’s synagogue where the assembly is astounded by Jesus’ teaching. When he heals a man with an unclean spirit who is present in worship that day, astonishment turns into amazement. Now Jesus’ fame begins to spread throughout the surrounding region of Galilee. Capitalizing on this, Jesus leads the team of four to the neighboring towns, “for that is what I came out to do.” (1:38-39)

4. In chapter 3 the team is expanded to twelve, who for the first time are named “apostles” (3:14). The word assumes that they will be sent out to expand the reach of the good news. With chapter six that sending occurs. Jesus sends them out two by two (Mk. 6:7). “So they went out and proclaimed that all should repent. They cast out many demons, and anointed with oil many who were sick and cured them” (6:12-13). In 6:30 they return to Jesus, “and told him all they had done and taught.”]

5. Three pairs of incidents in the next chapters illustrate that this news of a “new beginning” is for all nations, not just for Jews. In the first of the pairs, Jesus and company step outside Galilee to the land of the Gerasenes (chapter 5). He heals a man long bound by an unclean spirit. When the now healed man wants to tag along with Jesus, he is told: “Go home to your friends, and tell them how much the Lord has done for you, and what mercy he has shown you.” Next they cross back into Galilee and Jesus heals the daughter of Jairus, the leader of the synagogue. The second pair of incidents involves the healing of the daughter of the Syrophoenician woman (7:24ff) and the blind man at Bethsaida (7:31ff). The first happens among among the nations and the second in the community of Israel.

6. The connections of the third pair, the two feeding miracles, are easily overlooked in the context of mission. In chapter 6 we see the feeding of the 5000. Jesus has compassion on the crowds that followed him. Far from a shopping center, the disciples scramble up five loaves of bread and two fish which becomes a meal satisfying all. The leftovers were gathered into twelve baskets—the word for basket is a typical Jewish word. In chapter 8 Jesus is with another crowd in a deserted place. Again, he is described as having compassion on these people who have been with him for three days and have depleted their provisions. This time the disciples are able to muster up seven loaves and a few small fish. The seven baskets of leftovers are gathered into creels, a Greco-Roman word for a large basket that could hold as many as 50 loaves of bread. Both events are signals of Gods bountiful care for his people—Jew and Gentile.

7. There are also three reports during Holy Week that reinforce the focus of Jesus mission beyond the Jews. In the temple scene where Jesus overturns the tables of the money changers (chapter 11), Jesus reminds the assembly that “My house shall be called a house of prayer for all the nations.” (v. 17). In a time of teaching on the Mount of Olives Jesus tells his disciples that the coming birth pangs should not deter their purpose as apostles: “And the good news must first be proclaimed to all nations” (13:10). On being “anointed” in the house of Simon the Leper at Bethany Jesus declares: “Wherever the good news is proclaimed in the whole world, what she has done will be told in remembrance of her” (14:9). 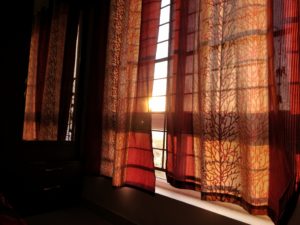 8. It should be noted that when Jesus comes out the water at his baptism he sees heaven “split open” (1:10). In the moment he dies, the great temple curtain is “split in two” (15:38). The use of “split” (God’s Word Version; “tear” in NRSV) in both places is surely deliberate, serving to connect the two episodes. The new beginning launched at Jesus baptism is not stopped but continued by his death.

9. It is generally held today that the Gospel of Mark ends at 16:8. It is Easter morning. The women have left the empty tomb and encountered a messenger who gives them a message to pass along in turn: “Go and tell” Peter and the others to meet Jesus in Galilee. And now the abrupt conclusion: “[The women] didn’t say a thing to anyone, because they were afraid.” Two additional endings of Mark appear in later manuscripts of the New Testament. Neither is judged to be original. One is commonly appended in brackets in New Testament translations (16:9-20). Among other things, it tells of an encounter in Galilee between Jesus and the disciples, and includes a commission to “Go into the world and proclaim the good news to the whole creation.” This addition was the traditional reading for Ascension Day for many years of church history. I will pick up on this text later in May with an examination of one of the sermons Luther preached on that festival.

Certainly, much more might be written about the mission of God as presented by Mark. The purpose here is to underscore how good news for all the world, not just for Israel, is a key component of Mark’s message. He wants the congregation in Rome to understand it and it live it out as evidence of the new creation God is making in Jesus Christ.