Luther’s Infamous “On the Jews.” An Assessment (Part 2) 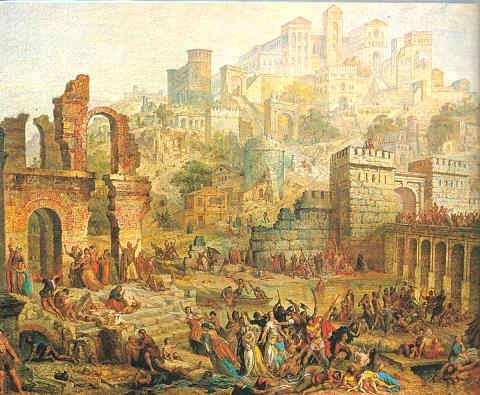 This week we bring you Part 2 of Kurt Hendel’s essay on Luther and the Jews. As he laid out in Part 1 last week, Kurt’s goal here is “to summarize Luther’s attitude toward and comments about the Jews, analyze the potential reasons why he wrote what he did, and offer necessary critiques,” while keeping in mind that, “for clear theological and ethical reasons, people of faith should not seek to make excuses for Luther, defend him, or justify his proposals regarding the Jewish people during the last years of his life.”

In this second part, Kurt directly confronts Luther’s 1542 tract, On the Jews and Their Lies. As you’ll see, he interprets Luther’s theological motivations while also drawing attention to an underlying racial animus that distinguishes Luther’s reprehensible prescriptions for treatment of the Jews from his approach to others he saw as theological enemies.

We thank Kurt again for his contribution to Thursday Theology, and we welcome any responses to his analysis.

Luther and the Jews
Part 2
by Kurt K. Hendel 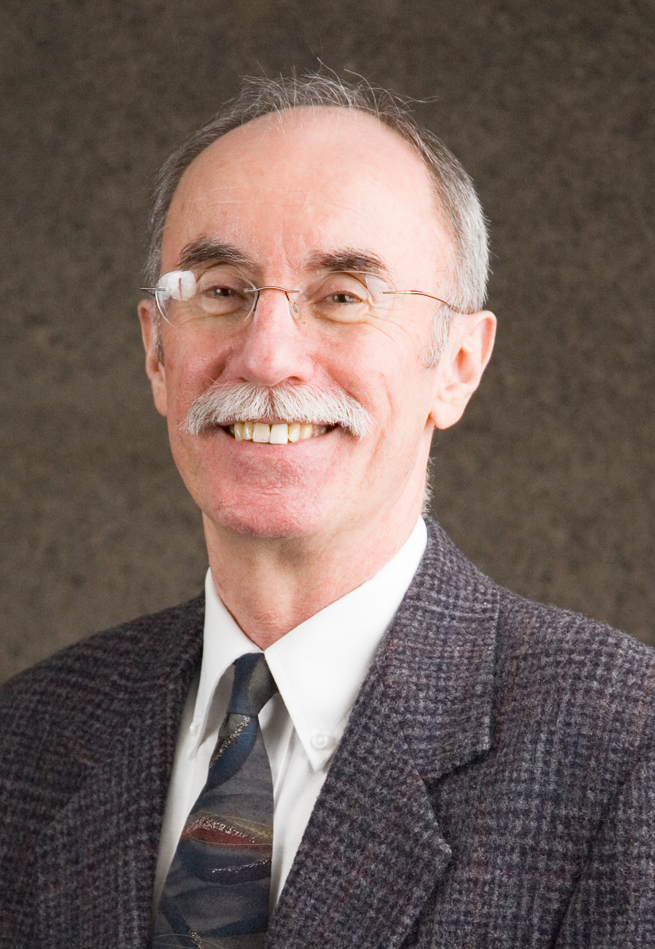 Christian attitudes toward Jews did not change as a result of Luther’s treatise. Jews were not welcomed back into territories from which they had been expelled, not even to Electoral Saxony. The various tales about secret Jewish mistreatment of Christians persisted. The faithful proclamation of the gospel by the Reformers did not result in significant Jewish conversions. Luther also came to believe that Jews, including their chief spokesperson in the Holy Roman Empire, Josel von Rosheim, were taking advantage of Luther’s proposal of gentle treatment by wanting Luther to be an intercessor on their behalf, even as they continued to reject Christ and the gospel. Furthermore, when sabbatarian tendencies began to manifest themselves among some Christian groups, Luther began to believe the stories that Jews were proselytizing Christians rather than converting to Christianity. From Luther’s perspective, Jews were, therefore, leading people away from the gospel into another religious expression of works-righteousness. All of these realities must be kept in mind when attempting to make sense of Luther’s 1543 treatise, On the Jews and their Lies (LW 47:121-306). The treatise was addressed primarily to Christians and sought to prevent Christians from falling prey to the enemies of the gospel and to works-righteousness. This polemical and volatile work is also a bitter critique of the Jews and their faith. At the same time, Luther’s detailed interpretation of Old Testament messianic texts indicates that he was still seeking to convince the Jewish community that their own Scriptures clearly pointed to Jesus as the promised Messiah. In the relatively brief concluding section of the treatise, the Reformer proposed specific ways of dealing with the Jews that are radically different from his proposals in 1523 and that tragically anticipated the brutal treatment of the Jewish people by the National Socialists in Germany during the 1930s and 1940s. While Luther’s attitudes and proposals change significantly during these two decades, it is important to note that his hope for the Jews, namely, that they become Christians and confess Christ, remains the same.

Let me first review the content of this treatise. Then I will offer some possible explanations—not excuses—for Luther’s attitude and proposals. I will conclude with my critique of Luther in light of his own theological and methodological perspectives.

The treatise consists of four parts:

Then he proposes that the temporal rulers do the following:

a. Burn the Jewish synagogues and schools because the public blasphemy that occurs there cannot be allowed.
b. Destroy the homes of the Jews and house them in barns in order to remind them that they are exiles since they have no land and are forsaken by God. The homes are also places of blasphemy.
c. Confiscate Jewish writings that contain their blasphemous lies.
d. Prevent the rabbis from teaching. Just as the priests have misled Christian people, so the rabbis mislead the Jewish people as they misinterpret their own Scriptures.
e. Withdraw the safe-conducts given to Jews that allow Jews to travel in specific territories in order to carry on trade.
f. Confiscate the money, gold, and silver that they have accumulated as a result of usurious practices, which are legally forbidden.
g. Make them earn a living with honorable trades.
h. Expel them if they are afraid of them. 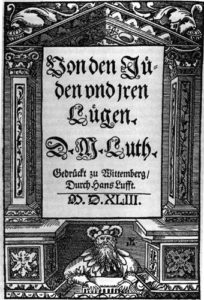 Luther then advises the spiritual authorities that they do the following:

a. Warn the parishioners to guard against the Jews.
b. Do not use any physical force against the Jews since only the temporal authorities have the authority do so.
c. Remind the temporal rulers of their responsibilities related to the Jews.
d. Accept Christ’s criticism of the Jews.
e. Burn the synagogues.
f. Confiscate their books, including their Bibles.
g. Forbid the publication and use of Jewish writings.
h. Prevent them from uttering God’s name since they blaspheme God’s name by blaspheming Christ.
i. Expel them so that Christians are not guilty of the blasphemy that the Jews commit.

After giving this troubling advice about practicing sharp mercy, Luther ends his treatise in a striking and surprising manner, namely, with a prayer for the conversion of the Jews.

Did Luther change his attitude toward the Jews between 1523 and 1543? Yes and no.

How can we explain or at least shed potential light on Luther’s changed attitude toward and recommendations regarding the Jews? His attitude and his proposals in 1523 are a hopeful surprise when one considers the dominant antisemitism that was so prevalent in European society. Thus, Luther breaks with centuries of tradition and practice as he articulates his tolerant and enlightened proposals which are consistent with his evangelical beliefs and practices.

There really is no defense for Luther’s 1543 proposals, although it is possible to offer some potential explanations for why he made them. Luther’s old age and diverse health problems made him intolerant and impatient. Problems and conflicts within Lutheranism and within the wider Reformation movement troubled and frustrated him. He was clearly disappointed that the fruits of proclaiming the gospel faithfully were not always readily apparent, either among Christians or among Jews. He had had some negative experiences with Jews and was particularly concerned that Jews were attempting to take advantage of his good will. He was frustrated that the Jewish people were not converted, even though the gospel was preached faithfully and even though their own Scriptures were witnesses of Christ. He believed the stories of Jewish proselytization and was concerned that former Christians were apparently turning away from Christ. He also had a clear eschatological consciousness which made the preaching of the gospel and the necessity of faith all the more urgent. Anyone who opposed the gospel must, therefore, be ardently opposed, according to Luther.

All of these potential explanations have some merit and help to clarify Luther’s motivations and concerns as he produced his 1543 treatise. I am convinced that Luther wrote what he did for two related reasons. It is important to point out that both are religious and theological. The issues of race and racism are not operative. Luther was not motivated by racial hatred. Having said this, however, I also want to emphasize that a people’s individual and communal identity is often intimately related to their beliefs. Hence, faith, theology, religion, and race are inextricably interrelated.

In my opinion, Luther opposed the Jews, first of all, because he saw them as enemies of Christ and of the gospel. Here Luther is being consistent. He opposed anyone whom he considered to be an opponent of the gospel, whether that person was one of his former supporters, like Andreas Bodenstein von Karlstadt; or the German peasants; or the Swiss Reformer, Huldrych Zwingli; or the great humanist scholar, Desiderius Erasmus; or the Radical Reformers; or the Pope and the Curia. Whoever rejected or even compromised the gospel had to be opposed. It is defensible to say, then, that Luther was not a racist who hated the Jewish people because of their race. He did not call for their persecution because of racial bigotry; rather, he did so because of his ardent desire to witness Christ and to defend the gospel. That is, of course, ironic and tragic. Nevertheless, Luther’s writings indicate that his motivation was religious, spiritual, and theological. He rejected the religious beliefs of the Jewish people. It must also be noted, however, that Luther repeated racist stereotypes about the Jewish people in the 1543 treatise, as well as in letters and other writings. He also encouraged that the Jews be persecuted for their faith. He did not urge such persecution of fellow Christians who, in his view, compromised the gospel and opposed his theological and ecclesiastical reforms. Thus, the treatment of the Jews that he advocated was significantly different from the treatment that he envisioned for his Christian opponents, and it does, therefore, suggest racial animosity on the part of Luther. 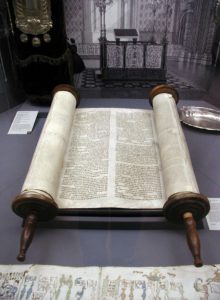 Secondly, it is quite likely that Luther felt compelled to make his radical proposals in 1543 because he was concerned about blasphemy and was aware of the Old Testament warning that blasphemy dare not be tolerated within the community of faith and that those who tolerate it or associate with the blasphemer are guilty of blasphemy as well. By rejecting Christ and denying that He is Messiah and the Son of God, the Jews were guilty of blasphemy in Luther’s eyes. Therefore, he could not tolerate their teachings. They had to be silenced.

Even if one accepts that these are accurate and cogent explanations for Luther’s urging of sharp mercy in 1543, his specific proposals cannot be defended. Indeed, Luther may be criticized on the basis of his own understanding of the gospel and his own methodological principles. The Reformer always insisted that Christians must be faithful to the gospel. The gospel can never be compromised. He also insisted that God alone can bring people to faith and that God accomplishes this solely through the preaching of the gospel. Therefore, Luther counseled that in matters of faith and conscience, the use of force should be avoided, and the only “sword” that should be used, because it alone is effective, is the sword of the Holy Spirit, namely, God’s word, particularly the gospel. Only then will people come to faith. Only then will they be converted and justified. Only then will they be able to confess Christ.

What, then, should Luther have counseled, even if he was frustrated with the Jews and deeply concerned about blasphemy? In order to be consistent with his own theological convictions and methodological principles, Luther should have recommended that Christians do the following:

In short, Luther should never have advocated that the Jews be persecuted for their faith. Rather, he should have continued to preach the gospel faithfully and left the rest in God’s hands. Furthermore, since Luther also repeated the anti-Jewish stereotypes that he had rejected twenty years earlier, one can argue that Luther became an anti-Semite during the latter years of his life and that he promoted persecution of the Jewish people, not only because they opposed Christ and the gospel, but also because of who they were as a people, as an ethnic community, as a race.

It is ironic and a sign of the power of sin that Luther contradicted the gospel even as he sought to be loyal to that gospel and to be a faithful witness of Christ. He would have been more faithful and more consistent with his own evangelical principles and convictions if he had never abandoned his 1523 stance. He should have remembered that his hope that the Jewish people would be converted and would consequently confess Christ could only be achieved if he and his fellow Christians preached Christ faithfully and served the neighbor, including the Jewish neighbor, in love. That was Luther’s own belief, and he should have been consistent with his own faith.

We have much to learn from Martin Luther, both negatively and positively.